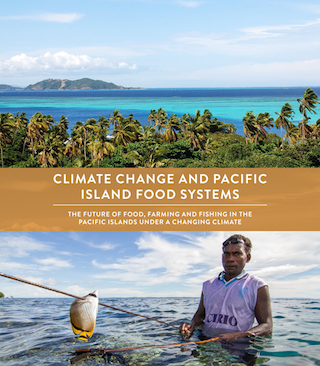 This World Oceans Day, we must remember one of the most important things the Ocean offers us: food and sustenance. Yet climate change is set to wreak havoc on the Ocean's ability to sustain us, and nowhere is this more evident than in the Pacific Island Region. A new report released today highlights the most pressing issues facing this region, while shedding light on potential opportunities to be gained under climate change.

The 22 Pacific Islands countries and territories are at the frontline of climate change. They are termed "small island states" in the language of the climate negotiators - It helps to think of them as 'large ocean states', as oceans make up 98% of their combined jurisdictions. Rising sea-levels, ocean acidification, more violent tropical cyclones, rising temperatures, and more frequent droughts are all on the horizon, and food, fishing and farming will suffer these impacts first. This puts increasing pressure on fishers and farmers who produce staple foods for local consumption as well as valuable export crops and fish that we all know and love.

Fisheries under climate change
Fishis an important source of protein in many places across the regionand more than 30% of the world's tuna is caught in the Pacific Island region. The ever-popular skipjack tuna, which nourishes Pacific Islanders, and is a staple at sushi bars worldwide, is one species that will be impacted. Warming waters in the tropical Pacific will impact its distribution, causing a progressive shift eastward. It will become more difficult for people in the western part of the Pacific Island region to benefit from this important fish. Higher sea temperatures and ocean acidification will result in degradation of coral reefs, reducing their ability to support fish, and potentially causing a 50% decline in coastal fisheries by the end of the century. In contrast to coastal fisheries, freshwater aquaculture in the Pacific Islands may win out under climate change, as conditions to grow Nile tilapia improve due to warming air temperatures and increased rainfall. 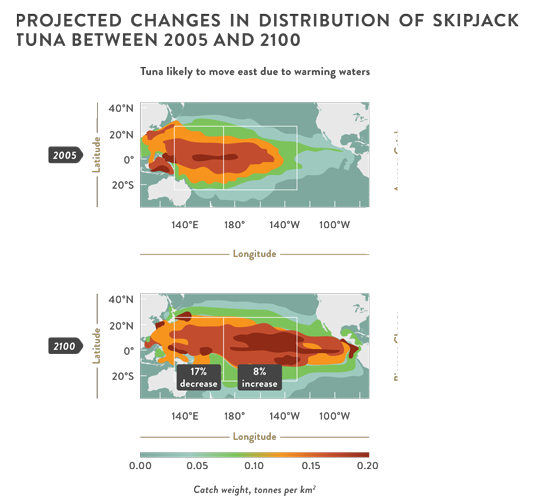 Crop production under climate change
Changes in temperature and rainfall will affect some crops more severely than others, reducing yields of important staples and potentially hurting incomes. Of the major cash crops, coffee is projected to be the most susceptible to global warming. The good news is that some Pacific staple food crops - such as breadfruit, cassava and giant taro - are more climate-resilient, and could be an important part of the solution. 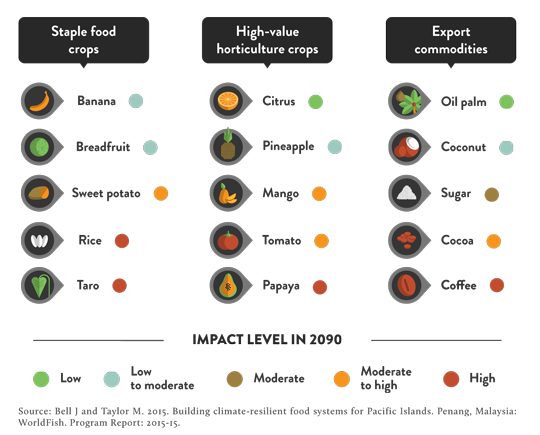 Food security already at a tipping point
Pacific Island societies already face food insecurity: the diets of rapidly growing urban population are shifting towards cheaper and less nutritional imported food such as white rice and wheat. The toll is already being felt, with some of the highest rates of obesity and diabetes in the world. Climate impacts on global wheat and rice production could increase the costs of these imported food products. The upshot of this may be a renewed focus on the more climate-hardy Pacific staple food crops, and focusing on good management of the region's rich tuna resources. 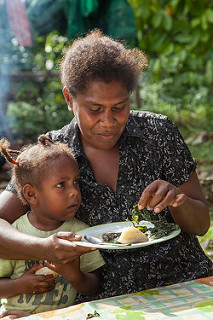 Looking for solutions... together
While global measures like the Paris Climate Agreement are essential to push all countries to mitigate climate change and limit warning below a 1.5 degree threshold, local solutions will be vital to ensuring that Pacific Island Countries adapt and thrive under climate change. In the first place, people must be ready to take advantage of any favourable impacts of climate change, while also developing alternatives to the most highly threatened crops and fish. To achieve this, further research needs to be done in each country to implement priorities to adapt fishing and farming, based on the projected impacts of climate change, anticipated food needs, all the while harnessing traditional knowledge, and building on current production methods.

To tackle uncertain futures, innovative approaches are needed to envision how different changes may play out on the ground, and governments, development agencies, communities and farmers will need to work together to develop solutions and new paths forward. Communities in the Pacific, under the guidance of the Pacific Community have already taken the first step in visioning the future by developing four contrasting scenarios - Tug of war; Living on the edge; Cash now, pay later; and Crisis in paradise - that tell the story of different development pathways. Vividly illustrated in the report and in an animated video, these scenarios will ultimately prove useful for developing and testing plans and strategies.

What happens in the Pacific Islands matters for the rest of the world - beyond threatening our morning coffee and beloved sashimi. We need to fight climate change at its frontlines, whether in our backyard or an ocean away.