What does it matter if a smallish, tuft-eared wild cat native to Spain disappears? Extinction is a natural process, after all.

In a study published Monday in the journal Nature Climate Change, researchers concluded that the Iberian lynx, an already critically endangered species that once flourished in parts of Spain, France and Portugal, is likely to succumb permanently to decades of overhunting, habitat loss, disease and, in a final decisive blow, climate change. As is the case with the complex, interdependent machinery of any ecosystem, it would seem that rising temperatures are decreasing the availability of the lynx's primary food source, the European rabbit. No food, no lynx.

The scientists speculated that, absent some swift intervention, the Iberian cat would be gone from the wild in 40 years -- the first extinction of a wild cat species in 2,000 years, according to the environmental group WWF.

One reaction to this sort of thing is, so what? It's the circle of life. Extinction happens.

Such has been the position of folks like Viv Forbes, an Australian geologist and chairman of the Carbon Sense Coalition -- a group of climate change denialists apparently set up to combat what it characterizes as the "unjustified vilification of carbon by politicians and the media." (Poor carbon.)

"[S]pecies extinction, like climate change, is the way of the world," Forbes wrote recently at the popular climate skeptic site Watts Up With That? He continues:

Sadly, history shows that it is the destiny of most species to be destroyed by periodic natural calamities or competition from other species. Earth's history is a moving picture, not a still life. No species has an assured place on Earth. Some species can adapt and survive -- those unable to adapt are removed from the gene pool.

Species extinction events are not new, are not caused by burning carbon fuels, and will probably occur again. We will need all of our freedom, ingenuity and technology to survive. Let us not hasten our own species extinction by starving ourselves of food and energy with foolish demonization of carbon, the building block of all life forms.

It's true that species extinction events are not new. That such events are not being driven and accelerated by human activity -- including the burning of fossil fuels -- is, by most scientific accounts, complete nonsense. 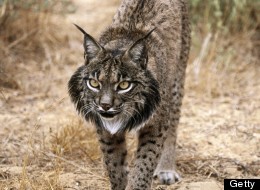 Unless something changes, the Iberian lynx of Spain will be extinct in 40 years -- the first big cat to disappear in the wild for over 2,000 years, researchers suggest.
Advertisement

As indicated by the Living Planet Index -- a measure of the richness and diversity for more than 1,800 species of fish, amphibians, reptiles birds and mammals -- planetary biodiversity has been in steady decline since the 1970s. This includes a reduction in terrestrial biodiversity of about 25 percent over the measured time period, and drops in freshwater and marine diversity by 29 percent and 28 percent, respectively.

Earlier this month, the Geneva-based International Union for Conservation of Nature published its latest assessment of tens of thousands of threatened species. Among other things, the group noted "worrying declines for conifers -- the world's oldest and largest organisms -- freshwater shrimps, cone snails and the Yangtze Finless Porpoise."

The Santa Cruz pupfish and the Cape Verde giant skink (a lizard) were among new species declared to be extinct, the IUCN noted.

To be sure, there's no definitive way of knowing which species are falling victim to the natural background cycles of extinction and speciation that have prevailed for millennia. And there is ample indication in the geologic record to suggest that even major extinction events, in which substantial percentages of planetary species disappear, are nothing new. But a good deal of evidence also suggests that one species -- humans -- might well be contributing to a major extinction event underway right before our eyes.

Indeed, from California, where some 82 percent of native freshwater fish are facing extinction as water temperatures rise, to China, where human pollution and industrial activity has already rendered the Baiji dolphin functionally extinct, the disappearance of animals large and small is demonstrably accelerating.

Numbers vary across the taxonomic spectrum, of course, but some research has suggested that the historical background rate of extinction has typically been on the order of one to five species a year, according to the Center for Biological Diversity. The current rate of extinction, by some estimates, might well be thousands of times that number.

Habitat loss, hunting and localized pollution are often the culprits here. But the most worrisome driver, and the one that's proving most difficult to halt, appears to be rapid changes in average global temperatures brought on by increasing concentrations of carbon dioxide in the atmosphere -- a direct result of humanity's dependence on fossil fuels. And while evolution tells us that life on earth has a tremendous capacity to adapt to changing environments, a growing body of research suggests that current changes in the climate are unfolding far too quickly for many species to adjust.

A study published in June by researchers at the University of Arizona, for example, found that many of the planet's animal species -- from amphibians, birds and crocodilians to mammals, squamates and turtles -- have proved quite adaptable to changes in average temperature that unfolded at a rate of about 1-degree Celsius per million years.

If they hope to adapt to current climatic changes, however -- including the potential for average temperature increases of 4-degrees Celsius over the next 100 years -- the same species would need to evolve 10,000 to 100,000 times faster.

The authors of that study concede the need for additional analysis, and they cite a number of caveats, among them the fact that other research has found some animals are quite capable of far more rapid adaptations when necessary, sometimes on the order of decades.

But the sheer pace at which the current planetary climate is changing would seem to present an insurmountable challenge for many species. "It's almost crazy to think that they're going to, in just a few decades, be more different than they've become over millions of years," the study's lead author, evolutionary ecologist John Wiens, of the University of Arizona in Tucson, told Science magazine earlier this week.

That appears to be proving true for the Iberian lynx, which might easily be overlooked as a mere footnote in a world preoccupied with any number of other problems. But its potential loss offers just one more reminder that humanity may well be laying the groundwork for a very different and far less biologically diverse planet. We might prove able to adapt, in one fashion or another, to a warming world, but it's a virtual certainty that a lot of other life won't be joining us for the ride.

Will we like where we end up? It's a fair question.

"Asking why the Iberian lynx matters is like asking why the Mona Lisa matters," said Luke Hunter, a wildlife biologist who is the president of the big-cat conservation outfit Panthera. "If it disappears, it's never coming back."

Given that the loss of top carnivores like the lynx can have wide and destabilizing impacts across whole ecosystems, the consequences for everything -- including us -- ought not be discounted, Hunter added.

"Pulling a thread in complex ecosystems can have long-term, damaging effects on people," he said, "which we often won't realize until the damage is done."