All In With Chris Hayes (MSNBC) hosted a series looking at how climate change is impacting Americans from Alaska to Florida. Hayes has consistently been on the cutting-edge of bringing environmental stories to his audience.

When I tuned in on Friday to catch the interview with Secretary of State John Kerry, terrorism in Bangladesh had bumped the spot. Hayes noted apologetically, "It [climate change] is not happening in real time although it is one of the most important stories of our time."

Coverage of climate disruption is getting short shrift on network news, according to a recent study conducted by Media Matters for America.

Specifically examined were the nightly evening network news and the Sunday broadcasts. 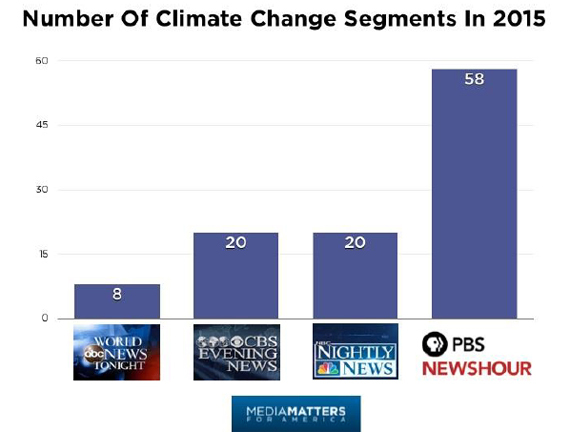 Climate coverage on ABC, CBS, NBC, and FOX "collectively" fell 5 percent from 2014 to 2015. PBS, examined separately, not only led the group in air time coverage, they featured the most stories on Pope Francis's environmental encyclical, the Paris Climate Summit, the Keystone Pipeline, and the Clean Power Plan. They were the only newsroom to look at the reduction of methane emissions and the question of what ExxonMobil knew and when they knew it.

ABC had the greatest dip, featuring a mere thirteen minutes of reporting for all of 2015. Although "coverage" for FOX expanded, the analysis showed the reporting slanted to a negative assessment of efforts to respond to climate change. 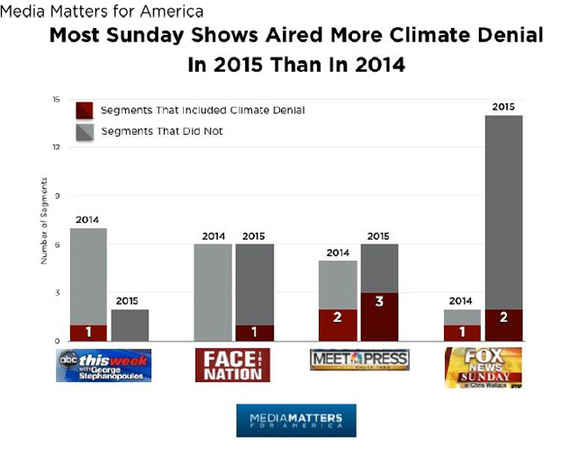 It appears that the most palatable way for the major networks to offer stories on climate change is through the softer approach of how animals, birds, and plants are affected.

America is science-phobic. In international science and math rankings, the United States is twenty-eighth (behind Poland and Latvia) in a list of seventy-six. The electorate needs more science stories, not less. The crucial fallout of the climate crisis is not being adequately parsed. The dots aren't being drawn. Scientists are infrequently featured in news stories. (Exception: Twenty-six scientists showed up on PBS.)

Too many anchors do not challenge against erroneous statements with follow-up questions. This was particularly evident during the Republican primary, when most of the candidates expressed strong doubts about the reality of climate change.

In an election year, this just isn't acceptable. 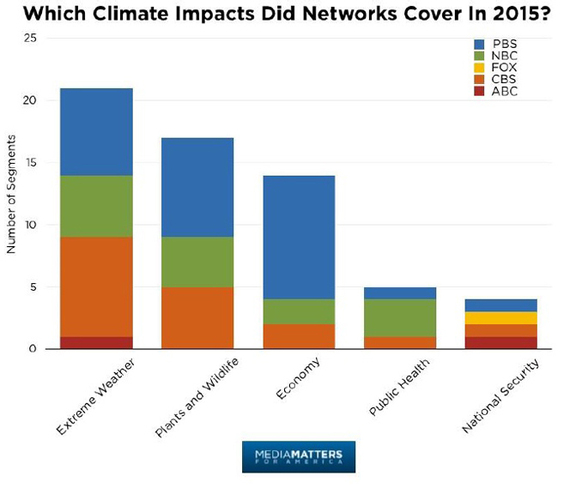 I spoke with Andrew Seifter, the Media Matters Director of the Climate and Energy program, for back story. "Why a focus on nightly network news and the Sunday shows?" I asked him.

While discussing the Media Matters "ethos" of holding media to the utmost standards of behavior, Seifter explained the importance of the Sunday shows in the news cycle.

"Sunday shows have added impact. They are driven by high profile events, and quotes get picked up."

Seifter believes the media is partially to blame for not showing how the real ramifications of climate change is changing lives. "It's the responsibility of journalists," he said.

Denise Robbins, Seifter's colleague, wrote a piece noting that people of color, who disproportionately suffer from toxic sitings and asthma in frontline communities, have minimal visibility discussing their environmental concerns during the Sunday lineups.

Television news is not alone in being called out by Media Matters. They have delved into print, "branded or sponsored content" that is not clearly distinguished from reporting, as well as a prevalent dearth of disclosure.

Seifter penned a blog about The Washington Post running a letter to the editor in which the author maintained, "human-induced global warming is unproven, not an undisputed fact." Back in 2013, a group of ten newspapers said they would no longer print "climate-denying letters." Yet, there seems to be a lot of wiggle room.

The Los Angeles Times was the innovator on that initiative. They are now in a "partnership" with California Resources Corporation, a California oil and natural gas company, producing content for the website Powering California.

Transparency is elusive, especially in editorial letters and on-air comments by pundits from "think tanks" funded by Koch dollars, dark money groups, or those surreptitiously representing fossil fuel companies. "Who is an independent player and who is part of the fossil fuel apparatus?" Seifter questioned.

This past April, in reaction to the overwhelming number of American Petroleum Institute (API) ads run on CNN compared to the news stories about abnormally high temperatures (five to one), Media Matters released their own ad taking CNN to task:

Let's hope that by the Presidential debates, the bar is raised. The American public deserves climate news...now.

Tell Your Governor: Protect Our Children from Air Pollution