Unless you are a climate change denier, it is inconceivable to ignore one of the largest contributors to global climate change -- industrialized animal agriculture. Is it because humans feel the right to eat whatever they want, even with a catastrophic impending disaster looming? Do we continue to ignore the facts to appease our palettes? 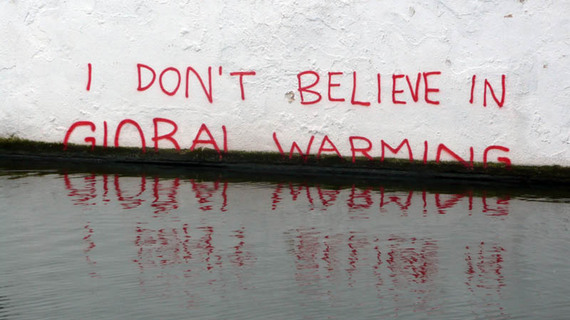 The United Nations Office for Disaster Risk Reduction states that, "Indeed, climate change is no longer considered a problem of the future. According to the Fifth Assessment Report of the Intergovernmental Panel on Climate Change, the effects are already present with a probable increase in the severity and frequency of disasters."

This is not new news; in 2006, a report by the United Nationals Food and Agriculture Organization stated that 18 percent of Greenhouse Gas Emissions (GHG) is attributable to livestock production. As if that wasn't bad enough, later analysis released in 2009 by Robert Goodland and Jeff Anhang stated that the figure was woefully underestimated. The actual figure resembled closer to 51 percent of annual worldwide GHG emissions result from animal agriculture. Now these guys aren't amateurs; Robert Goodland served as the lead environmental adviser for the World Bank Group for 23 years, and Jeff Anhang is a research officer and environmental specialist at the World Bank Group's International Finance Corporation.

In neither report is the word "Vegan" mentioned. I am sure that is because the word generally seems to throw people into a major panic. Co-authors, Goodland and Anhang suggest eating "less meat." But even with this watered down version of this much-maligned word, we still seem to be ignoring this incredibly important factor. A fact that could easily have a dynamic effect on the rapid increase in global warming, more so than even the much touted replacement of fossil fuels with renewable energy. In fact, the production of meat for your plate contributes more to global warming than our entire transportation system combined.

A recent documentary, Cowspiracy, goes a long way to investigate the irrationality of many environmental groups who appear to be choosing popularity with members over fact. If people truly were concerned about global climate change and the environment then ignoring the horrific impacts of animal agriculture let alone the inherent cruelty involved is ... well, alarming and more than a little foolish. Are the vegans the Rachel Carsons of today? Carson who blew the whistle on the serious impact of DDT on wildlife but was viciously vilified for her efforts?

If it's hard to go vegan, how much harder will it be to either endure floods or extreme heat and droughts, which will lead to food shortages and power outages at the very least. If one feels it's their "right" to eat whatever they want then what about the "right" of every being on this planet to live without the impact of global warming? I am not a religious person, but it's hard not to feel we are in the midst of apocalyptic times. According to Hopi prophecy, global climatic changes are inevitable but we humans can still impact the ferocity of those changes. 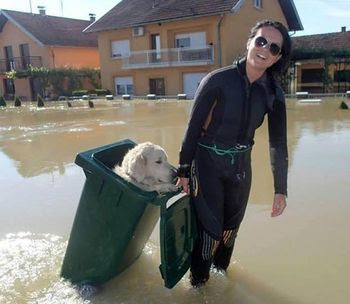 The refusal to address this issue seems like nothing less than obstinacy in the face of utter disaster. It is inconceivable to me that we continue to ignore this fact at our peril. On September 23, there is a global summit for climate change at the UN Headquarters in New York and a Peoples Climate March on Sunday, Sept 21. I wonder if the summit will be vegan? How many people will be feeling good about riding their bikes and taking public transport to the march whilst chomping down on a burger? The People's March is calling for "climate justice," I for one am demanding justice; justice for the millions of sentient beings that live briefly in utter pain and misery and are then killed for profit. Maybe the animal's revenge will be the end of the world as we know it.