Dr. Robert Zarr, her pediatrician at Unity Health Care, a clinic that serves low-income and uninsured families in Washington, D.C., calls her unconventional treatment regimen a "huge success." The 9-year-old's asthma is now well-controlled, and she is no longer obese -- conditions that prompted the prescription, he said. 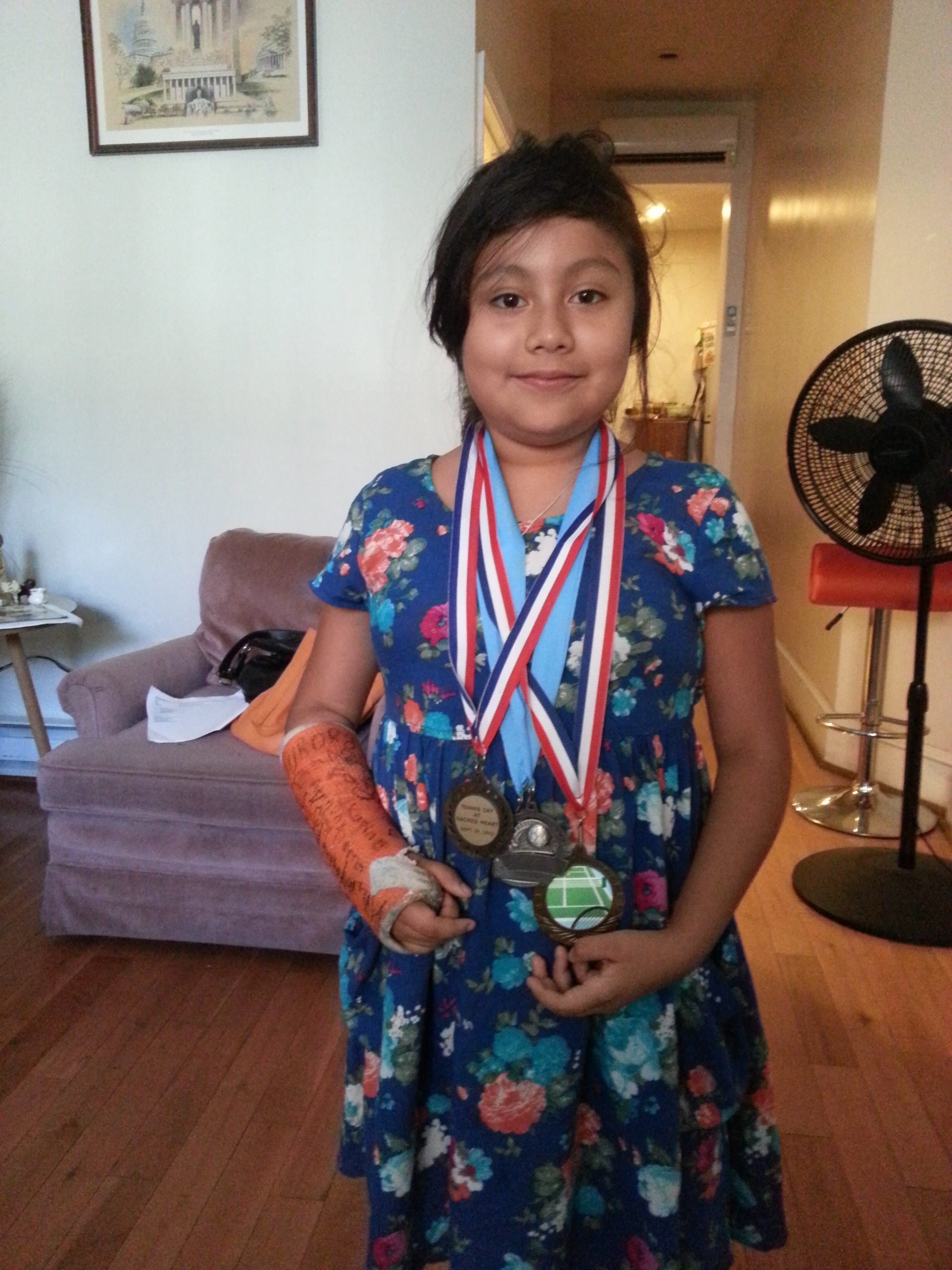 Luisa Maria Vasquez Cruz proudly displays soccer and tennis medals she has won over the past year. (Courtesy of Unity Health Care)

As the list of health benefits linked to time outdoors grows, so too has the trend in doctors enlisting nature in their practices. Zarr's D.C. Park Prescription program has doled out more than 600 prescriptions for nature time since its launch in July 2013 to both prevent and treat health problems including diabetes, depression and attention deficit hyperactivity disorder.

Such care, however, may be harder to sustain in the future -- a reality that is worrying environmentalists around the country. According to an August report by the nonprofit National Wildlife Federation, climate change is creating obstacles that can impede our time in the outdoors -- namely, by increasing the number of pests.

"One of the things contributing to [kids not getting enough play outdoors], along with many societal factors, is that some of the conditions are becoming more difficult to deal with," said Collin O'Mara, president and CEO of the National Wildlife Federation, during a media call last month for the group's report, "Ticked Off: America's Outdoor Experience and Climate Change."

Luisa's hometown of Washington, D.C., is among areas of the country already experiencing a rise in mosquitoes thanks in part to warmer temperatures. The Asian tiger mosquito, in particular, is now abundant in the region and known to transmit more than 30 different infections including West Nile, dengue fever and emerging diseases such as Chikungunya. Pollen counts are also on the rise -- an issue Luisa says has affected her ability to go outdoors in the spring.

Ticks, too, are on the march northward with the changing climate, according to the new report. The critters can carry infectious diseases such as Lyme, and tend to live in wooded, shrubby or grassy areas, even in urban playgrounds. Poison ivy is also proliferating and growing more toxic with the climate's rising carbon dioxide levels. The plant currently thrives in all of the lower 48 states, with the exception of California. Even jellyfish, algae blooms,
fire ants and stink bugs, the researchers write, may continue to pose bigger problems for people wanting to enjoy a local city park or extended stay in the wilderness.

"There are many, many ways climate change is affecting us," Doug Inkley, a biologist with the National Wildlife Federation, told The Huffington Post. "This is another one, and yet another reason we need to reduce our industrial carbon pollution."

O'Mara referred to the escalating numbers of ticks, mosquitoes and other pests he's faced himself while taking his own young daughter out to hike, canoe and bird-watch. These often-overlooked symptoms of climate change, he said, "make people not want to go out quite as much or enjoy it for quite as long."

Experts also agree, however, that the benefits of time in nature still far outweigh the risks.

"As families and societies consider the risks of being outdoors, they also have to consider the risks of not exposing their children to nature," said Dr. Pooja Tandon, a pediatrician at Seattle Children's Hospital, who noted that the new report opened her eyes to climate change's more subtle effects on our health. "Those are quite real risks."

Tandon points to research that continues to underscore the wide array of benefits brought by spending time outdoors -- from more physical activity and sounder sleep to greater mental clarity and lower stress levels. Researchers have found that a walk in the park may alleviate symptoms of attention deficit hyperactivity disorder to the same degree as a dose of Ritalin, and far more so than a walk in the city or a neighborhood. Perhaps more surprising are the links researchers are making between nature time and improved eyesight and bone density.

Overall, getting children outdoors is critical to tackling the epidemic of chronic diseases, said Zarr, and we'd be remiss to let pests thwart that effort.

Zarr noted that there are many steps people can take to minimize their risks in the outdoors. The National Wildlife Federation offers suggestions for protection from pests, including wearing insect repellent, checking for ticks and keeping outdoor areas clean and free of discarded food. Local hazards might also be added to maps and ratings of parks. Each of the 384 parks Zarr prescribes for his D.C. patients is currently rated in terms of safety, level of activity, cleanliness and accessibility and is hyperlinked to electronic medical records.

Addressing the underlying issue, climate change itself, is also among the goals of Zarr's program. He hopes to help create a new generation of environmentally conscious people.