The need to address climate change and reduce global greenhouse gas (GHG) emissions is one of the most prominent international policy issues of the last two decades. Governments around the world have legislated in an attempt to address this challenge, and many of these legislative measures have come at a huge cost. And yet global GHG emissions, particularly carbon dioxide emissions, have continued to rise at a rapid pace, increasing by c. 32 percent between 1990 and 2010 according to UNEP. This is despite a globally agreed challenge to reduce emissions by 40 percent by 2050 from 1990 levels as part of the UN Climate Change Convention. Even some countries that are the most active pursuers of lower emissions have lost the gains of recent years, as flaws in their current energy policies emerge. 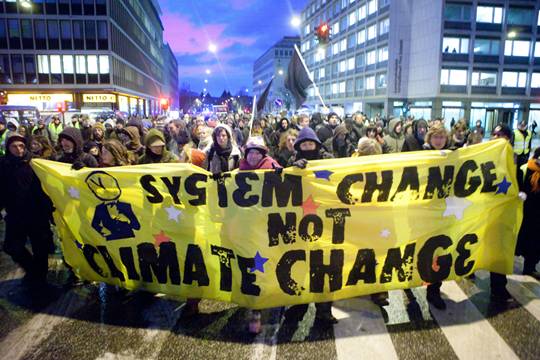 Existing government energy and emissions policies are often based on misconceptions that lead to ineffective or even counterproductive outcomes. The contradictions in policy belie the poverty of analysis and overabundance of ideology that have gone into crafting them.

Numerous government policies insinuate that replacing fossil fuels with alternative energy sources as soon as possible is the best, and indeed only, sustainable way to reduce greenhouse gas emissions and combat climate change. In the European Union, this mind-set manifested itself in the 20 percent renewables target by 2020, a legally binding goal for EU member states to collectively meet. This apparent dogma on the generation of renewable capacity has resulted in the neglect of other, often more cost effective and immediate, emission reduction measures.

The results of these skewed policies are evident in declining investment trends in new renewable technology: According to UNEP's Global Trends in Renewables Energy Investment report released earlier this year, less than 5 percent of the $244 billion spent on renewables investment globally in 2012 was for research and development (R&D), jeopardising the development of better clean energy technologies essential to meet overall energy and environmental goals. The IEA estimates that global clean energy R&D investment needs to be more than four times higher than it currently is in order to meet our long-term targets, and yet big governments like the U.S. are looking to cut back on energy research funding as they pursue budgetary austerity.

Energy efficiency measures, including research into new building, appliance and urban planning technologies, are also given far less priority and funding than they deserve, despite their considerable potential to reduce emissions and revolutionize energy use. The IEA estimated in their World Energy Outlook 2012 that a global investment of $11.8 trillion in energy efficiency measures to 2035 could provide savings of $18 trillion over the same period -- a huge potential economic incentive.

Similarly, efforts to reduce non-energy GHG emissions are often side-lined because they do not fit into the narrative of an alternative energy future. Emissions caused by agriculture, hydro fluorocarbons, cement, and deforestation are collectively responsible for approximately one-third of global net annual GHG emissions. Deforestation alone is a larger source of GHG emissions than global transport, yet despite the considerable social and environmental harm caused we have witnessed a consistent annual loss of 13 million hectares of forests throughout the 2000s.

Fossil Fuels: The Good, the Bad and the Ugly

Fossil fuels currently account for over 80 percent of global primary energy provision. A blanket dismissal of 'fossil fuels' makes it anathema to consider the continued central role that they will have to play in satisfying the IEA's estimated primary energy demand growth of c. 22 percent over the next two decades.

However the mix between fossil fuels will matter a great deal to global GHG emissions and wider environmental conditions. Aside from health and environmental benefits, the global potential for emission savings of switching from coal to natural gas, which emits 50 percent to 60 percent less GHG emissions per unit of power generated, are huge; some 17 percent of all global GHG emissions today could be cut by this measure alone, which is more than the USA emits in its entirety. Further gains could be possible in the longer term if gas substitutes for oil in the transport sector, which today accounts for 13 percent of global GHG emissions. With 56 years of global proved reserves at current demand levels and a further c. 200 years of estimated remaining supplies, according to the IEA, natural gas has the ability to supply the world's energy needs at scale for many years to come.

The counterproductive nature of a narrowly focussed approach to renewables and the fossil fuel mix is most evident in Germany. Germany has devoted substantial political resources and spent over $100 billion on renewables capacity cumulatively so far. The result has been a substantial increase in renewables generation (excluding hydroelectric), which accounted for 8.3 percent of Germany primary energy demand in 2012, the highest share for any large economy. And yet German CO2 emissions rose by 1.3 percent between 2011 and 2012, despite renewables output growing 8.5 percent over the same period. This is as a result of cheap coal and lignite being allowed to regain market share, with new-build renewables capacity displacing natural gas in the power sector; a very expensive way to achieve no net emissions savings! With Germany's planned nuclear phase out, cuts to renewables subsidies, and over 6 gigawatts of new coal plants newly built or under construction as of the end of 2012, Germany's emissions are expected to continue to rise in years to come.

Meanwhile, the USA, a country with relatively little political enthusiasm for climate change policy, having not even ratified the Kyoto Protocol, has achieved substantial GHG emissions reductions in the past five years. New domestic gas supplies have pushed gas prices down to levels at which they can undercut domestic coal production. By increasing the share of gas-fired power from around 20 percent to 30 percent of the generation mix in only four years, the USA has reduced energy related CO2 emissions by 8.6 percent between 2008 and 2012 to levels last seen in the mid-1990s. When looking to the world's emerging economies such as India and China, where coal accounts for 53 percent and 68 percent of primary energy demand respectively, promoting a switch from coal to gas is likely to offer the highest economic and emissions savings impact.

In parts of the Middle East, a region with the highest energy use per capita in the world, the answer to a rapid rise in energy demand and GHG emissions has been to push for more solar power developments, alongside new nuclear capacity. Whilst energy supply diversification makes sense for security of supply reasons, this must not come at the expense of other viable options to achieve large-scale emissions reductions. Above all, reforming energy subsides, which cost close to $240 billion in 2011 (or 22 percent of all government revenue) and accounts for about one-half of global energy subsidies, will have the greatest positive impact on energy demand and supply management, in turn curbing emissions. Energy subsidy reforms are also likely to unleash more domestic gas supplies which would previously have been uneconomic to produce, opening up the option for the region to pursue more gas use in transportation, a double win: cutting GHG emissions and reducing domestic oil demand to allow for increased valuable oil exports.

The scope for energy efficiency gains in the region are also likely to be huge, as there has been little historical economic incentive to pursue energy-efficient buildings, transport and industry. In some countries, initiatives are currently being designed and implemented to reduce the demand for electricity and water. Earlier this month in the UAE, the Dubai Electricity and Water Authority started implementation of its Green Economy for Sustainable Development initiative to raise awareness of responsible energy consumption in line with the Dubai Integrated Energy Strategy 2030, which aims to reduce demand for energy in the Emirate by 30 percent in 2030. In the UAE's capital, Abu Dhabi, The Executive Affairs Authority is developing a Comprehensive Cooling Plan to reduce the projected energy consumption in buildings between now and 2025, targeting a reduction of over 10 million tons of CO2 emissions.

Another area where the Region has already taken a positive lead is in accepting the need for more investment in research and development of new technologies to deliver better renewables and greater energy efficiency. In particular, The Masdar Institute based in Abu Dhabi has established a global benchmark for developing new techniques for environmentally responsible energy use and urban living. If initiatives such as Masdar can be combined with energy sector subsidy reforms, the Region could well set an environmental example for other regions of the world to follow at the same time as making its own energy system more robust and economically productive.

While the circumstances of each country and region can vary widely, the essential guiding principles for pursuing energy and GHG emissions reduction policies are the same. Only by considering all options can these major global challenges be overcome. These options must be evaluated and re-evaluated on a consistent basis for their likely emissions impact, local environmental impact, full lifecycle financial cost, practical feasibility of rollout, and scalability. Those which are most promising -- the low-hanging fruit -- should be prioritized. At the same time, research and development must be actively pursued to ensure that more economically feasible options are available in future. How else can we devise and implement coherent policies that safeguard sustainable energy for our rapidly growing global population, which is on its way to exceed 10 billion by 2050?