If you think your doctor is hard to understand, try talking to a climate scientist.

In late 2014, the World Bank published a remarkable document that should have shaken the international business world. Titled "Turn Down the Heat: Confronting the New Climate Normal", it drew on 1,300 publications to explore the impacts of a world four degrees centigrade warmer - the world our grandchildren seem likely to inherit before the end of this century.

Authored by climate scientists of the Potsdam Institute for Climate Impact Research, the report's three hundred plus pages are densely written and often hard for non-experts to understand. However, some passages about the impact of a 4°C temperature rise are crystal clear. Here a section on North Africa:

"There is a considerable likelihood of warming reaching 4°C above pre-industrial levels within this century... Crop yields are expected to decline by 30 percent with 1.5-2°C warming and up to 60 percent with 3-4°C warming... Large fractions of currently marginal rain-fed cropland are expected to be abandoned or transformed into grazing land; current grazing land, meanwhile, may become unsuitable for any agricultural activity..."

One sentence really caught my attention: "In a 4°C world, mean summer temperatures are expected to be up to 8°C warmer in parts of Algeria, Saudi Arabia and Iraq..." If summer mean temperatures are set to rise by more eight degrees in this already scorching region, I wondered, what about maximum temperatures? According to the study: 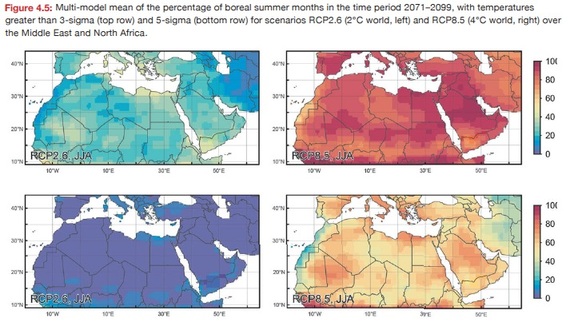 As I've got no idea what that actually means, I jumped at the chance to talk with climate scientist Christopher Reyer, one of the co-authors of the study, on the edge of a public event organized by the World Bank in Morocco last week.

So, I asked, what kind of maximum summer temperatures do people in Morocco's fabled desert city of Marrakech face in a +4°C world? "That's very hard to answer," he told me, "but the distribution curve will shift towards the extreme ends."

Well, yes, but considering that the average summer maximum there is already 38 degrees, and the local record maximum to date is a sizzling 47 degrees Centigrade [116 degrees Fahrenheit], what kind of heat are we looking at? Reyer told me that he'd looked over that question with his team back in Germany - I'd emailed it to him beforehand - and basically couldn't answer it without some complicated calculations taking into account the exact shape of the city's current temperature curve.

Exasperated, I dug further. What does '5-sigma' mean? "It's quite clear that temperatures will be warmer," Reyer said. By way of comparison, he explained, the 2003 heat wave in Europe [in which an estimated 70,000 people died during a 2.3°C hotter-than-usual summer], was only a 3-sigma event.

So, would it be possible to survive a 5-sigma event outdoors in Marrakech? "That depends how you define 'survive'," answered the climate wonk, adding that it would probably be survivable if you kept to the shade and didn't move. However, any kind of human activity would be impossible in that kind of temperature.

To wrap up the interview, I asked Christopher Reyer how much hotter he thought the planet would be by the year 2100. "I'm not sure," he replied, "I'm not an expert on the policy side." I persisted, asking him not for an official projection, just for his best personal guess, a single number. He visibly relaxed.

"I guess it should be between three and four degrees hotter. We used to think that we were headed for +8°C, but that will never happen. We are not even on track for +6°C because economies will be collapsing long before we get there. We know that after +2°C, dangerous things start happening, and we start passing crucial tipping points, like the West Antarctica ice sheet collapse, which has reportedly already begun."

What will a two degrees warmer world, which we seem likely to inhabit by 2050, look like?

"Two degrees is not a picnic either. Imagine events like the 2003 European heat wave, the 2010 Russian heat wave which had repercussions on the global wheat market, and Hurricane Katrina, all of them happening simultaneously everywhere in the world."

Oh, so that's what the climate scientist was trying to say all along: We face an avalanche of global disasters during our lifetime, and unless we slam the brakes on carbon pollution fast, the global economy will collapse to boot.

And, be warned, there will be 5-sigma heat events too.

Disclaimer: This blog was written in a private capacity, and exclusively reflects the author's own personal views. Neither the World Bank nor the Potsdam Institute reviewed, let alone endorsed, this post prior to publication.