For more than 20 years I've been an educator and an activist in the religious environment movement -- both Jewish and interfaith. In a typical Q&A after a presentation, I'm often asked why I am motivated as a rabbi to speak out on the environment. I've reflected on this question for many years and have been able to trace my path to religious environmentalism to my earliest spiritual encounters in the natural world and through my theological and intellectual development that began while I was in rabbinical school.

But the most important influence on my decision to become part of this movement comes from the fact that I'm a parent. I learned about climate change from the scientists, and as the parent of two little girls (twins, now 32 years old), I worried about the world that they and their children would live in. I assumed I would not live to see the most severe consequences of climate change, but they would.

Now, they have both grown up, and I have grandchildren. Now, I'm even more concerned. I grew up in a middle class suburb of Toronto. My family never lacked for food, clothing and other necessities. My parents sent me to summer camp in Northern Ontario, where I was able to spiritually encounter Creation on many canoe trips. I never thought that my descendants might not enjoy the same kind of life that I had. Now I do, and the immediate concern with my children and grandchildren's future has brought home to me the moral issue of climate change into a more immediate way.

Climate change is moral issue. We must say this loudly and continually. I believe, as do many others in the religious environment movement, that this declaration has been missing in the debates over climate change policy. We have heard about economics and ecosystems and threats to our lifestyle, but not whether it is immoral for a society to prosper without concern about how their actions are negatively impacting the lives of others.

Part of the reason people don't see climate change in terms of morality is that it is not close to them in both time and space. Climate change is occurring gradually and its greatest impact will be in the future. We have trouble seeing how our actions will affect the future beyond our own lifespan. And the people who are already being affected are generally not people we know. They are an abstraction for whom it is difficult to be empathetic. But empathy is a key prerequisite for ethical action. That is why looking at my daughters and grandchildren motivates me to speak and to act. Just because we live in one of the wealthiest and most powerful countries in the world does not guarantee that somehow they will be able to avoid the impact of climate change.

I began to better understand my wider responsibility several years ago when I was on a panel discussion at a conference at the United Nations on the moral implications of climate change. I was the religious voice on the panel. One of the other participants was the former U.N. ambassador from the South Pacific island nation of Tuvalu. I had never heard of Tuvalu, but I quickly learned that all its inhabitants, because of rising sea waters due to climate change, were making plans to leave and move to Australia. Within 20 years, Tuvalu will disappear, the first state in human history to cease to exist because of climate change. There are 10,000 people on Tuvalu and people have lived there for 3,000 years. Did the Tuvalese cause the climate change that will destroy their homeland and ancient culture? Who is responsible? I am. We are. As Rabbi Abraham Joshua Heschel once said, "Above all, the prophets remind us of the moral state of a people: Few are guilty, but all are responsible."

Here is a great rabbinic midrash from around the second century C.E. on collective responsibility:

Rabbi Shimon bar Yohai taught: It is to be compared to people who were in a boat, and one of them took a drill and began to drill a hole beneath him. His companions say, "Why are you doing this?" He replied: "What concern is it of yours? Am I not drilling under myself?" They replied: "But you will flood the boat for us all!"

Recently, this midrash made me think about a monumental sculpture called "The Spirit of Haida Gwaii," which was created by the late Canadian Haida artist Bill Reid. (The Haida are a Pacific Northwest native tribe that lives in British Columbia.) It shows a traditional Haida cedar dugout canoe which carries 12 human and animal passengers representing the various animals and people of Haida mythology. This work is symbolic of the variety and interdependence of the natural environment of the Haida's homeland. 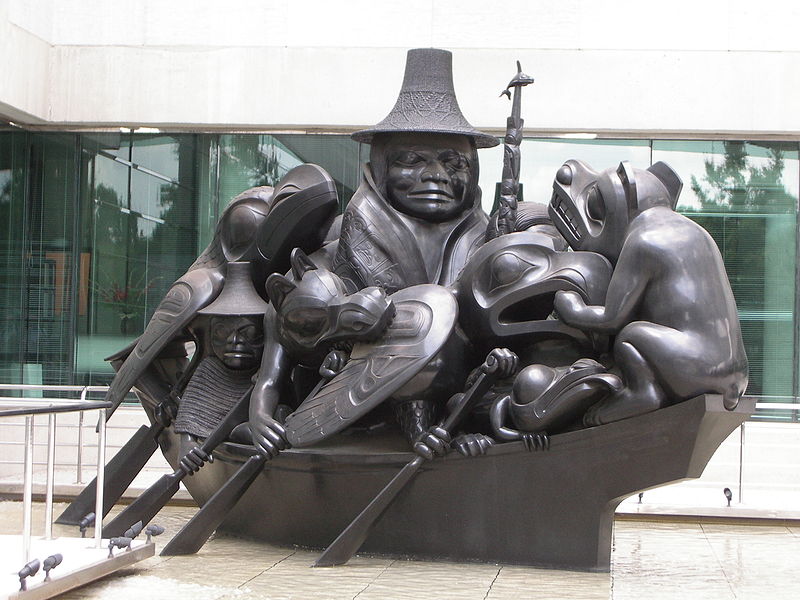 This copy of 'The Spirit of Haida Gwaii,' is found outside the Canadian embassy in Washington.