"Climate change is a really bad reason to get divorced."

Katharine Hayhoe, a leading climate scientist, recalled the trial she and her husband Andrew, an evangelical Christian pastor, faced when they discovered they weren't on the same page about global warming.

After a number of intense discussions, mediated by shared values and beliefs, their marriage persevered. Andrew accepted the overwhelming scientific evidence, and they even went on to co-write a book for Christians on climate change. But in evangelical churches across the U.S., a faith community to which Hayhoe herself belongs, many pastors and parishioners continue to perceive an incompatibility between their faith and the climate science.

This kind of dissonance is unnecessary, according to Hayhoe, and an unhealthy roadblock to much-needed action.

"The [climate change] issue is not inconsistent with Christian values," Hayhoe, director of the Climate Science Center at Texas Tech University, told The Huffington Post. "In fact, Christian values demand we take action. Climate change disproportionately affects the poor and vulnerable -- the very people Christians are called to care for and love."

That the poor bear the brunt of global warming's effects, from food insecurity to waterborne diseases, is one of the key takeaways from the United Nation's latest Intergovernmental Panel on Climate Change (IPCC) report, released this week. The same theme emerges in a new Showtime series, "Years of Living Dangerously," set to premiere April 13. Co-produced by James Cameron and starring celebrities including Harrison Ford and Matt Damon, the documentary addresses the entanglement of politics, faith and science that impedes acceptance and action on climate change.

Hayhoe is a prominent figure in the first episode.

Evangelicals, who currently represent about a quarter of the U.S. population and wield significant political clout, aren't necessarily worried about the Earth itself, noted Rev. Mitchell Hescox, president of the Evangelical Environmental Network, a ministry dedicated to caring for the natural world.

But a growing number, himself among them, "realize the overwhelming impacts of climate change on human life, both here and around the world," said Hescox, who worked for 14 years in the coal industry and 18 years as an evangelical pastor before taking the helm of the EEN.

"It affects all the social concerns of the church -- poverty, immigration, and the list goes on," he said. "What the IPCC report really helped to highlight is that this is a people problem, not an Earth problem."

The environmental movement among evangelical Christians -- also known as "creation care" -- isn't new. Dedicated leaders such as Rev. Richard Cizik have been working to engage fellow evangelicals for more than a decade. And despite resistance from colleagues, they've made progress. In a study published last year, researchers found that about half of evangelicals now believe climate change is happening and that we should adopt policies to reduce it. The majority of evangelicals surveyed, however, did not think human activity is to blame.

"Within the community, there are still some stark differences of opinion," said Anthony Leiserowitz, director of the Yale Project on Climate Change Communication and an author of the study. "A lot of that falls on political grounds."

Leiserowitz called the relationship between evangelicals and right-wing politicians "symbiotic."

"If all of a sudden, Mitch McConnell, Speaker [John] Boehner, Rush Limbaugh and 'Papa' [Bill] O'Reilly all started to say, 'You know what? We've been wrong all these years about climate change,' then that would dramatically change the conversation," he said. "At the same time, most of those folks are going to respond to what their constituents and key influencers are telling them."

"No doubt, evangelicals are still a powerful force within the Republican Party," added Leiserowitz.

Rev. Hescox, too, underscored the need to uncouple science from politics in order to move forward on the issue. Other evangelicals echoed the call.

"A thermometer is not Republican. A thermometer is not a Democrat," Andrew Farley, an associate professor of applied linguistics at Texas Tech, tells Don Cheadle, a celebrity correspondent, during the first episode of "Years of Living Dangerously." (The show will also be available online April 7.) 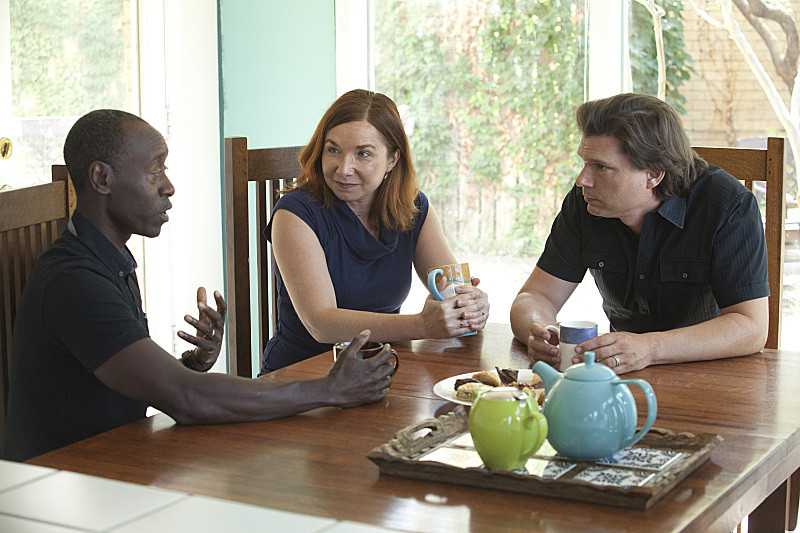 Farley, of course, is Hayhoe's husband -- her first climate change convert. She sits next to him during the conversation with Cheadle in their Lubbock, Texas, home. Later in the show, Hayhoe travels to Plainview, Texas, one town over, where she gives a talk to residents on climate change's role in the devastating drought of 2013. About 10 percent of the area's workforce lost their jobs when the heat and lack of rain drove the Cargill meat plant to shut down. The popular view in the small town was that the drought was God's will, or part of a natural cycle.

Cheadle interviews a cattle rancher in town before Hayhoe's visit. "There's only one man who knows how much rain we're gonna get," the rancher said. "That's God, and he's not a scientist."

One of the roadblocks to climate change becoming a nonpartisan issue, and to opening up more ears to the science, according to Hayhoe, is the evangelical community's lack of strong hierarchical leadership. There are influential people like Cizik, but unlike with other faith traditions, there is no pope, archbishop or other central figure that everyone can look to.

"We have this leadership vacuum that I think has been filled with conservatives who aren't necessarily Christian. People get their opinions from AM talk radio, or from Fox News," Hayhoe told HuffPost.

"This is also a generational issue. If you talk to the average 20- or 30-year-old, you might get a very different perspective," she added. 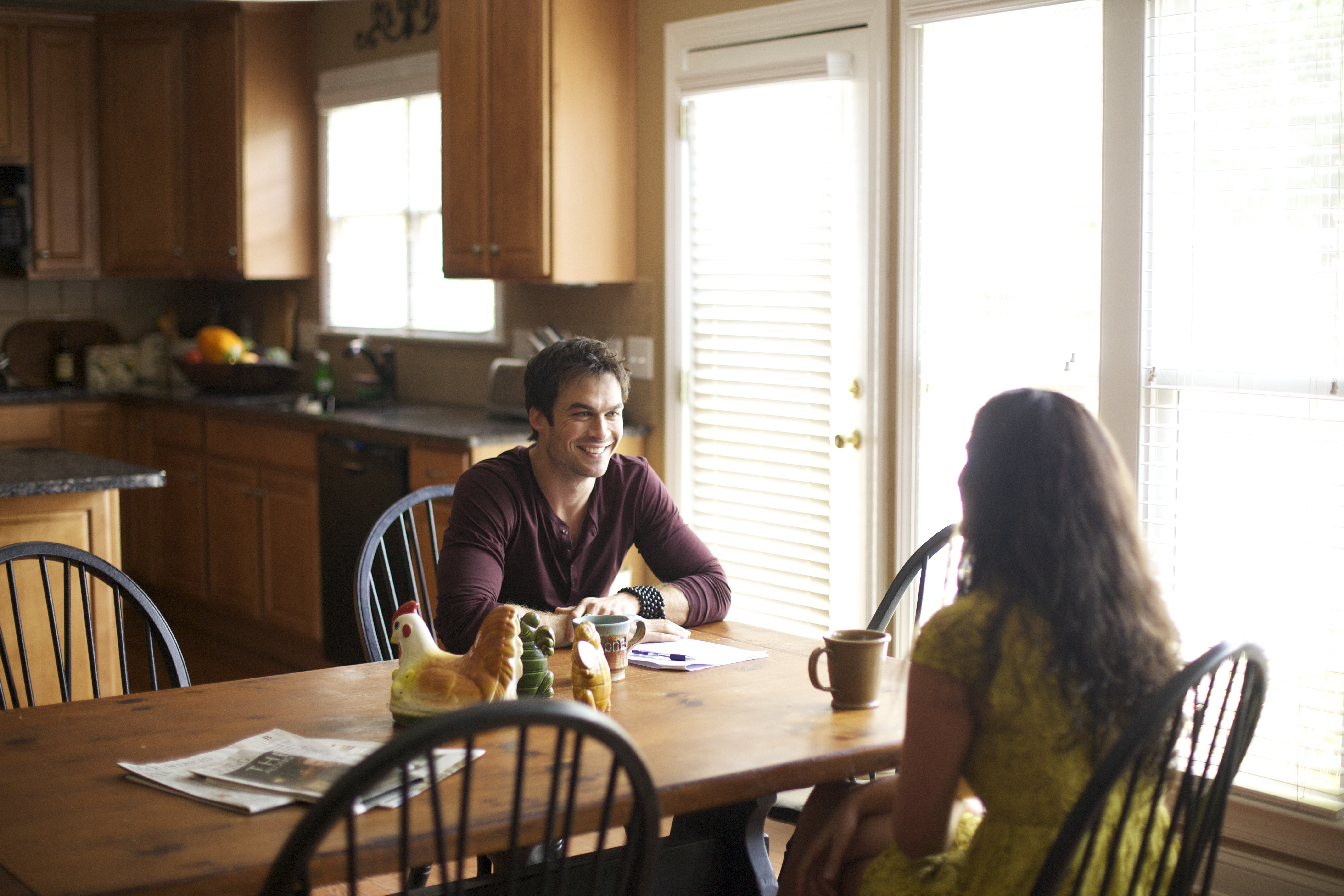 "Growing up, the focus of the conversation was always on sin and salvation and the afterlife," recalled Anna Jane, 29, of her upbringing. "There wasn't a big emphasis on our experience in this life and this world, other than what you shouldn't do."

During college, much to Rick's initial chagrin, Anna Jane became an environmental activist.

The fourth episode of "Years of Living Dangerously" profiles Anna Jane's attempt to convince her father that climate change is real. He had already followed his daughter's lead on some environmental issues, such as pollution. While Anna Jane said she couldn't yet disclose to HuffPost where her father landed on climate change at the end of the show, she offered one hint: "I underestimated the power of ideology when we're talking about this issue, for sure."

This week, more than 20 Christian colleges across the country hosted climate change events in response to the IPCC report, including a nationwide "Day of Prayer and Action" on Thursday. Ben Lowe, national spokesman for the event's organizer, Young Evangelicals for Climate Action, suggested there are many reasons he and his peers are embracing the issue.

"I consider myself pro-life," he said. "I see this as an issue affecting lives and health of people all around world."

Recent work by Leiserowitz and his colleagues identified two key messages from the Bible that appear to compel evangelists to take up the issue. In the Old Testament, God calls on people to be stewards of his creation. In the New Testament, Jesus commands people to care for "the least of these" -- the poor, the sick, the elderly, the powerless.

"Many of these churches invest millions of dollars, and their young people often go abroad, to try to help people who are in dire straits of poverty, disease," said Leiserowitz. "So they say, 'How could we in good conscience ignore a problem that is going to push millions more people into those exact same circumstances?'"

Hescox and Lowe noted that their organizations led a trip to Malawi last May for evangelical leaders and youth to witness firsthand the effects of climate change on the poor.

As people across America have seen and experienced in recent years, climate-related problems are escalating in the U.S., too. Hayhoe is an author of the U.S. National Climate Assessment, due out at the end of April, which will document the impact on Americans' health and livelihoods of climate events like intense storms, extreme heat and more frequent wildfires.

"When I look at the information we get from the planet, I look at it as God's creation speaking to us," Hayhoe told residents of Plainview during her visit. "And in this case, there's no question that God's creation is telling us that it's running a fever."

The message resonated with people in the audience. "You know, when you have somebody who believes the same way as you," one man told Cheadle, "when you see that conservative side telling you the message -- it sure makes a lot of difference."