Nature doesn't like to be rushed. But to keep up with climate change, many animals will need to evolve 10,000 times faster than they have in the past, a new study suggests.

Manmade climate change — fueled by excess greenhouse gases in the atmosphere, namely carbon dioxide — is expected to raise global temperatures by up to 10.8 degrees Fahrenheit (6 Celsius) within the next 100 years. That will transform many ecosystems in just a few generations, forcing wildlife to either evolve quickly or risk extinction.

Published online in the journal Ecology Letters, the study concludes that most land-based vertebrate species evolve too slowly to adjust to the dramatically warmer climate expected by 2100. If they can't make high-speed adaptations or move to a new ecosystem, many terrestrial animal species will cease to exist, the researchers report.

"Every species has a climatic niche which is the set of temperature and precipitation conditions in the area where it lives and where it can survive," co-author and University of Arizona ecologist John Wiens says in a press release. "We found that on average, species usually adapt to different climatic conditions at a rate of only about 1 degree Celsius per million years. But if global temperatures are going to rise by about 4 degrees over the next hundred years, as predicted by the Intergovernmental Panel of Climate Change, that is where you get a huge difference in rates. What that suggests overall is that simply evolving to match these conditions may not be an option for many species." 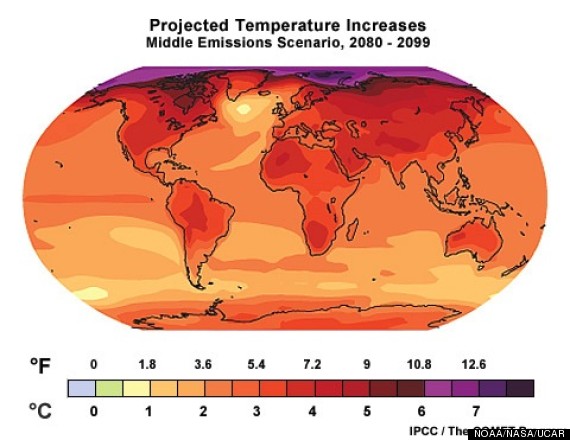 Along with Ignacio Quintero of Yale University, Wiens based this study on an analysis of phylogenies, or evolutionary family trees that show how species are related and how long ago they split from a shared ancestor. Wiens and Quintero studied 17 animal families representing the major extant groups of land vertebrates — including mammals, birds, snakes, lizards, salamanders and frogs — and then combined these phylogenies with data about each species' climatic niche, revealing how quickly such niches evolve.

"Basically, we figured out how much species changed in their climatic niche on a given branch, and if we know how old a species is, we can estimate how quickly the climatic niche changes over time," Wiens explains. "For most sister species, we found that they evolved to live in habitats with an average temperature difference of only about 1 or 2 degrees Celsius over the course of one to a few million years."

"We then compared the rates of change over time in the past to projections for what climatic conditions are going to be like in 2100, and looked at how different these rates are," he adds. "If the rates were similar, it would suggest there is a potential for species to evolve quickly enough to be able to survive, but in most cases, we found those rates to be different by about 10,000-fold or more. According to our data, almost all groups have at least some species that are potentially endangered, particularly tropical species."

Some animals will likely be able to survive without evolutionary changes, the researchers point out, either by adopting new behaviors or by chasing their favorite climate across the landscape. Those strategies will only work in limited circumstances, though — species will need fallback food sources, for example, and flexible habitat options.

"Some studies suggest many species won't be able to move fast enough," Wiens says. "Also, moving may require unimpeded access to habitats that have not been heavily disturbed by humans. Or consider a species living on the top of a mountain. If it gets too warm or dry up there, they can't go anywhere."