As officials begin the arduous task of pumping corrosive seawater out of New York City’s subway system and try to restore power to lower Manhattan, and residents of the New Jersey Shore begin to take stock of the destruction, experts and political leaders are asking what Hurricane Sandy had to do with climate change. After all, the storm struck a region that has been hit hard by several rare extreme weather events in recent years, from Hurricane Irene to “Snowtober.”

Scientists cannot yet answer the specific question of whether climate change made Hurricane Sandy more likely to occur, since such studies, known as detection and attribution research, take many months to complete. What is already clear, however, is that climate change very likely made Sandy’s impacts worse than they otherwise would have been.

There are three different ways climate change might have influenced Sandy: through the effects of sea level rise; through abnormally warm sea surface temperatures; and possibly through an unusual weather pattern that some scientists think bore the fingerprint of rapidly disappearing Arctic sea ice.

If this were a criminal case, detectives would be treating global warming as a likely accomplice in the crime.

Water temperatures off the East Coast were unusually warm this summer — so much so that New England fisheries officials observed significant shifts northward in cold water fish such as cod. Sea surface temperatures off the Carolinas and Mid-Atlantic remained warm into the fall, offering an ideal energy source for Hurricane Sandy as it moved northward from the Caribbean. Typically, hurricanes cannot survive so far north during late October, since they require waters in the mid to upper 80s Fahrenheit to thrive.

Scientists said about 1°F out of the 5°F East Coast water temperature anomaly may have been due to manmade global warming. Warmer seas provide more water vapor for storms to tap into; this water vapor can later be wrung out as heavy rainfall, resulting in flooding.

The most damaging aspect of the storm was the massive storm surge that struck the coastline from Massachusetts to Maryland. Global warming-related sea level rise gave the surge a higher launching pad than it would have had a century ago, making it more damaging than it otherwise would have been. This is only going to get worse as sea level rise continues as a result of warming ocean waters and melting polar ice caps and glaciers.

The storm surge at The Battery in Lower Manhattan was the highest ever recorded at that location. It surpassed even the most pessimistic forecasts, with the maximum water level reaching 13.88 feet above the average of the daily lowest low tide of the month, known as Mean Lower Low Water, including a storm surge component of 9.23 feet. That broke the official record of 10.5 feet above Mean Lower Low Water set in 1960 during Hurricane Donna, as well as a record set during a hurricane in 1821. 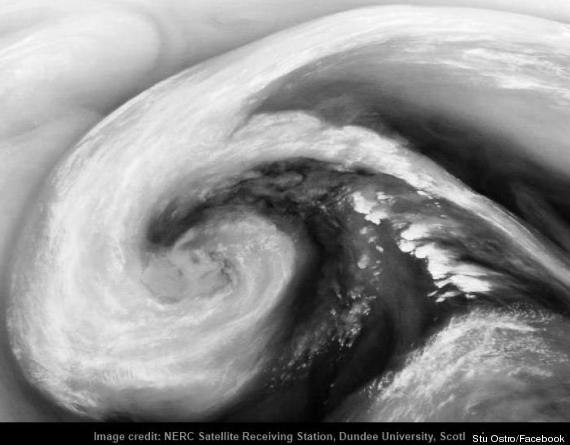 Or, to put it in simpler terms, the water level reached 9.15 feet above the average high tide line.

Katharine Hayhoe, a climate researcher at Texas Tech University in Lubbock, said manmade climate change likely contributed to the storm surge at The Battery in Lower Manhattan, with 1 foot 3 inches of long-term sea level rise recorded at that location, the result of manmade sea level rise, sinking land, and ocean currents. She said the manmade contribution to the storm surge may have been a small amount.

But to the Metropolitan Transit Authority or Con Ed, the main electric utility in Manhattan, each inch of sea level rise matters a great deal.

If a similar storm were to strike New York in 2050, it would cause even more damage, since sea levels are expected to be considerably higher by midcentury. In fact, a recent study found that sea level rise has taken place at an accelerated rate at locations north of Norfolk, Va., and if this pace continues the Northeast could see much higher sea levels than other parts of the East Coast by midcentury.

By warming the seas and the atmosphere, global warming is also expected to alter hurricane frequency and strength, making North Atlantic hurricanes slightly more powerful, while reducing the overall number of storms during coming decades. Detecting such changes in the observational record is difficult, considering the varying ways people have kept tabs on hurricanes prior to the era of hurricane hunter aircraft flights and satellite imagery? A recent study published in the Proceedings of the National Academy of Sciences found that warmer sea surface temperatures are tied to an increase in stronger Atlantic hurricanes.

In addition, an unusual weather pattern in the northern hemisphere steered the storm in an unprecedented direction, as it made a dramatic — and for many East Coast residents, catastrophic — left hook right into coastal New Jersey. The east to west movement, which is exactly the opposite of how weather systems normally move in this area, helped maximize the storm surge, since a strong easterly air flow struck the coast at a right angle.

Satellite loop from the University of Wisconsin, showing Hurricane Sandy as it made landfall in New Jersey.

The upper air flow over the Atlantic Ocean was jammed by a powerful area of high pressure near Greenland and a storm system in the Central Atlantic, leaving the storm no escape route away from the U.S. Such patterns are known as “blocking” events, and they have occurred with increasing regularity and intensity in recent years. Blocking patterns have been linked to several noteworthy extreme weather events, such as the deadly 2010 Russian heat wave and Pakistan floods, the 2003 European heat wave, and the March heat wave of 2012 in the U.S.

In this case, the blocking pattern occurred at precisely the wrong time -- when a hurricane was moving out of the Caribbean.

Weather Channel hurricane expert Bryan Norcross wrote about this on Oct. 26. “The freak part is that a hurricane happens to be in the right place in the world to get sucked into this doubled-back channel of air and pulled inland from the coast,” he said. “And the double-freak part is that the upper-level wind, instead of weakening the storm and simply absorbing the moisture — which would be annoying enough — is merging with the tropical system to create a monstrous hybrid vortex. A combination of a hurricane and a nor’easter.”

Some, though not all, scientists think the more frequent blocking events be related to the loss of Arctic sea ice, which is one of the most visible consequences of manmade global warming. The 2012 sea ice melt season, which ended just one month ago, was extreme, with sea ice extent, volume, and other measures all hitting record lows. The loss of sea ice opens large expanses of open water, which then absorbs more of the incoming solar energy and adds heat and moisture to the atmosphere, thereby helping to alter weather patterns. Exactly how sub-Arctic weather patterns are changing as a result, however, is a subject of active research.

Some researchers who warn that climate change is already being felt in extreme weather events, such as Kevin Trenberth of the National Center for Atmospheric Research in Boulder, Colo., are not yet convinced of the Arctic connection. Others, such as Hayhoe, think it is a “plausible theory” that is worth investigating, although she noted there is evidence that Arctic warming may cause more blocking during the winter rather than during the fall.

James Overland, a scientist with the National Oceanic and Atmospheric Administration who recently published a study on how Arctic sea ice loss is altering the weather in the Far North, said it’s not clear whether Hurricane Sandy was just a freak event or a sign of things to come. “What was highly unusual to me was the slowing down of the jet stream that normally turns hurricanes out to sea, allowing Sandy to directly [make] landfall,” he said in an email conversation. Yet, he said it’s important to recognize that there is still a huge role played by randomness, or chaos, in global weather patterns. “Having looked at a lot of weather maps, I don’t think it’s entirely legitimate to make a big possibility for an Arctic connection with Sandy rather than the chaos default,” he said.

And while climate change has undoubtedly altered the background conditions in which all weather systems are born, scientists said that natural variability still plays a very large role, and may have been the dominant factor with Hurricane Sandy.

Martin Hoerling, a researcher at the Earth Systems Research Laboratory, also in Boulder, is a proponent of this view. “Great events, like this meteorological one, can happen with little cause(s). Individually, neither the tropical storm nor the extratropical storm that embraced it, were unusual,” he said via email. “What makes this a rare, perhaps once in a lifetime event, is the fortuity of their timely (“untimely” as far as most are concerned who sit in harms way) intersection.” Randall M. Dole, who is a colleague of Hoerling's at ESRL, noted that the blocking pattern that helped steer Sandy was "highly transient," which suggests to him that it was just "random bad luck" that it coincided with a hurricane along the East Coast.

Regardless of the chain of events that led to this disaster, Hurricane Sandy is almost certain to wind up being one of the top 10 costliest hurricanes on record, and it comes soon after Munich Re, a global insurance giant, warned of increasing natural disaster losses in the U.S., a trend the company said is related to global climate change.

And regardless of unequivocal linkages between this particular storm and manmade climate change, questions related to future human-caused changes — how they will make this type of event more likely and destructive, through a combination of sea level rise, extreme weather trends, and vulnerability of coastal populations and infrastructure, deserve to be asked and may be much easier to answer.