By Michelle Gottlieb and Lucia Sayre

Gottlieb and Sayre co-coordinate the Healthy Food in Health Care Program for Health Care Without Harm. Sayre is the Co-Executive Director of the Bay Area Physicians for Social Responsibility.

Naysayers take heed...those few extra degrees associated with a changing climate, in most cases, may not be the panacea for feeding the world. So says a new report by the Nobel Prize-winning Intergovernmental Panel on Climate Change. The report is not scheduled to be released until March, but was leaked, so we can get a head start on "digesting" this big news. Despite earlier and more optimistic assessments, the scientists concluded that, overall, agriculture will suffer as a result of climate change with increasing droughts, temperature extremes, and increases in pests. Food production could be reduced by as much as two per cent per decade.

What about those areas where a changing climate will be beneficial? Not enough to offset the impacts, says the report. This means a diminished food supply for a growing global population, demanding 14 per cent more each decade to feed a projected 9.6 billion people by 2050. Tropical countries with higher poverty rates and the most vulnerable populations with less ability to adapt to the changing climate will be hit hardest. These low-income countries are also where most of this century's population growth will occur.

Despite these dire predictions, scientists agree that we must continue to implement strategies to curb greenhouse gas emissions to positively impact the future of climate change. In our series on Climate and Health, we have outlined not only the need for the health care sector - hospitals, nurses, physicians etc - to take action to adapt to the health needs of a population living in a changing climate, but also hopeful and creative solutions to mitigate the impact. This may seem unlikely, but hospitals--the poster children for unhealthy food a decade ago--are emerging as champions in purchasing and serving food that is not only healthier for people, but also helping to heal a planet in crisis.

Acknowledging that livestock generate an estimated 18 per cent of global greenhouse gas emissions, hospitals are increasingly enlisting the power of their purchasing dollar in the service of climate solutions by drastically reducing the amount of meat they purchase overall, reducing meat portions while increasing vegetarian options, as well purchasing and promoting local and seasonal foods on the menu. They are reducing food waste, establishing composting programs to divert organic matter from landfills, and decreasing their energy use in the "back of the house" food operations. To date, more than 150 hospitals across the country are committed to Health Care Without Harm's Balanced Menus Challenge, to implement a "Less Meat, Better Meat" carbon footprint reduction strategy.

Health Care Without Harm is inspired by the efforts of the healthcare sector to heal not only their patients, but also an ailing planet. As "anchor institutions" in their communities, hospitals have a responsibility to use their economic and political influence to accelerate the adoption of policies and practices that promote climate and public health. The prognosis for our global food supply is dire, but with each patient tray that comes off the prep-line, hospitals are becoming players in a movement for positive change. 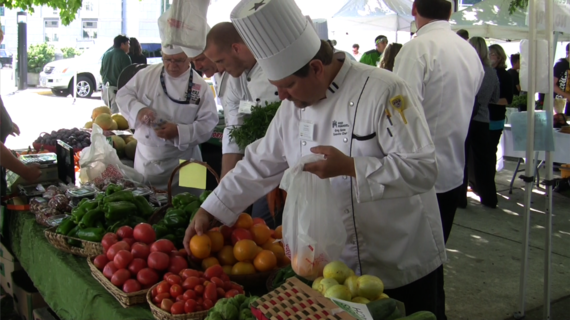