This story first appeared on The Guardian and is reproduced here as part of the Climate Desk collaboration.

Climate change has already left its mark "on all continents and across the oceans", damaging food crops, spreading disease, and melting glaciers, according to the leaked text of a blockbuster UN climate science report due out on Monday.

Government officials and scientists are gathered in Yokohama this week to wrangle over every line of a summary of the report before the final wording is released on Monday – the first update in seven years.

Nearly 500 people must sign off on the exact wording of the summary, including the 66 expert authors, 271 officials from 115 countries, and 57 observers.

But governments have already signed off on the critical finding that climate change is already having an effect, and that even a small amount of warming in the future could lead to "abrupt and irreversible changes", according to documents seen by the Guardian.

"In recent decades, changes in climate have caused impacts on natural and human systems on all continents and across the oceans," the final report from the Intergovernmental Panel on Climate Change will say.

Some parts of the world could soon be at a tipping point. For others, that tipping point has already arrived. "Both warm water coral reef and Arctic ecosystems are already experiencing irreversible regime shifts," the approved version of the report will say.

This will be the second of three reports on the causes, consequences of and solutions to climate change, drawing on researchers from around the world.

The first report, released last September in Stockholm, found humans were the "dominant cause" of climate change, and warned that much of the world's fossil fuel reserves would have to stay in the ground to avoid catastrophic climate change.

This report will, for the first time, look at the effects of climate change as a series of risks – with those risks multiplying as temperatures warm.

The thinking behind the decision was to encourage governments to prepare for the full range of potential consequences under climate change. 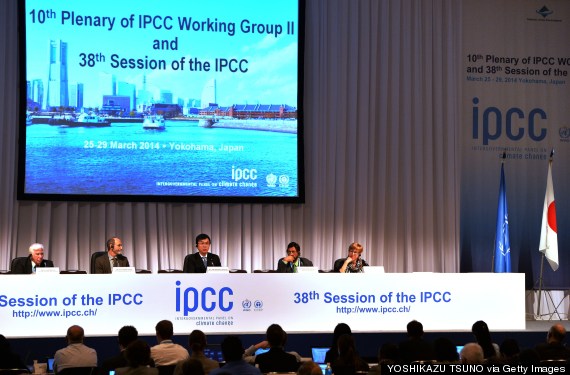 "It's much more about what are the smart things to do then what do we know with absolute certainty," said Chris Field, one of the co-chairs overseeing the report. "If we want to take a smart approach to the future, we need to consider a full range of possible outcomes and that means not only the more likely outcomes, but also outcomes for truly catastrophic impacts, even if those are lower probability," he said.

The gravest of those risks was to people in low-lying coastal areas and on small islands, because of storm surges, coastal flooding and sea-level rise.

But people living in large urban areas would also be at risk from inland flooding that wipes out homes and businesses, water treatment centres and power plants, as well as from extreme heatwaves.

Food production was also at risk, the report said, from drought, flooding, and changing rainfall patterns. Crop yields could decline by 2% a decade over the rest of the century.

Fisheries will also be affected, with ocean chemistry thrown off balance by climate change. Some fish in the tropics could become extinct. Other species, especially in northern latitudes, are on the move.

Drought could put safe drinking water in short supply. Storms could wipe out electricity stations, and damage other infrastructure, the report is expected to say.

Those risks will not be borne equally, according to draft versions of the report circulated before the meeting. The poor, the young and the elderly in all countries will all be more vulnerable to climate risks.

Climate change will slow down economic growth, and create new "poverty traps". Some areas of the world will also be more vulnerable – such as south Asia and south-east Asia.

The biggest potential risk, however, was of a number of those scenarios unfolding at the same time, leading to conflicts and wars, or turning regional problem into a global crisis, said Saleemul Haq, a senior fellow of the International Institute for Environment and Development and one of the authors of the report.

"The really scary impacts are when things start getting together globally," he said. "If you have a crisis in two or three places around the world, suddenly it's not a local crisis. It is a global crisis, and the repercussions of things going bad in several different places are very severe."

There was controversy in the run-up to the report's release when one of the 70 authors of a draft said he had pulled out of the writing team because it was "alarmist" about the threat. Prof Richard Tol, an economist at Sussex University, said he disagreed with some findings of the summary. But British officials branded his assessment of the economic costs of climate change as "deeply misleading".

The report argues that the likelihood and potential consequences of many of these risks could be lowered if ambitious action is taken to reduce the greenhouse gas emissions that cause climate change. It also finds that governments – if they act now – can help protect populations from those risks.

But the report also acknowledges that a certain amount of warming is already locked in, and that in some instances there is no way to escape the effects of climate change.

The 2007 report on the effects of climate change contained an error that damaged the credibility of the UN climate panel, the erroneous claim that Himalayan glaciers could melt away by 2035.

This year's report will be subject to far more rigorous scrutiny, scientists said. It will also benefit from an explosion of scientific research. The number of scientific publications on the impacts of climate change doubled between 2005 and 2010, the report will say.

Researchers said they also hoped to bring a fresh take on the issue. They said they hoped the reframing of the issue as a series of risks would help governments respond more rapidly to climate change.

"Previously the IPCC was accused of being very conservative," said Gary Yohe, professor of economics and environmental studies at Wesleyan University, one of the authors of the report. "This allows them to be less conservative without being open to criticism that they are just trying to scare people to death."

Climate Change Already Felt 'On All Continents And Across The Oceans,' IPCC Finds
Connect The Dots On Climate Change