If Noam Chomsky is right that there's no way the ordinary citizen could possibly understand the threat of climate change by getting their news from mainstream media, no worries. 350.org's revered enviro-guru Bill McKibben makes housecalls. Assuming McKibben gets his point across the way he hopes to, his sold-out barnstorming tour through 21 U.S. cities will come to be regarded as the historic beginning of a divestment campaign like the one that buckled apartheid South Africa. 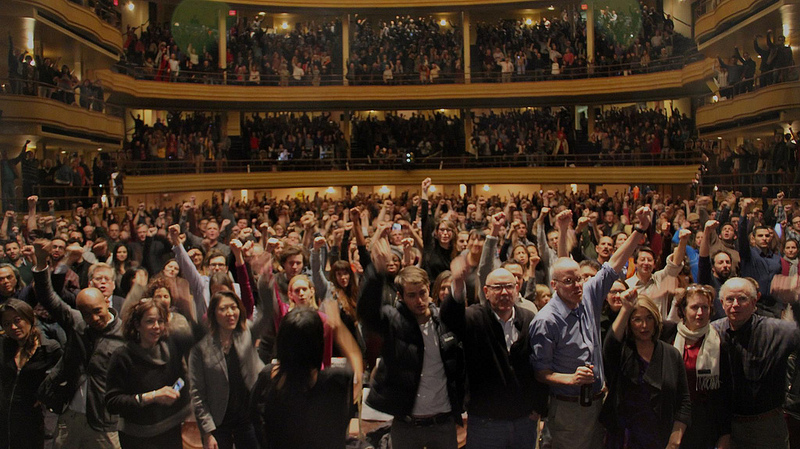 Do the Math New York City

On opening night of his "Do the Math" tour, one day after President Obama's victory speech got its loudest applause at the mention of global warming, McKibben said backstage, "We've got to reduce the power of the fossil fuel industry." Do the Math was designed to "spark the movement that will begin to cut the power of this industry before they raise the temperature of the earth just too high for any of us to deal with."

Writing for the Huffington Post, Tom Zeller lays out the terms of the impending crisis, but he notes that Washington isn't doing much. McKibben blames fossil fuels. "They've been able to block every significant piece of legislation in Washington for decades," he said. "The fossil fuel industry has bought one party, and they've scared the other one."

So local groups like Chicago Area Peace Action (CAPA), host of the Chicago engagement of Do the Math, is poised to carry the torch to its constituency. "The fossil fuel industry and its attendant power elite will not go quietly into the night," said CAPA Board President David Borris. "But a broad-based global social movement that we can and will be a part of has the power to move public policy and lead to a more just and sane energy policy that can sustain us far into the future."

Taking their cues not only from McKibben's acclaimed Rolling Stone article "Global Warming's Terrifying New Math" but also from author/activist Naomi Klein's piece in the Nation "Capitalism vs. the Climate," CAPA members are prepared for a battle to win minds. CAPA's Michael Lynn said he wants to be "a prophet of the social transformation necessary to move from a consumer society to a sustainable one."

But is anybody listening?

Chomsky asserts that as long as the news is framed in such a way that climate-change denialists like Rush Limbaugh and Sarah Palin get equal time with climate scientists, the public is fed an illusion that there's an authentic argument pro and con. Such news-crafting shields people from the vast scientific consensus proving that the course we're on does indeed spell the end of life on earth as we know it.

Nevertheless, HuffPost's Alana Horowitz reported the November 2012 results of a Rasmussen poll finding that 68% of likely voters in the US do believe global warming to be a serious problem. Furthermore, McKibben's focus on student activism using the apartheid model has already proven well placed, as the trustees of Unity College in Maine have voted to divest that school's endowment of all stock in the fossil fuel industry.

South African Archbishop Desmond Tutu would be proud. And he is. He appears on the 350.org site as a boisterous endorser, as do Naomi Klein, Josh Fox and Rev. Lennox Yearwood. Other notables keeping the drumbeat steady are Obama's former specialist on green jobs Van Jones and actor/activist John Cusack who both use Twitter to combat climate skeptics and raise awareness.

"The real first test for the president is going to come when he decides whether or not to approve the Keystone pipeline," McKibben said of the plan to complete a crude oil delivery system between Canada and U.S. destinations from Illinois to Texas. "He put it off for a year, and that year has seen the warmest year in American history. It has seen the catastrophic melt of the Arctic. It's seen epic drought across the Midwest. And it saw a storm so powerful that it flooded our greatest city."

In light of all that, McKibben said he couldn't imagine the president agreeing to "a giant straw stuck into that toxic milkshake up there."