Over 310,000 people marched last Sunday to call for action on climate change. The People's Climate March aimed to press policymakers that would meet two days later at the UN Climate Summit, a preparation for the next Conference of the Parties (COP). Hundreds of thousands showing that despite of political slow action, awareness on climate change has increased in the last years, together with the feeling that it is the biggest crisis of our century. 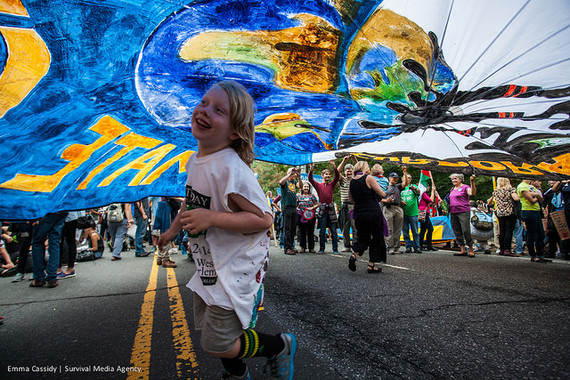 Climate change has increasingly influenced development policies. First of all, because of its consequences, whose impacts can be felt in public health, agriculture, infrastructure, energy and other sectors. But also because mitigation and adaptation to greenhouse gas (GHG) emissions demands changes in the way development is framed in order to create prosperity within planetary boundaries. Although political top down policies are needed for a transition to a low-carbon society, bottom-up behavior change is equally important.

Meat consumption is one good example, among many others, of how individual behavior affects global emissions. The world average of annual meat consumption (excluding other animal products as dairy and eggs) is 38.7 kg per person. This number varies largely from 3.2 kg per capita in India to 125.7 kg per capita in the United States. Emerging countries, like Brazil and China, have been increasing their annual consumption of meat per capita rapidly, with national averages of 80.6 kg and 54.1 kg respectively. Despite of the great impact that meat consumption already has on climate change -- currently accounting for 14.5 percent of human-induced GHG emissions -- international negotiations have overlooked this topic so far.

Expected future increase in meat consumption per capita and population growth will have great impact on natural resources, public health and climate change. If no action is taken to reverse current dietary trends, it is estimated that meat production will almost double by 2050, reaching 455 million tons and increasing the demand for cereals in 50 percent compared to 2005/2007 levels. Moreover, agricultural emissions of CH4 (methane) and N2O (nitrous oxide) are expected to triple by 2055 to 15.3 GtCO2eq/yr (gigatons of carbon dioxide equivalents per year) if current dietary trends and population growth were to continue. This will account for around 75 percent of the 2050 goal for global emissions for the agriculture sector alone (annual emissions of about 20 GtCO2eq/yr), considering the target established to limit the increase in global temperature averages to no more than 2C.

It is certainly very timely to pressure global leaders to take action on climate change, but it is also good to remember the impact that individual behavior have on this process.

The problem, however, is that according to several studies the main factor supporting individual adaptation is one's actual negative experience with climate change. And according to a 2012 AXA study carried out in 13 different countries among over 13,000 people "only" 30 percent of those polled faced a climate change impact in their personal comfort. Since the large majority of people have never suffered a direct impact of climate change it seems that the majority of people will not engage in adaptive behavior change until they suffer one day. This is so even considering that people are well informed. Nine out of 10 polled believe the climate has changed significantly in the past 20 years, and 3 in 4 believe that climate change has been scientifically proven. This also suggests that the sole production and dissemination of information about expected climate change risks and impacts do not significantly affect the motivation to change individual behavior and adapt.

2014 was the first year Gallup included "climate change" in the list of worries tested in its annual March Environment survey. Only 1 in 4 Americans say they worry a great deal. This puts climate change, along with the quality of the environment, near the bottom of a list of 15 issues Americans rated in Gallup's survey. Less than one third of Americans indicated that they worry "a great deal" about the quality of the environment (the lowest level of worry since Gallup began measuring this in 2001). 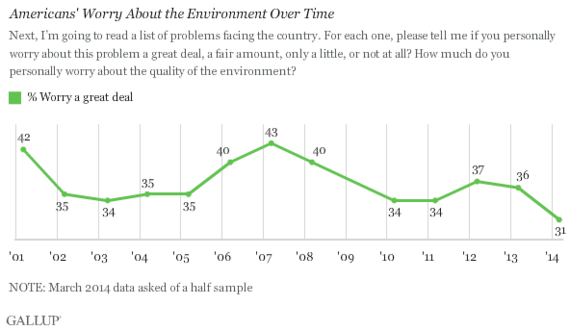 One of the main reasons to explain the traditional American unconcern about environment and climate change is politics. Americans from the two major political parties express different levels of worry about climate change and the environment. Among Democrats, 45 percent say they worry a great deal about the quality of the environment. This percentage drops to 16 percent among Republicans. For climate change there is a 26-percentage-point difference in worry between these two parties.

Given the hindering factors for bottom up individual behavior change and the limitations imposed by politics to most needed top-down regulations we predict that nations, in general, and people, in particular, will be confronted with innumerous new and more severe climate change impacts before a fundamental transformation of how we coordinate efforts to relate with the environment occurs.

Hopefully, initiatives and movements like the People's Climate March will help prove us wrong. In fact, these mediating social structures between the "bottom" and the "top" may become much more effective if used as coordination platforms between the 30 percent who have already suffered direct impact from climate change and the privileged 70 percent who have not (yet!). This will help disseminate perceptions about risk level and increase the likelihood of further individual adaptive change.