On Sunday, hundreds of thousands gathered in New York for one of the biggest marches against climate change. The occasion is the Climate Summit convened by UN Secretary General Ban Ki-moon, the theme of which is "take action." But does that action actually include measures that could do further harm to the planet?

Science has always been clear on the urgency of taking concrete steps to lower greenhouse gas emissions to stay on a path of global warming of less than 2°C, because anything more would have catastrophic consequences and possibly change life as we know it. The UNEP Emissions Gap Report calculates that if the relatively weak voluntary pledges made by countries in Copenhagen in 2009 are implemented without strict rules, emissions could be around 56 gigatons of CO2e by 2020. This would put the world on a path to an increase of 4-8°C during this century.

If we are to stay on a path to a temperature rise of 1.5-2°C, emissions need to be reduced to between 37 and 44 gigatons of CO2e by 2020. This requires real action - not voluntary pledges - and it means legally binding cuts without carbon markets that just shift emissions around. 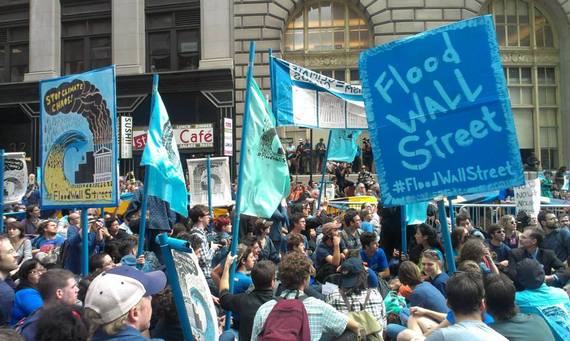 Instead, Ban Ki-moon has organized a big party in New York City, inviting heads of state and heads of transnational corporations, many of which make a lot of money from trading polluting credits in carbon markets and are responsible for increasing greenhouse gas emissions. More specifically, according to the Climate Accountability Institute in Colorado, two thirds of all greenhouse gas emissions come from just 90 oil, gas and coal companies. Of these, 50 were investor-owned oil corporations like Chevron, Exxon, BP and Shell, plus coal producers British Coal, Peabody Energy and BHP Billiton.

The Climate Summit is a big publicity stunt, as it is not even part of the official negotiations under the UN Framework Convention on Climate Change. It is simply a way of giving climate "leaders" a global platform to make beautiful speeches on taking action. Not only that, it promotes market-based and techno-fix actions that will do more harm than good to the planet. These initiatives included REDD (Reducing Emissions from Deforestation and forest Degradation), Climate Smart Agriculture, Blue Carbon and Biodiversity Offsetting. They also include a series of techno-fix solutions promoted by transnationals: geo-engineering, carbon capture and storage, genetically modified organisms, agro-fuels and industrial bio-energy, synthetic biology and nanotechnology, hydraulic fracking, nuclear projects, and waste-to-energy generation based on incineration.

These false solutions are not designed to tackle climate change. Instead, they aim to guarantee continued profits for corporations. Worse yet, they serve to commodify and privatize the functions of nature and destroy the ecosystems - like forests, soil, wetlands, rivers, mangroves and oceans - upon which life on this planet depends.

Meanwhile, more than 330 organizations and social movements representing more than 200 million people have denounced this corporate takeover of the UN climate talks, and they are also on the streets in New York. These movements include La Via Campesina, Oil Watch International, Migrant Rights International, Global Forest Coalition, Indigenous Environment Network, Grassroots Global Justice Alliance, ATTAC France, and many others. Their message is simple: we can't resolve the climate crisis without addressing its root causes.

Although there are no shortcuts to system change, the following is a ten-point plan of action which social movements and their allies are promoting in New York to get us started: make immediate binding commitments to keep the global temperature rise to no more than 1.5°C this century by reducing annual global greenhouse gas emissions to 38 gigatons by 2020; leave more than 80% of fossil fuels under the soil; put a ban on new oil and gas explorations and shift away from resource extraction; accelerate the transition to clean and renewable energy with public and community control; promote the local production and consumption of goods; move from export-oriented agriculture to community-based production based on the principles of food sovereignty; apply zero waste strategies; improve and expand public transportation; create more climate jobs designed to slash greenhouse gas emissions; and dismantle the war and military industry that generates greenhouse gas emissions and divert war budgets to promote genuine peace.

If this new momentum to "take action" is going to have any positive result, our first step should be to halt the corporate takeover of the climate negotiations under the UNFCCC. If we lose this decade, there will be no going back from climate chaos. The time for genuine and meaningful action that does not do more harm to the planet is now.

Pablo Solon is former Bolivian ambassador to the United Nations and now executive director of Focus on the Global South; Josie Riffaud is a member of La Via Campesina and Confederation Paysanne; Tony Clarke is an author and President of Polaris Institute.