NEW DELHI -- As the Paris conference on climate change begins, it is apparent that, just like at the Copenhagen summit of 2009, there will be no solutions. This will happen despite the volte-face that large developing countries have made in the intervening years. These countries went to Copenhagen determined to defend their rights under the Kyoto Protocol because, as they rightly argued, they were being asked to forego, or at least to limit, their development to help solve a problem they did not create.

The catch lies in the fact that while the Organization for Economic Cooperation and Development countries are committing themselves to making cuts in their total emissions, the developing countries, with the exception of Brazil, are promising only to reduce the "carbon intensity" of their GDP growth.

In concrete terms this means that if China, which averaged a growth of about 10 percent from 2005 to 2015, clocks only 7 percent between now and 2030, its GDP will still be close to eight times what it was in 2005. A 60-65 percent cut in emission-intensity will therefore still mean an increase of up to 160 percent in absolute emissions since 2005. By the same token, if India were to continue growing at 7 percent for the next 15 years, its targeted reduction of emission intensity will still leave its absolute emissions at twice the level of 2015. Other developing countries will show similar increases depending upon their rates of growth. Thus, even if every country meets its commitments, the annual emission of GHGs is likely to rise by a third or more in the next decade and a half. At that point we will be so close to the tipping point that there will be nothing left to do except pray.

The cause of the impending failure at Paris is the same as the cause of the failure at Copenhagen: our bedrock belief that there are still no alternative sources of energy that can replace fossil fuels. This is not, of course, what our governments say, but the fact remains that thousands of new coal power plants are being planned or constructed around the world. 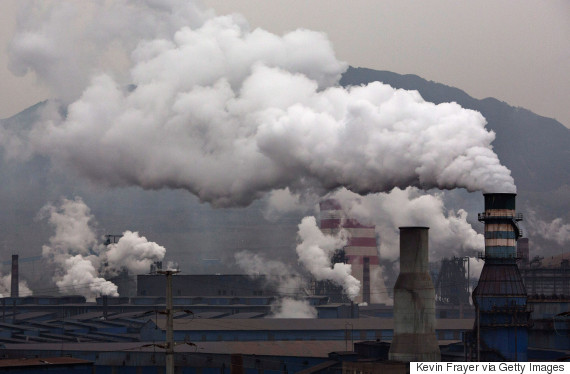 Smoke billows from smokestacks and a coal fired generator at a steel factory on November 19, 2015 in the industrial province of Hebei, China. (Kevin Frayer/Getty Images)

Paris will likely fail and, in the coming years, the anger of the rich will focus more and more sharply on the upstart poor. Does this have to happen? Had there been no alternative to fossil fuels it would have been unavoidable. But, contrary to worldwide belief, fossil fuels are no longer indispensable. Two of the many alternative energy technologies that scientists have been experimenting with during the past four decades -- solar and biofuel -- have matured to the point where they can make the world largely free of fossil fuels in as little as a few decades.

Solar photovoltaic energy is already being deployed rapidly across the world, and ethanol, produced by fermenting starch, meets 7 percent of America's net petroleum needs. But these can at most supplement, not replace, coal and nuclear power and oil-based transport fuels. That capacity rests in two so far neglected variants: concentrated solar thermal power and the thermochemical conversion of biomass, via gasification, into any form of transport fuel one may desire.

CSP power, unlike photovoltaic plants, is not limited by the availability of sunlight. As a result, while the latter produces power for a few hours a day, one solar thermal plant has been delivering an average of 6,500 hours of power a year. This is the Gemasolar plant, with a generating capacity of almost 20 megawatts in Seville, Spain.

Gemasolar has a built-in storage capacity of 15 hours. As a result it is able to provide power on demand; it also has a fossil fuel reserve to cope with prolonged periods of bad weather. In the summer of 2013, it celebrated its second anniversary by supplying uninterrupted power for 36 days .

CSP plants store the sun's heat in molten salt at next to no cost and with very little loss of energy over a 24-hour period. PV power can only be stored in batteries, which is prohibitively expensive.

Producing transport fuels from biomass, on the other hand, involves two chemical processes: gasification to produce carbon monoxide and hydrogen, jointly considered the basic building blocks of organic chemistry, and their synthesis, using various catalysts at varying temperatures and pressures, into whatever hydrocarbon one desires. 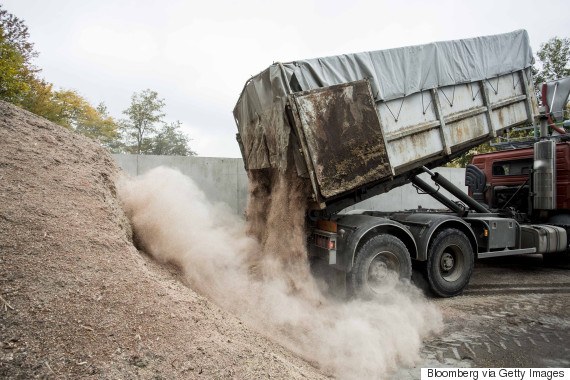 A truck deposits cereal waste, which will be used in biogas process, at a storage are at Beauval Zoo in France. (Christophe Morin/Bloomberg via Getty Images)

Humans have been carrying out the second conversion, using coal or natural gas as the feedstock, through a process known as the Fischer-Tropsch synthesis, for almost a century. But technologies for efficiently gasifying biomass other than wood have been perfected only recently. One in particular is capable of doing this with any type of biomass -- using wood waste or crop residues or sewage sludge or municipal solid waste -- and it too is coming rapidly into commercial use. It is called plasma gasification.

In 2014 British Airways signed an 11-year power purchase agreement to buy aviation turbine fuel produced from London's garbage using this process, at market prices. That project is expected to start producing in 2017. Three other airlines -- Qantas, SAS and Lufthansa have also agreed to collaborate with Solena .

BA's readiness to buy the fuel at market prices shows that the Solena process will need no subsidization. This is also true of both concentrated solar thermal and PV power, which are already close to competitive with coal-fired power in many parts of the world.

The U.S.-based company SunEdison recently won an auction for a 500 MW solar photovoltaic power plant in the Indian state of Andhra Pradesh for about 7 cents per kilowatt hour. Large solar thermal power plants have yet to be set up in India, but a calculation of its production cost, based on the technical specifications of the Gemasolar plant, shows that despite India's prohibitively high interest rates, a clone of the plant set up in the Rajasthan desert would be able to provide power at about the same price. 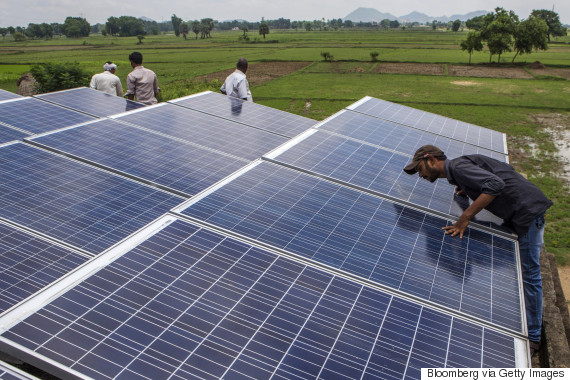 Not only do solar thermal power plants not damage the environment, but they also take only three years to build (and photovoltaic only two). Coal-fired and hydro plants, on the other hand, take about four, and nuclear six or more. The saving in time cuts down their true cost to society to a fraction of the cost of conventional power.

Another critically important advantage that these two technologies share is the ease with which they slip into the existing energy infrastructure of the world. Unlike PV power, solar thermal power stations require the same super-critical steam turbines that modern coal-based plants use.

Fischer-Tropsch transport fuels produced by gasifying biomass enjoy a similar advantage over first generation biofuels like ethanol and palm-diesel oil because they can be produced from crop wastes such as wheat and rice straw, bagasse and sugarcane leaf and stumps and black liquor, a toxic effluent from the paper industry that is currently dried and briquetted for use as boiler fuel.

Producing biofuels via gasification will, therefore, increase the productivity of agro-based industries, and, correspondingly, increase farm incomes. In developing countries it will, very largely, mitigate the impact of drought because when farmers lose their food crop, they will still have immensely valuable crop residues to sell to the biofuels industry. These two technologies can make the transition from coal to solar power almost painless. Seventy-four percent of the coal-fired power plants in the U.S. and many more in other countries are more than 30 years old, coming to the end of their natural lives in the next 10 to 15 years.

If the international community were to agree that these, and the plants now under construction, should be the last generation of coal-fired plants on the planet, they could offer inducements that will make it easier for existing power companies to shift to solar thermal power and remain in business. A modest tax on carbon -- specifically on coal, oil and natural gas -- is all that the world will need to finance and speed up the transition to biofuels.

Climate Change Is an Opportunity, Not a Threat
Concentrated Solar Thermal Power in Canada 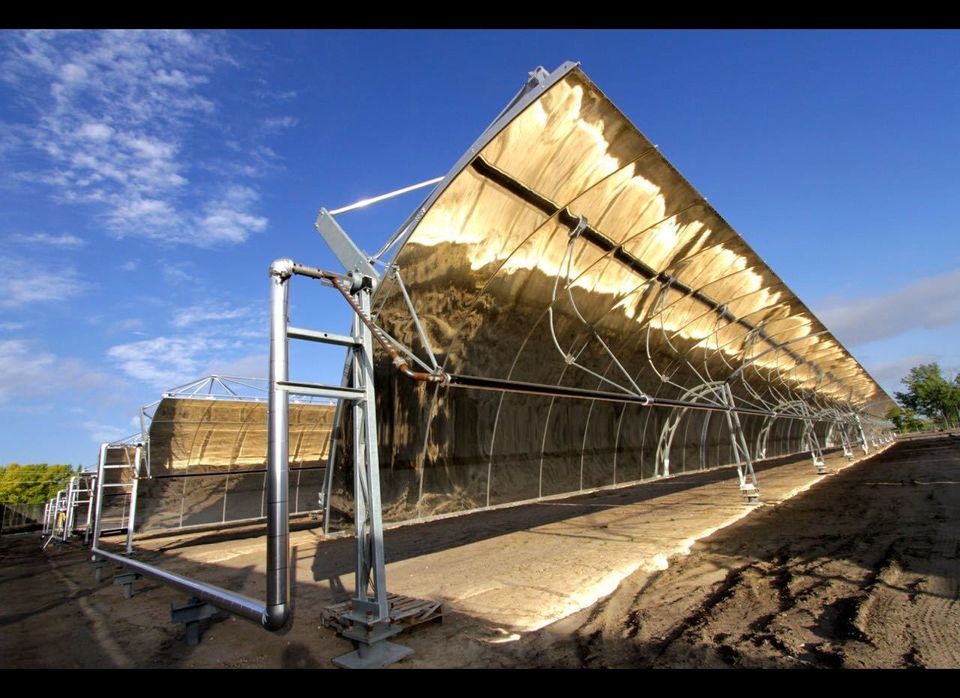