SEATTLE -- "That doesn't even look like a boat. How does it float?"

Elizabeth Spence, 8, peered through a chain-link fence at a massive yellow drilling rig, newly docked a short stretch away. Her dad had brought her here on Thursday evening to check out the latest addition to the Seattle waterfront and to add some local context to a current topic of study in Elizabeth's third-grade class: climate change.

She was quick with her take on that day's arrival of the first of Royal Dutch Shell's Arctic fleet. More than two dozen Shell vessels, including another oil-drilling rig, are expected to make Seattle a home base between oil-exploration trips in the Arctic's Chukchi Sea.

"I don't think oil should be used anymore," said Elizabeth. "I think we should use wind, tidal and solar -- all of those are more sustainable."

It's a sentiment pervasive in this left-leaning city, long recognized as a national leader on environmental issues. Earlier that day, as Shell's Polar Pioneer passed downtown Seattle en route to its new residence on the west side of the city, paddling protestors chanted from kayaks and canoes: "What do we want? Climate justice! When do we want it? Now!" Some held a banner that read, "Arctic Drilling = Climate Change."

Public resistance grew through the weekend and into Monday, with hundreds of activists converging by land and sea around the towering Arctic-bound rig -- local Native Americans and Seattle's former mayor, Mike McGinn, among them. They raised concerns about the risk of oil spills and the impact of fossil-fuel consumption on climate change. 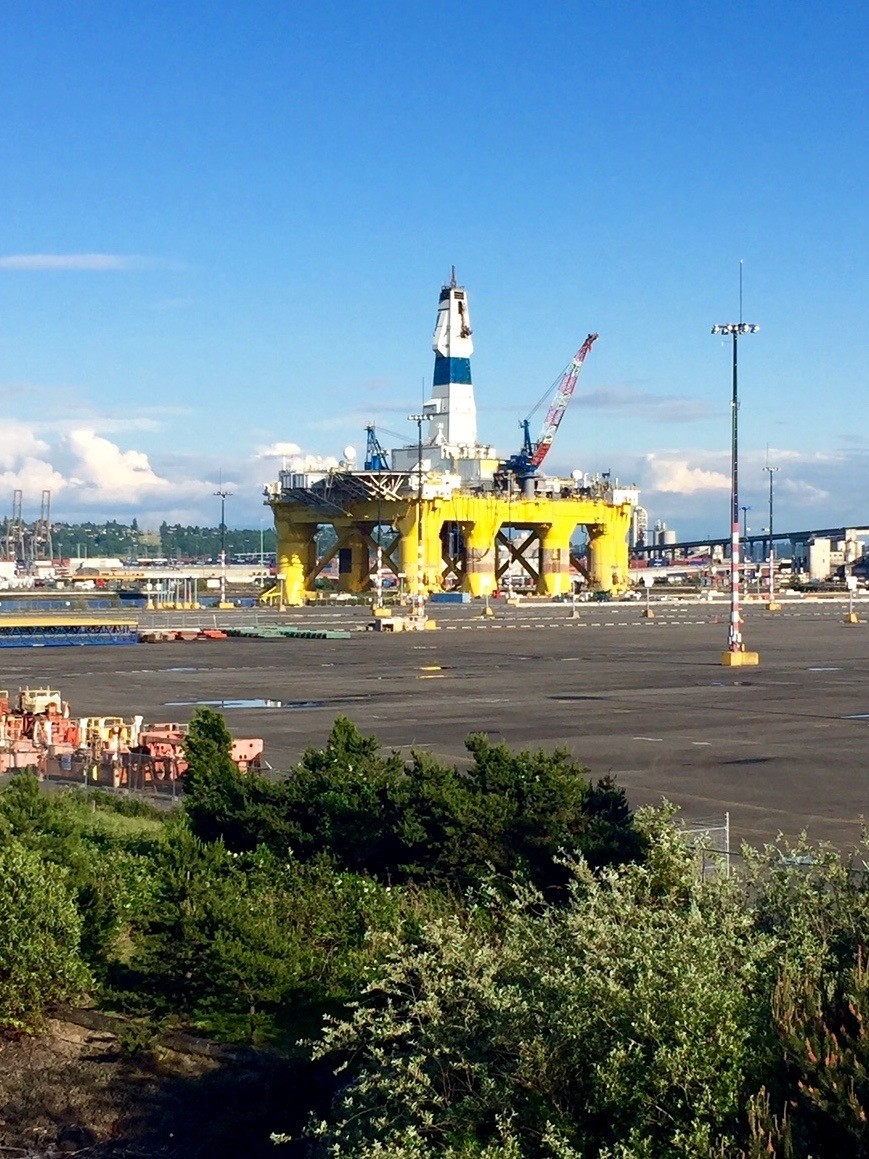 The opposition to Shell's drilling for oil in the Arctic, which the Obama administration conditionally green-lighted last week, is one way Seattle is showing it may be a poster child for the broader fossil fuel fight. The city's opposition also reflects some overlooked challenges posed by climate change.

The city certainly shows how conflicts can arise when business and political pressures are at odds with local culture and values. Many Seattle-area schools emphasize the environment in their curriculum, so it's little surprise that Elizabeth is preparing a sustainability project for an upcoming science fair. The region's native people, meanwhile, continue to carry on their ancestors' teaching that every decision must consider how consequences may affect children "seven generations" into the future.

On Thursday, as Shell's rig pulled into the Port of Seattle, which boasts the tagline, "Where a Sustainable World is Headed," nine tribal leaders convened to stand together against a proposed coal export facility slated for shoreline in the northwest corner of the state. The Gateway Pacific coal export terminal would send as much as 48 million tons of coal each year to Asia -- railed in from the Powder River Basin of Montana and Wyoming. The Lummi Nation and others are calling on the Army Corps of Engineers to deny the permit for what could be the nation's largest coal export facility, arguing that the project would disrupt treaty-protected fishing rights, harm sacred sites and threaten the future of their grandchildren -- not to mention the seventh generation.

A few miles away, that same day, the University of Washington became the largest public university in the U.S. to cut coal companies from its investment portfolio and Washington Gov. Jay Inslee (D) signed an oil train safety bill. A major oil terminal is proposed for the the Pacific Northwest, and oil trains are increasingly supplying four regional refineries.

Inslee was again in the climate spotlight on Friday as he declared a statewide drought emergency, largely the result of record-low mountain snowpacks. The announcement comes as experts warn of an early and likely intense forest fire season, and as local leaders push for innovative efforts to confront other climate-related challenges facing the region, such as ocean acidification, sea level rise, even the anticipated influx of climate refugees from California and other areas, where the effects are likely to be worse. (Even without factoring in these newcomers, Seattle's population is expected to increase by 15 percent over the next 20 years.)

"A compelling case can be made that the Pacific Northwest will be one of the best places to live as the earth warms," Cliff Mass, an atmospheric sciences professor at the University of Washington, wrote on his blog in July.

"Climate denial has reached its fullest expression when the melting of the Arctic ice cap is greeted as a signal to drill for more oil where the ice used to be," K.C. Golden, senior policy adviser for Seattle-based Climate Solutions, a nonprofit advocate for clean energy, wrote in an opinion piece in The Seattle Times in early May.

Kimberly Cisson, 47, of West Seattle, lamented as she looked out at the Shell rig -- 400 feet long and 355 feet tall -- from a foot ferry crossing Seattle's Elliot Bay on Thursday. Nearby, a small boat hoisted a banner that read, "Chief Seattle is Watching."

"I understand the interest in money and jobs," Cisson said, over the hum of the ferry and hovering news helicopters. "We can't escape oil in the world right now, but that doesn't mean we shouldn't work away from it. It saddens me that they want to drill up there."

"It's hard to get people to wake up," added Cisson, who is originally from Texas, the leading U.S. state for oil production. "Did we learn nothing from the Gulf oil spill?"

Environmental advocates said they hope other parts of the country, and the world, might take lessons from Seattle, where Native Americans continue to work alongside faith, political and environmental leaders towards shared sustainability goals.

Driving back from Thursday's meeting of tribal leaders, Cesia Kearns, a representative of the Sierra Club's National Beyond Coal Campaign, said she watched a coal train pass along the waterfront -- with the Polar Pioneer moving across the bay in the background. Still, she expressed her optimism: "We've already beat back four of seven proposed coal terminals."

"If we can replicate this around the country and with our international partners," added Kearns, "we should be able to usher in a clean energy future together that will benefit us all."

Tim Ballew II, tribal chairman of the Lummi Nation, whose reservation sits near the proposed coal export facility site, recalled seeing the "monstrous" rig being barged in as he returned to his car after the meeting. "Our job is to make sure resources are there in the future for our children," said Ballew. "The decision of the Lummi to oppose the Gateway Pacific Terminal permit is directly linked to that."

The Spence family of West Seattle is doing what they can, too. In addition to encouraging Elizabeth to pursue her passion for environmental conservation, they recently swapped their incandescent bulbs with energy-efficient LEDs.

"I hope with little changes like this," said Ted Spence, Elizabeth's dad, "we can reduce our need for drilling."