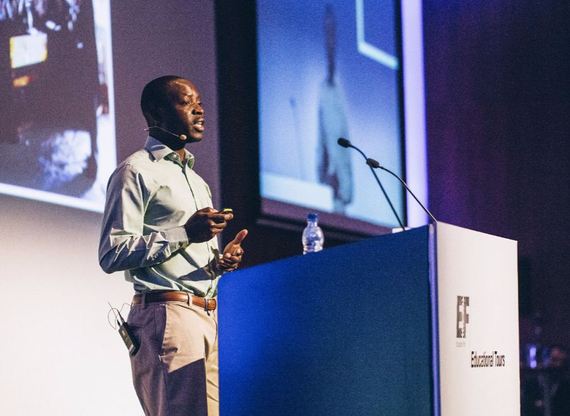 William Kamkwamba presents at the EF Global Student Leaders Summit last March in Iceland. The conference focused on the future or energy.

The reporter's voice blares through the television, impassioned by a need for change and an anger at the world's stubborn ignorance. Sea levels rising at an alarming rate. A global surface temperature that won't stop increasing. Warmer oceans. Shrinking ice. Ocean acidification. A teenager sits reclined, listening to the broadcast with an open but weary mind. "I know", they think. "I know. But what do you want me to do about it?"

For many, the often discussed task of 'combating climate change' seems like a distant and intimidating goal. A goal detached from any concrete change that we, as young people, believe we are able to make. But for a mind like William Kamkwamba, a mind so given to small acts of progress, such a goal becomes an easy reality. As I sat transfixed at the EF Global Student Leaders Summit in Iceland last March, listening to him speak of his work with an unmistakable fervor, I watched about 700 teenagers begin to contemplate the idea that combating climate change does not always need to occur through grand acts of scientific invention or profound discovery, but instead can often stem from making small scale changes with large scale impacts.

As a young boy growing up in Malawi, Mr. Kamkwamba witnessed firsthand what life was like without energy and clean water. During an exceptionally long and harsh drought, people were dying in his village. He says that "they were dropping down to nothing," and that "it was a future he could not accept." At age 14, with a mind fueled by creativity, he was able to create a windmill using scraps and spare parts from a junkyard to power his family home. This dream, to bring power to his home, soon became a dream for the village, to bring electricity to the whole community. With growing confidence and an unshakable tenacity, Mr. Kamkwamba built more windmills out of old spare parts and materials to light all of the homes in his compound, going from generating 12 watts to 200. His next projects would focus on clean water, malaria prevention, and solar power lighting for all of the homes in his compound. His work required a stubborn dedication to learning about and implementing clean energy. And much more than that - a dedication to making sure that his community would never have to suffer that way again. This incredible story is detailed in his best-selling book, The Boy Who Harnessed the Wind.

While at the Global Student Leaders Summit, I had the chance to introduce Mr. Kamkwamba on stage. But as I stood up there, making fleeting eye contact with the sea of teenagers who had likely heard about the potential impact of their actions so many times that it risked losing its meaning, I wondered if I myself knew what exactly this "impact" meant. For many devoted to energy sustainability, global impact is undoubtedly the end goal. But I began to realize that such progress comes about by a series of smaller scale impacts, carried out by those who want to see concrete change not just in the world at large, but in the world at their fingertips. Hearing Mr. Kamkwamba address all 700 of us, and later getting a chance to speak with him one-on-one, it became clear that I was underestimating the potential impact of smaller-scale change - and all of a sudden my perspective on "impact" became so much clearer.

Mr. Kamkwamba stressed the point that when it comes to the environment around you, "you can't just wait for someone else to come in and solve your problems." Nobody knows your community better than you, and nobody understands what is needed for its improvement better than you. Although the idea of innovation is universal, some of the most far reaching projects "start off specific to each community" he said, wanting every student to understand where local solutions come from. A solution may arise from a scientist experimenting with fusion, but it may also arise from a young boy sitting in his room creating a windmill out of bicycle parts and old pipes.

Several months after departing from Iceland, Mr. Kamkwamba's words have stayed with me. As I returned to school, I carried with me the reluctance of leaving behind an incredible experience along with the conviction that I must now lend myself to "starting small." Since then, I've been working with two other students in my class (who also attended the EF Iceland Summit) to convert our school campus to renewable energy by the means of a windmill. For students who spend the majority of their days in our school building, this project is about as local as it gets. We researched the markets, vendors, and feasibility of such a process, hoping to make the same kind of concrete change Mr. Kamkwamba praised.

Unfortunately, we were recently told that the installation of a windmill would be both impractical and unlikely, effectively ending that pursuit. But, as was mentioned countless times over the two days at the conference, true strides in clean energy would not be possible without failing, and failing fast. We hope to continue pushing, until our school community benefits from renewable energy just as Mr. Kamkwamba's village did so many years ago.

When it comes to combating climate change, no special qualifications are needed. In fields of continuous innovation such as sustainable energy, there are countless big ideas. But just as important are the small ideas, the ones that bud in your mind and gradually turn into small actions. These often may seem irrelevant, but they truly are essential. William Kamkwamba claims that "challenges are opportunities waiting for you to explore them." So go explore!

Nisha Chandra is a rising high school senior from Connecticut

This post is part of a series produced by The Huffington Post and EF Educational Tours about the recent EF Global Student Leaders Summit, which explored the future of energy from Iceland. The Summit Series combines educational travel with a two-day leadership conference, and asks students to tackle global challenges in places where those challenges are notably present or well-addressed. To view all posts in the series, visit here.

For more than 50 years, we've been working toward one global mission: Opening the World Through Education