Looking above at recent temperature anomalies, much of the US is experiencing cooler than average temperatures; the east Pacific warm spot still prevents much rain from reaching California, continuing the long term drought.

Much of the Arctic Sea surrounding the North Pole is cooler than normal, but full summer days are continuing to melt the diminished ice cap - not good news for our Arctic thermal shield of ice. Hotter than usual temperatures continue to dominate human habitats.

(Add 0.3-0.4 C to have these anomaly values calibrate with those of NASA.) Daily updates of can be seen here for both the temperature anomalies map, and the jetstream map. For real time animated US surface wind patterns, click here, and here, for the planet. (Clicking on "earth" there reveals data and map options.)

A radar crossection image, 3000 meters deep by 150 kilometers long, of the finely layered structures beneath the surface of a Greenland glacier. Credit: Mike Wolovick, Columbia University.

Frozen Underworld Discovered Beneath Greenland Ice Sheet - where melting and refreezing has created gigantic finely layered structures, reports Suzanne Goldenberg at the UK Guardian. Understanding how that complex structure affects the speed of melt is the next challenge.

The US solar industry continues to draw venture capital, with another $350 million recently added to the pot. China is now investing substantially in the US cleantech industry and worldwide, with hundreds of commitments to solar and wind in dozens of countries, totaling more than $40 billion.

Nationwide, the deployment of microgrids increases as companies set up strategic partnerships; microgrids allow whole communities to be powered by solar energy.

In Massachusetts, solar policy advanced in a new deal between utilities, regulators and industry. Meanwhile, a push in Utah to impose extra fees on rooftop solar customers is sparking outrage.

OO Past 'Pause' In Global Warming Based On Bad Data - GW Continued Unabated - yup, there has been no pause... much as we all might wish there had been one....

Trillions of dollars are potentially at stake, since corn touches on almost every aspect of the US economy. Popcorn, anyone?

Some countries are already hoarding water and food supplies. The expected weakening of the Indian monsoons, crucial for crops, has already begun.

The US west is expected to gain some much needed precipitation, and indeed, rain has fallen in the Gunnison area of the western Colorado Rockies during June, which tends to be a dry month there. Rain has also occurred in Santa Fe in June, which is also to be expected under an El Nino influence. 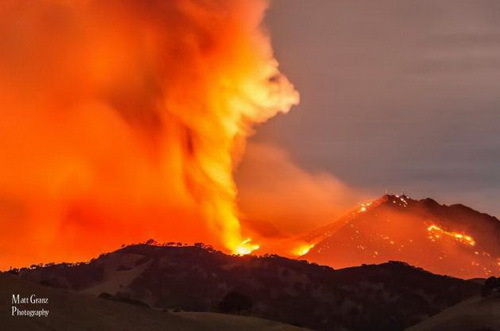 For more in-depth coverage of the issues, click here.
*
*

OO Daddy, Could We Have Our Planet Back Now? a father's day essay, by a father.

This is a gut-wrenching video at times, listening to farmers explain how they want to keep their farms and water supply, the Ogallala aquifer, safe from the contamination of a planned giant leaky pipeline that the US doesn't need.

Check it out, then please tweet the video here directly to the Senators who are deciding the fate of the pipeline this week.

Climate Hawks Vote : Their goal is to elect leaders who prioritize and speak on the climate crisis. Climate change is the greatest threat facing the next few generations of humanity, not just another issue, but too many politicians are afraid to talk about it.

So, they're scoring members of Congress, nominating candidates to support, and fundraising for selected candidates. You can check them out, and help.

The current plant to limit power plant emissions doesn't apply to plants on native American reservations, such as the Navajo plant in Arizona. Credit Troy Snow/flickr

OO Air Conditioner Use in Cities Trigger Vicious Cycle as heat waves drives people to turn them on, and the conditioners end up spewing substantial amounts of heat -- right back into the atmosphere.

The Cloudier Northeast Has Its Share Of Solar Power. Light to dark brown signifies increasing solar potential; yellow dots show most of the US solar power generating facilities. Credit: EIA

OO Two Years Early, Wisconsin Hits Goal To Get 10% Of Its Electricity From Renewables

OO Finland Sets New, Ambitious Goal For Cutting Greenhouse Gas Emissions - becoming the latest European nation, after Denmark, to do so, adding its momentum to efforts in the E.U. parliament, China, and the US.

Reacting to pressure from a public campaign by the World Wildlife Fund, an oil company gave up looking for oil in Virunga National Park, home to one of the last populations of gorillas on earth. Credit Fiver Locker, at Wikipedia.

Nilcilena Miguel de Lima, mother of 4, finally went into hiding after they beat her, burned her home down, killed her dog, frightened away her armed guards, and killed her activist friends. She hides, while the criminals roam free. Credit Jonathan Watts

Hundreds Have Died, Trying to Save Their Amazonian Rainforest reports Jonathan Watts et al at the UK Guardian, as Brazil fails to protect activists from powerful, illegal forest exploiters. On average, an activist dies every week.

OO Oil Drilling Causes Widespread Contamination In The Amazon Rainforest - Decades of oil extraction in the Western Amazon has caused widespread pollution, finds a new study, raising questions about the impact of a new oil boom there.

Forests are the cheapest way to store carbon, and beautiful biodiversity, such as these Birds of Paradise. Credit Cornell Laboratory of Ornithology

Hug a Climate Scientist Day! Climate scientists carry the biggest burden of all: they know our planet is going to turn into a reheated chicken nugget, says First Dog on the Moon, at the UK Guardian. So, why not have a day dedicated to hugging them? It's now officially June 12th. Check out the entire hilarious cartoon here... and, go ahead, hug a climate scientist - any day!

Protecting Rainforests Could Sequester About A Third Of Global Emissions Annually says a new study, reports Rhett Butler at Mongabay.com. Eliminating deforestation, peatlands and forest degradation, and forest fires in the tropics could reduce global carbon emissions by two billion tons a year, or nearly a fifth, argues the study.

The research analyzed various emissions sources and sinks across the tropics. They found that carbon emissions from activities that damage and destroy forests are nearly counterbalanced by forest regrowth, reforestation, and afforestation.

OO US Cap-And-Trade Could Be Cheaper Than Power Plant And Car Regulations, Study Finds

OO How To Save Time, Money, Energy, And Carbon Emissions While Drying Your Clothes - US homes are wasting up to $4 billion worth of electricity annually - and emitting roughly 16 million tons of carbon dioxide - just because residents are drying their clothes inefficiently.

OO California Could Close Its Water Gap With Room To Spare - by using a combination of water conservation and efficiency strategies.

OO Renewables as Tourist Attractions? Only in Germany

Pricing US carbon emissions could ultimately result in the creation of nearly 3 million US green jobs over the next few decades. Credit: REMI, Inc.

OO The Current Economic Model: A Destructive Social Construct? We need to acknowledge that the economic system is a belief which can be restructured to benefit the planet.

Every day is Earth Day, folks, as I was reminded by this skipper butterfly I photographed recently. Making the U.S. a global clean energy leader will ensure a heck of a lot more jobs, and a clean, safe future. If you'd like to join the increasing numbers of people who want to TELL Congress that they will vote for clean energy candidates you can do so here. It's our way of letting Congress know there's a strong clean energy voting bloc out there. For more detailed summaries of the above and other climate change items, audio podcasts and texts are freely available.