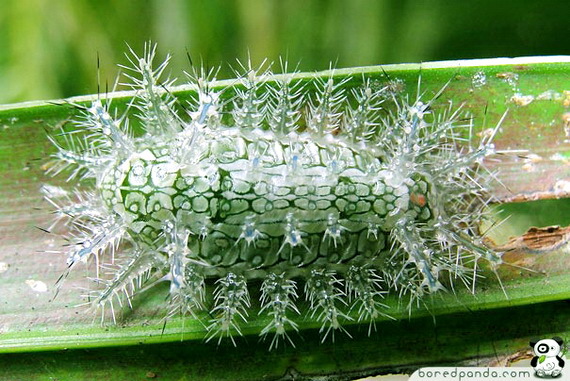 It's a Cuke! It's a Popsicle! No, no, it's a ... Caterpillar! from an Asian rainforest: one more reason to preserve these carbon-storing ecosystems. Source bayucca at flickr 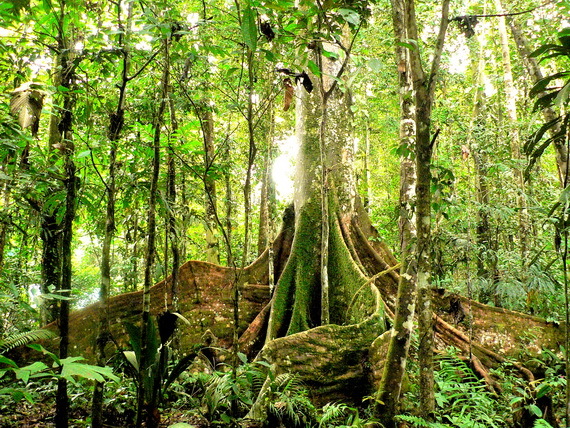 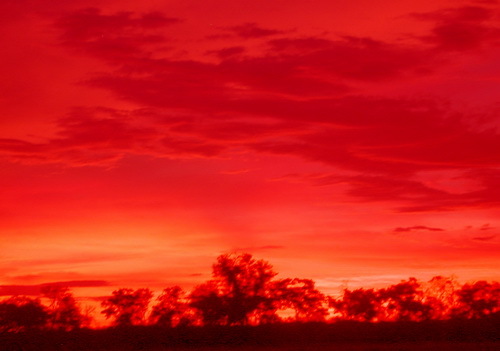 OO 2015 Blew Away Previous Records To Become Earth's Hottest Year - The combination of a record strong El Niño event plus the highest amount of greenhouse gases in the atmosphere at any time in human history have given the climate system the equivalent of a Power Bar plus a shot of espresso. 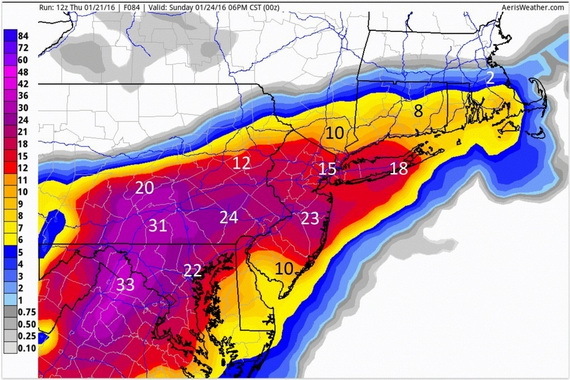 Jonas was a Whale of a Blizzard with a 1,000 mile long front dumping near record levels of snow from Virginia and Washington DC up to New York City and beyond, and creating coastal surge flooding. Both snow and flooding records were broken. Credit AerisWeather 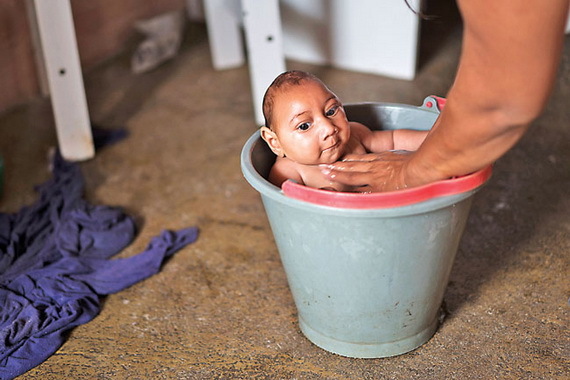 Mosquito Borne Zika Virus Linked to Small Brained Babies - in Brazil, and increasingly elsewhere. Women in their trimester of pregnancy who are infected by daytime mosquito bearing Zika virus are increasingly giving birth to microcephalic babies. The virus may last only a week or so in the women, but permanently harms the baby. Source bn.thetodaypost.com

OO Under Global Warming, Multiple Mosquito Borne Epidemics
Could Occur Simultaneously and the US must prepare for such a scenario, warn doctors in a new report in The New England Journal of Medicine.

OO Climate Change Economically Threatens Global Middle Class - the erosion of wealth among the world's middle class due to climate change is a threat to economic and social stability; this could spur its 1 billion members to push for action on global warming, Swiss bank UBS Group AG said. 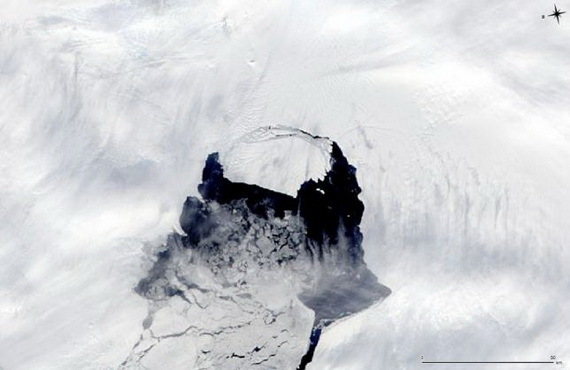 Antarctic Iceberg Birth as seen from a NASA satellite.

Diving in Death, a young murre was one of many such seabirds found dead in 2015 in California; now tens of thousands are dead in Alaska, as warm waters reduce their food stocks, scientists suggest.

OO Mysterious Mass Deaths Of Alaskan Birds Baffles Scientists -Tens of thousands of dead birds are washing up on the beaches of Alaska's Prince William Sound; some experts say it may be related to the changing climate. 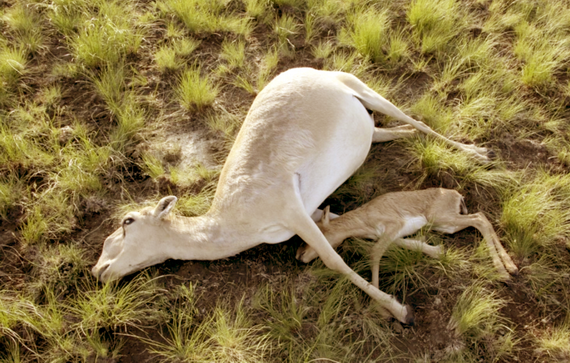 Mother And Child in Death - over half (200,000+) of this species, the once populous antelope of the vast Eurasian steppes, perished in 2015 as unusual extreme weather left them vulnerable to lethal disease.

OO In Pitiful Animal Die-Offs Worldwide
-- From Antelopes To Bees To Seabirds --
Climate Change May Be Culprit - which, along with El Nino, created enough extreme conditions to create massive carnage. Some of the most dramatic examples in 2015: 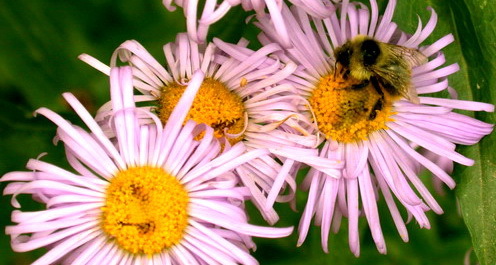 To Bee or Not to Bee? Wild bumble bees are on the decline, as well as domestic honeybees.

Common to all of these die-offs::
the species' environments are changing, and they're struggling to keep up.

OO South Africa Suffers Driest Year On Record In 2015 as a drought that threatens the vital maize crop and hit economic growth shows no sign of abating. 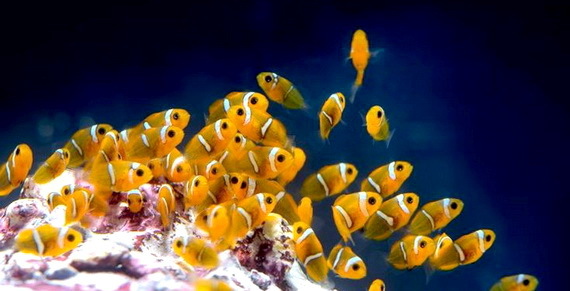 How Will Nemo Get Home? This school of baby clown fish faces a threatened future.

OO Baby Fish May Get Lost In Silent Oceans As Carbon Dioxide Rises - Future oceans will be much quieter places, making it harder for young marine animals that navigate using sound to find their way back home, new research has found. 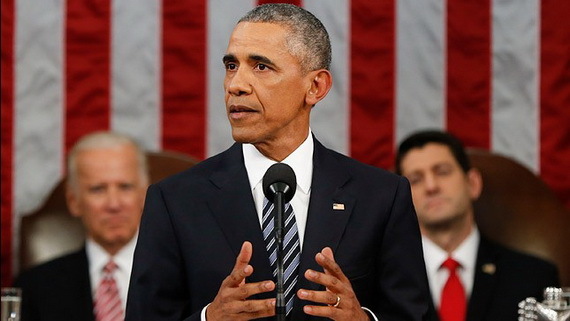 OO Fossil Fuel Leases Should Charge
For Climate Change, Says President - he wants companies leasing oil and coal rights on federal land to pay more for the effects those fuels have on climate change. 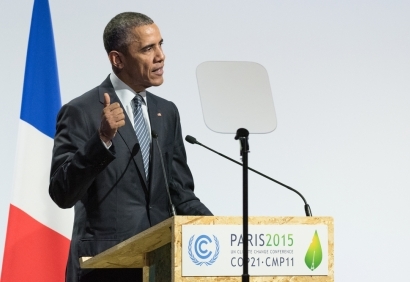 "Why would we want to pass up the chance for American businesses to produce and sell the energy of the future?" 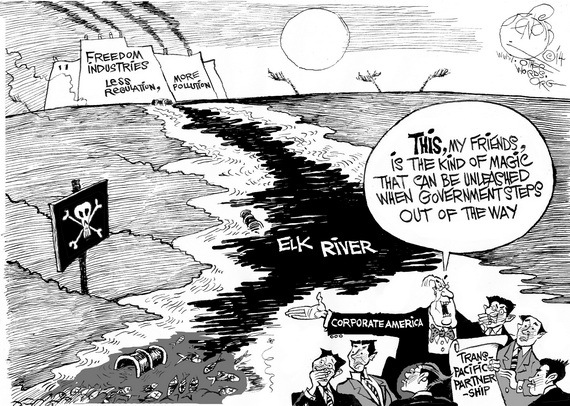 OO GOP House Allows Coal Mining to Pollute America's Streams by appoving a bill that does so, by blocking new Obama administration regulations designed to reduce the environmental impact of coal mining on the nation's streams. Gee, thanks, guys! 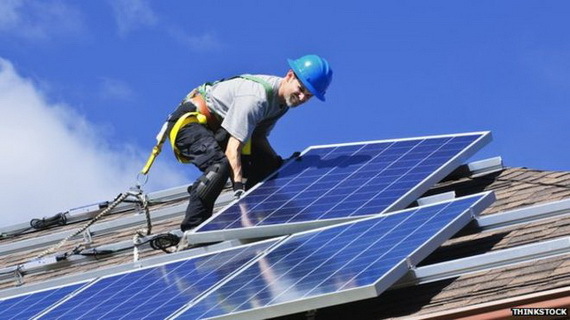 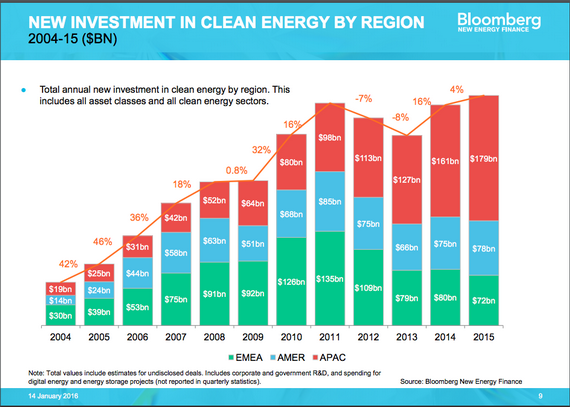 In his final State of the Union address, U.S. President Barack Obama said the U.S. must stop subsidizing fuels of the past. Source Reuters

OO Why Clean Energy Is Now Expanding Even When Fossil Fuels Are Cheap - Because:

OO Hints And Nods Point To Vast Energy Changes - in the past 7 years, including:

"Meanwhile, we've cut our imports of foreign oil by nearly 60%, and cut carbon pollution more than any other country on Earth." said President Obama. 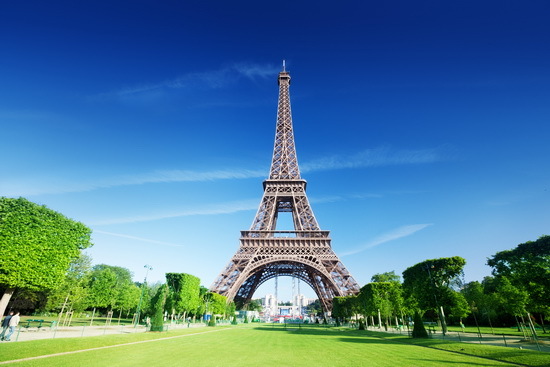 OO Rapid Switch To Renewable Energy Can
Put Paris Climate Goals Within Reach - Countries can deliver on the promises of the historic Paris climate change agreement by rapid scaling up wind and solar power to 36% of the global energy mix by 2030, an international energy gathering was told.

OO State Renewable Energy Mandates Are Producing Enormous Benefits - As the policy workhorse behind the rapid rise of renewable energy in the U.S. 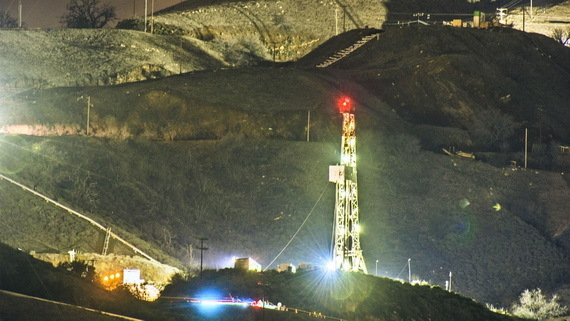 OO Utility May Have Understated Health Threat From Gas Leak including the number of times airborne levels of the cancer-causing chemical benzene have spiked.

OO The World Is Hemorrhaging Methane,
And Now We Can See Where - The Aliso Canyon breach is accidental, but thousands of other sites are flaring off methane intentionally, as waste.

Another Form of Fossil Fuel Subsidies... remember Mitt? And now we have so many GOP presidential candidates that fill his shoes! Brings tears to my eyes. Credit Dave Granlund

OO US Taxpayer Due To Subsidize Koch-Controlled Coal Mine

OO US Coal Companies Getting Pummelled In Stock Market

OO One of the Largest US Coal Companies Filed For Bankruptcy 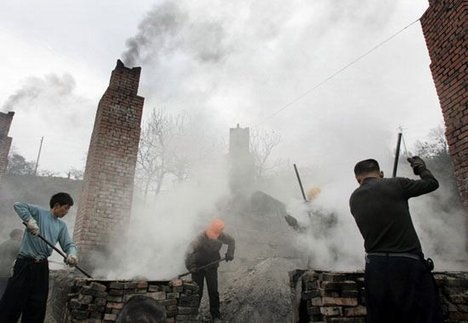 False Reporting Does Not Change Pollution Levels in China, which then get blown to the US 10 days later. It undermines their international standing.

OO Southeast Asia High In The Ranks Of Global Polluters - Carbon dioxide emissions from fossil fuels rose 227 percent from 1990 to 2010.

@@ Myth vs Truth: The Huge Value of Contraception is an incisive, heartfelt recognition of the value of contraception by Sarah Brown, CEO, The National Campaign to Prevent Teen and Unplanned Pregnancy

OO Solar Power: The Next Energy Jobs Juggernaut? As the price of solar power continues to plummet - and the costs of extracting oil, gas, and coal continue to rise - solar is emerging as a significant job creator in a shifting energy economy. 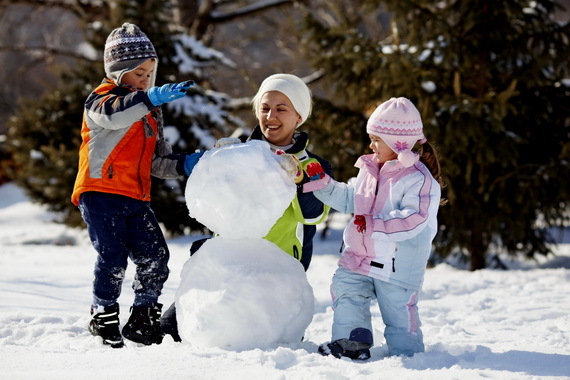 Imagine Staying REALLY Warm as you build your snowman; now MIT has created a material that might someday be used in clothes to capture and retain solar heat. As the sun glows, so do you! Source wotv4women.com

OO MIT: New Material Can Store Solar Energy to Warm You Up Later - While solar power is used to generate electricity, one could save even more power by storing heat. MIT scientists have created a new thin transparent film that does exactly that. When exposed to sunlight, it assumes a "charged" state that can be maintained for long periods of time.

However, when triggered with a small burst of heat, the material reverts to its original chemical composition, releasing a much larger amount of heat energy. Possible future applications? Self-defrosting windshields, warming your home - or your clothes! 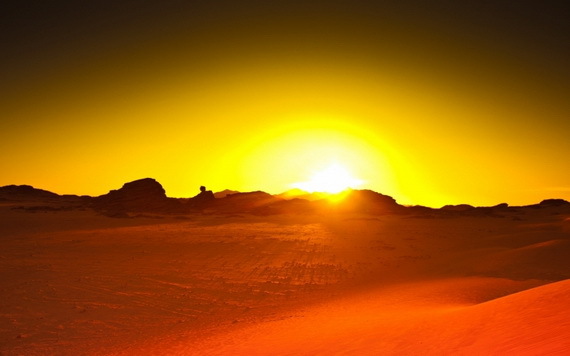 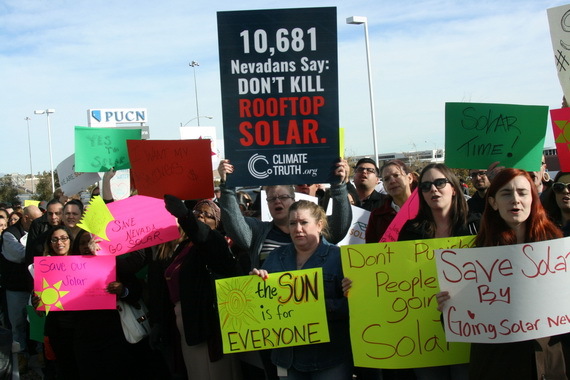 OO SolarCity, Sunrun to Pull Out of Nevada, Cutting Hundreds of Jobs due to the new rules, which decrease the savings that many count on for going solar.

OO GOP Nevada Leaders Oppose Solar -
And Might Help Elect A Democratic 2016 President - indicates a poll among state voters, roughly 90% of whom support solar power, as in rooftop solar installations. Roughly 70-80% of polled likely voters would be "unlikely" to re-elect a politician who failed to raise the solar net metering cap - and that could influence their presidential votes, as well. 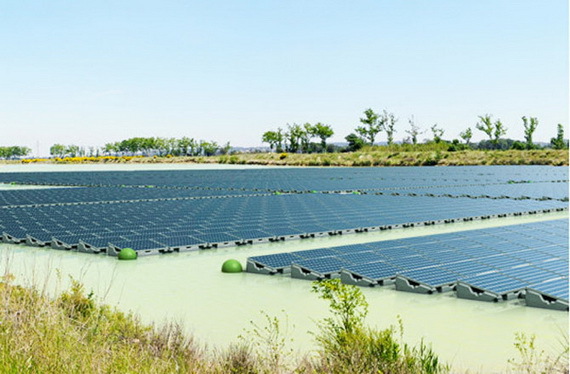 OO Solar Energy Farm Floats on Reservoir - in France, illustrating how solar arrays could float on reservoirs, quarry lakes, irrigation canals or remediation ponds. Such installations can make these waterways serve a double purpose as they reduce evaporation.


OO Chile: Innovative Project To Provide 24/7 Renewable Energy
To Village - a solar powered pumped-storage hydroelectric plant will pump seawater up a cliff on the coast using solar energy, to a natural storage basin at an altitude of 600 metre. At night, the plant will generate electricity by releasing the stored water, which will rush down through the same tunnels. 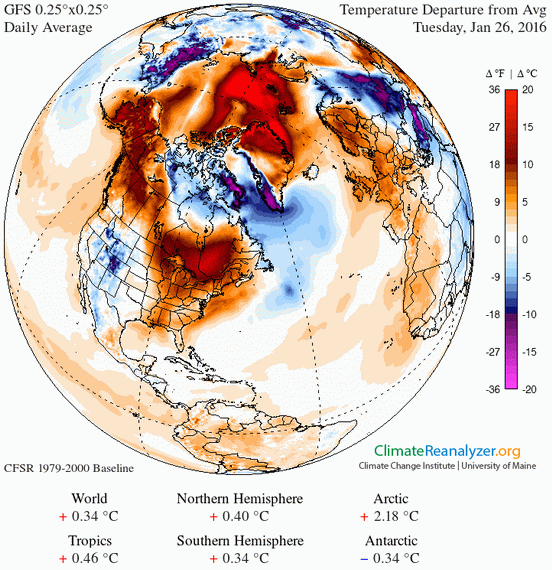 Looking above at recent temperature anomalies, much of the US and the waters surrounding it are experiencing warmer than normal temperatures: the eastern Pacific warm spot continues to prevent enough rain from reaching California, to stop the drought.

Meanwhile, a recent monster blizzard and accompanying coastal storm surge flooding, paralyzed temporarily much of the US east coast. Two effects of climate change fueled the event: unusually warm coastal waters supplied the air moisture and heat that, with an Arctic invasion of cold air, transformed into high winds and lots of snow.

Every day is Earth Day, folks, as I was reminded by this wild iris I photographed one spring. Making the U.S. a global clean energy leader will ensure a heck of a lot more jobs, and a clean, safe future. If you'd like to join the increasing numbers of people who want to TELL Congress that they will vote for clean energy candidates you can do so here. It's our way of letting Congress know there's a strong clean energy voting bloc out there. For more detailed summaries of the above and other climate change items, audio podcasts and texts are freely available. 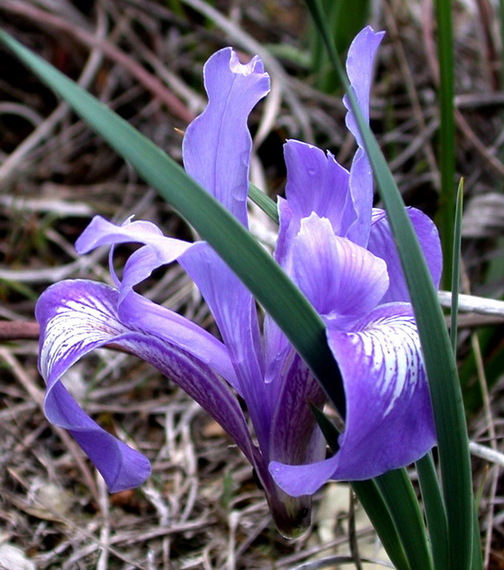