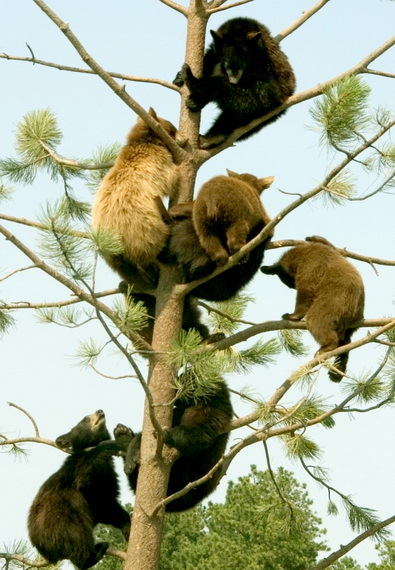 The Bear Cub Club meets in the Tongass National Forest, which, with the Great Bear Rainforest is part of the Pacific temperate rainforest, the largest such ecosystem in existence. Source fluffyfeet at pinterest.

OO Canada: Most of Great Bear Rainforest Is Now Permanently Closed to Logging

OO Another Reason to Save Forests: Adorable Biodiversity - as this rare footage shows of two young primates, Fio, an orangutan, and Chili, a gibbon, playing away in the peat swamp trees of Borneo. Chilli launches surprise tickle attacks on Fio. 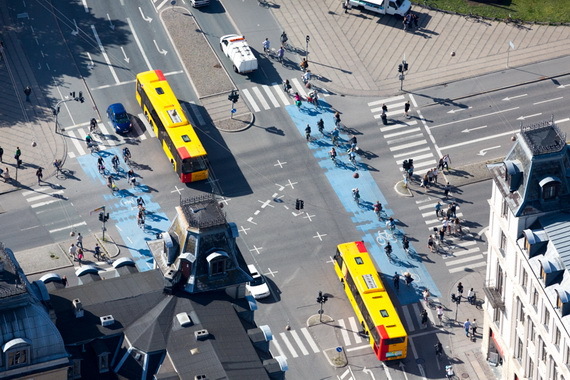 @@ An Energy Efficient Carbon Landscape - Europe manages a high standard of living using less than 50% of the US emissions per person. It's tied to the landscape, this photo essay shows, through:

"How we organize ourselves on the ground is the key factor determining how much fossil fuel we burn," photographer Alex MacLean says.

Preserving Life: An overlooked tool in fighting climate change is enhancing biodiversity to maximize the ability of ecosystems to store carbon. Key to that is preserving top predators to control populations of herbivores, whose grazing reduces the amount of CO2 that ecosystems absorb. 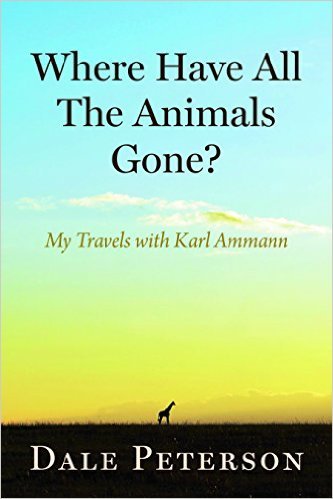 OO Where Have All The Animals Gone? "witty, humorous... gut wrenching" chronicle of how humans are driving the disappearance of animals - in this case, through Asia and Africa.

OO How to Finance a Trillion-Dollar Climate Change Opportunity - The good news is: we can! Major financial analysts find there is enough money at play in the world's financial markets to finance the transition.

But policymakers in every country will need to "mind the gap" of over $200 billion annually for the electric power sector that needs to be mobilized to help assure it happens in time.

OO Switch To Clean Energy Can Be Fast And Cheap - Strategically placing solar and wind farms across the U.S. could compensate for power lulls during cloudy or calm days.

OO Going Green Can Add Value To Your Home - especially in the Washington DC area, says a new study conducted by national appraisal experts: energy improvements and resource-conserving efforts can be worth tens of thousands of dollars.

OO U.S. Economic Growth Free From Both Energy And Electricity Use - In a stunning trend with broad implications, the U.S. economy has grown significantly since 2007, while electricity consumption has been flat, and total energy demand actually dropped.

OO West Coast States Could Cut Petroleum Consumption in Half by 2030 says a new study, through policies that encourage greater transportation options and the more robust use of existing and emerging low-carbon technologies, and they are already on the way. 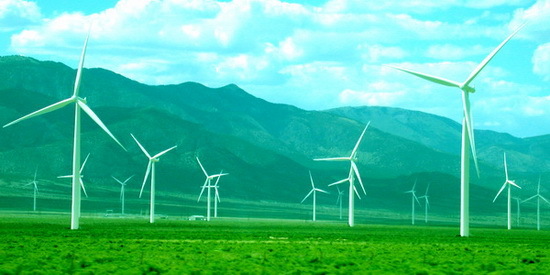 Yo, Frackers - Feel the Bern?

Copenhagen's mayor has announced plans to divest the city's $1+ billion investment fund of all holdings in coal, oil and gas. 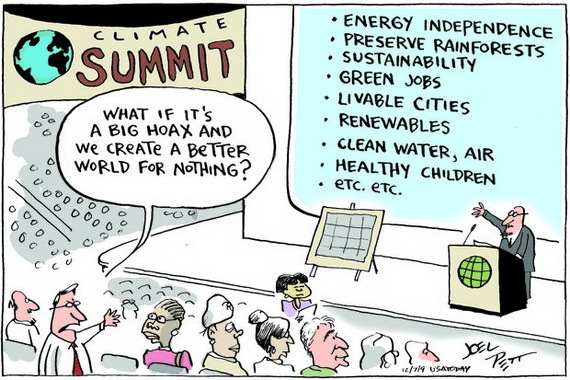 OO Republicans Reject Climate Change Fears
Despite Rebukes From Scientists, Voters - Ted Cruz has presented 'misleading' information in the Senate, scientists say, while Marco Rubio rejects 'destroying our economy' - despite pleas for action coming from officials in his own state. 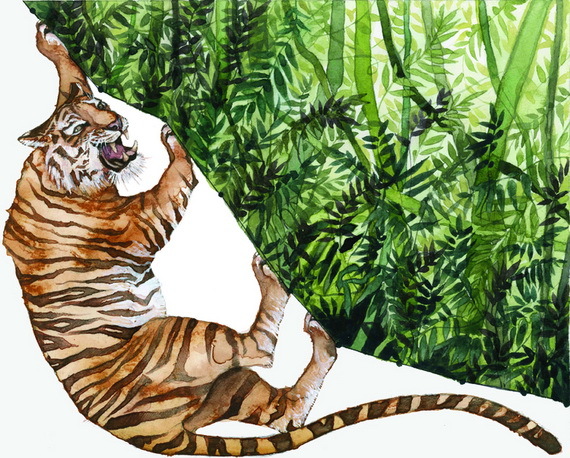 Tiger, Tiger endangered throughout most of its range, now barely holds onto a graph showing the disappearance of its habitat, forests, over time, in this piece by Jill Pelto. Credit Jill Pelto www.jillpelto.com 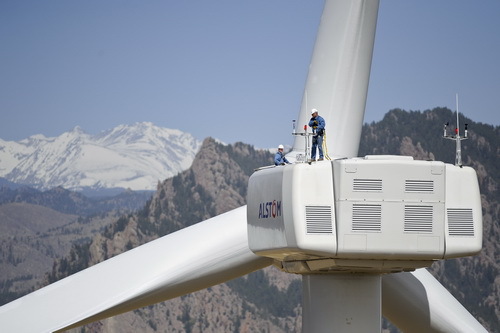 OO Grid For Renewables Key To Cutting Emissions - carbon dioxide emissions from generating electricity could be cut by nearly 80% by 2030 if the US makes the same Herculean effort to expand solar and wind technology that it did to build the Interstate Highway System.

OO Companies Need To Fix Environmental 'Blind Spot' In Supply Chains Many multinationals have a blind spot in judging the environmental impact of their suppliers' operations, adding to corporate risks linked to climate change, says a new study. 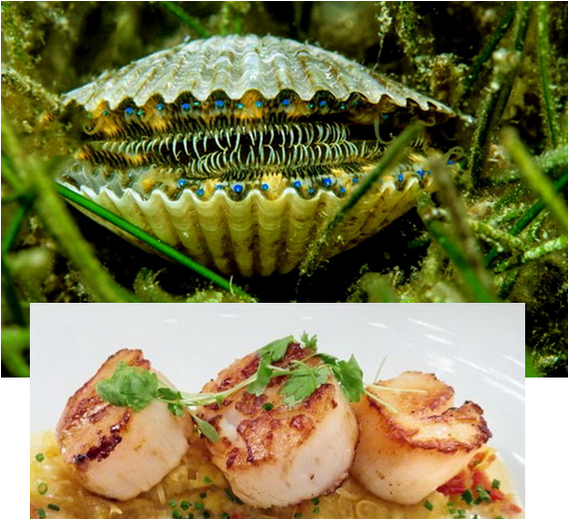 Climate Change Threatens A Delicious, Blue-Eyed Wonder - scallops, which are declining in the eastern US, as warming waters are linked to the die-off of their seagrass homes, and overfishing occurs. They are a delicious seafood to many. 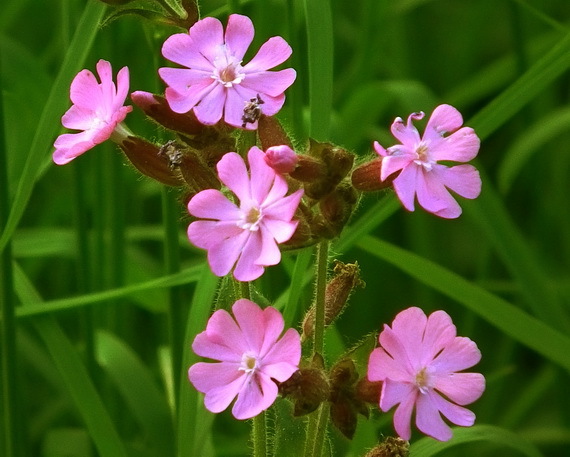 Five Months Early - red campion and a host of others were blooming away in the UK on New Year's Day. Credit Rote Lichtnelke at wikimedia

OO Monumental Floral MisMatch:
600+ Kinds of British Wildflowers Bloomed Early,
New Year's Day 2016 - a major survey shows, after a record warm December, far more than ever recorded before. It may sound pretty, but the fate that awaits them isn't: lack of bees and returning cold means they are unlikely to create surviving seed. Having expended that flowering energy now, they are less likely to bloom later in spring and summer, when they could produce surviving seed. 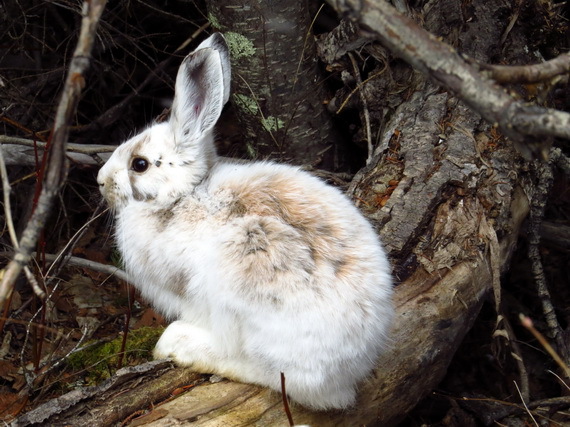 Too White Too Late - the white hare is an advertisement for a raptor against a dark melting landscape. Source www.mpgnorth.com

OO Climate Change May Be Deadly For Winter Camouflage Animals: Snowshoe Hares - as precipitation replaces snow earlier in spring and later in winter under warmer scenarios, leaving seasonally camouflaged animals out of step, and visually exposed to predators.

OO As Climate Changes Snow,
Animals Suffer - snowpack is a refuge for many winter animals. It:

And there may be more damaging effects to winter animals.

OO Ocean Warming Is Making Floods Worse -a new study blames expansion of warming waters for as much sea level rise from 2002 through 2014 as the melting of all the glaciers and the Greenland and Antarctic ice sheets combined. 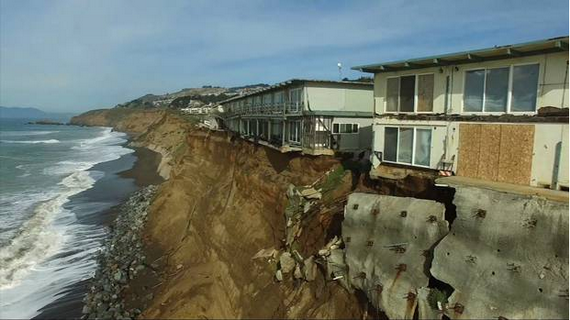 Ready to Drop - after another good storm, these houses might be found on the beach - deconstructed. Source www.theglobeandmail.com 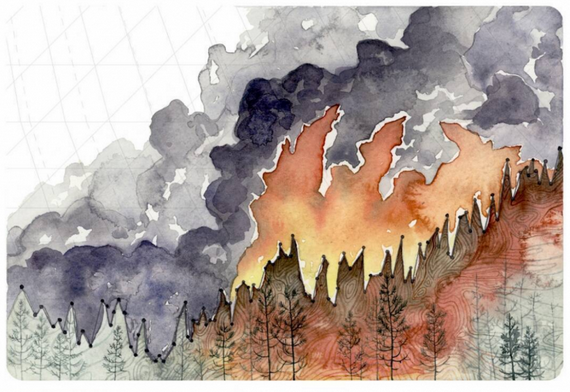 As temperatures rise, so do damages from wildfires. Credit Jill Pelto, www.jillpelto.com

OO Soil Productivity Cut By Climate Change,
Making Societies More Marginal say new studies: The health of the world's soils hinges on the microbes and fungi they contain; environmental changes will undermine their ability to support humans and other species. 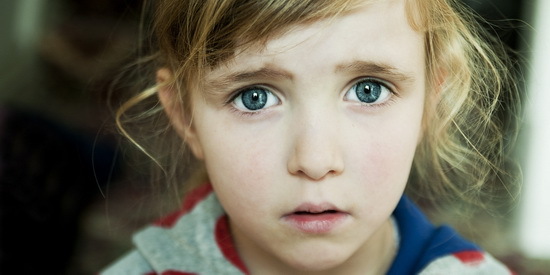 Think About What She'll Face - and her grandkids, if we fail to dramatically slow climate change. Big bad changes are underway.

Beyond that, there will be much bigger changes, which will affect the young child you have now, and her/his grandchildren.

"If you screw with the climate enough, you have huge extinctions," he adds. Our civilization is likely to be one of them.

OO What You Need To Know About Zika And Climate Change - chief among the number of factors behind the quick and wide spread of the Zika virus -- a disease that's been associated with birth defects -- is heavy rain and heat, both helped by climate change.

One of Millions Homeless -The number of climate change refugees in Bangladesh is expected to increase dramatically in the coming decades. Credit Probal Rashid 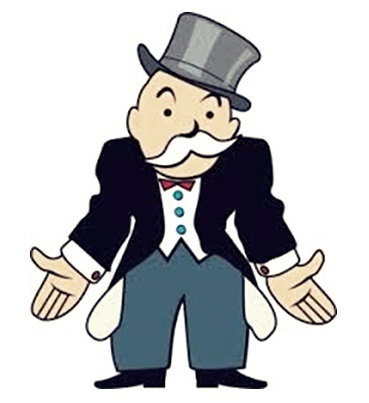 OO Big Banks Brace for Oil Loans to Implode as dozens of oil companies have gone bankrupt, and the ones that haven't are feeling enough financial stress to slash spending and cut tens of thousands of jobs.

OO Australian Coalmines Are One Of Riskiest Investments In The World because of their exposure to environmental dangers, says a new report from Oxford University. 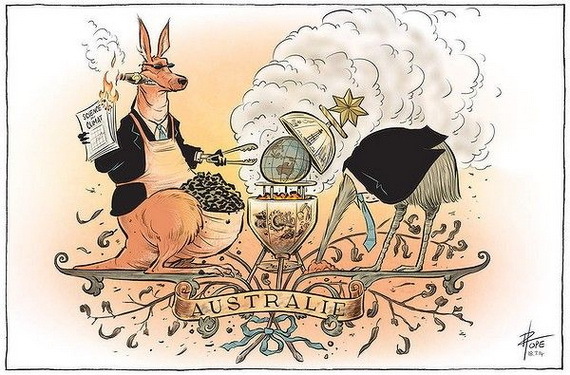 OO Australian Emissions Rising Towards Historical Highs -
Will Not Peak Before 2030 based on current trends, with the projected growth rate one of the worst in the developed world, a new analysis says.

OO Norway: Industry Plans To Up Fossil Fuel Production Despite Paris Pledge - Norway wants other countries to leave their coal and oil in the ground to meet new global climate change targets instead. Gee, thanks guys!

@@ The Cost of Unintended Pregnancy: Too Young

@@ VIDEO: Japan's Solution To Its Energy And Space Crisis:
The World's Largest Floating Solar Power Plant - a company has work on what they say will be the world's largest floating solar installation by the amount of power produced.

OO Rwanda, Africa: Company Will Bring Solar to 250,000 Homes by 2018 as the country preps for millions of solar residential projects in coming years. 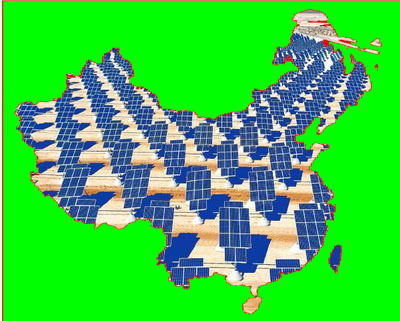 OO China Has the Most Solar PV Installed Globally with 43 GW of solar photovoltaic capacity.

OO Australia Taking Solar Power to the Next Level - Mostly put up in the past 10 years, residential solar panels have made Australia the country with the world's largest household uptake of solar panels. Almost 1.5 million homes are solar, creating the highest worldwide national average of 16%; the giant state of Queensland has the highest average, almost 30%. 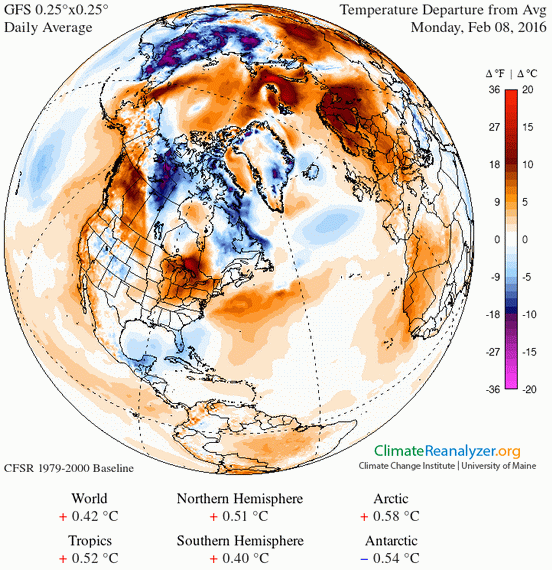 Looking above at recent temperature anomalies, much of the US and the waters surrounding it are experiencing warmer than normal temperatures: recent El Nino driven rains have barely changed long term water supplies, making further drought inevitable.

Every day is Earth Day, folks, as I was reminded by this Protea flower I photographed one spring in South Africa. Making the U.S. a global clean energy leader will ensure a heck of a lot more jobs, and a clean, safe future. If you'd like to join the increasing numbers of people who want to TELL Congress that they will vote for clean energy candidates you can do so here. It's our way of letting Congress know there's a strong clean energy voting bloc out there. For more detailed summaries of the above and other climate change items, audio podcasts and texts are freely available. 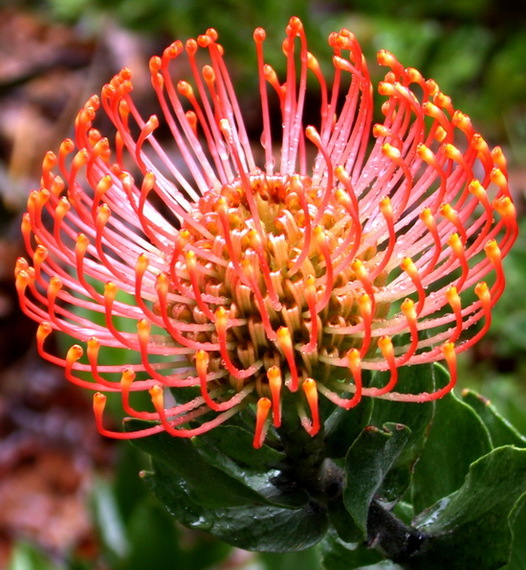