If melting ice caps trigger rapid sea level rise, the strain that the edges of continents could experience might set off underwater landslides, new research suggests.

Submarine landslides happen on every continental margin, the underwater parts of continental plates bordering oceanic plates. These underwater avalanches, which can happen when underwater slopes get hit by earthquakes or otherwise have too much weight loaded onto them, can generate dangerous tsunamis.

A staggering half of all the Earth moved by submarine landslides over the past 125,000 years apparently happened between 8,000 and 15,000 years ago. "This time period coincides with the period of most rapid sea level rise following the end of the last ice age," said study co-author Daniel Brothers, a geophysicist at the U.S. Geological Survey's Coastal and Marine Science Center in Woods Hole, Mass. [10 Tsunamis That Changed History] 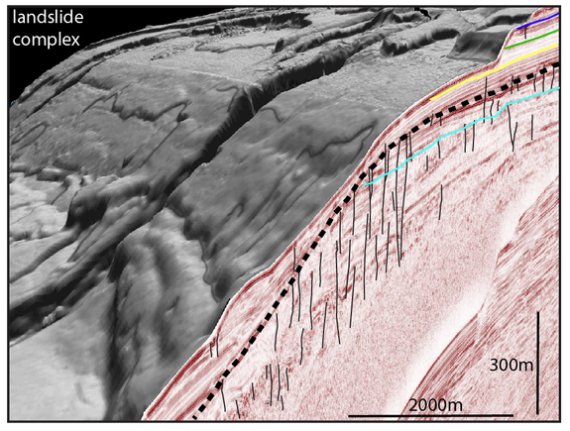 Since these prehistoric disasters coincided with changes in climate, previous research suggested natural global warming might have been their cause, but what exactly the link might be was unclear. To learn more, Brothers and his colleagues generated 3D computer models of the effects of 395 feet (120 meters) of sea level rise on the continental margins off North Carolina and Brazil's Amazon coast.

The rapid sea level rise that happened between 8,000 and 15,000 years ago was due to melting ice caps, which were originally hundreds to thousands of feet high. These glaciers placed weight on the planet's rocky surface, building stress on faults in the Earth for millennia. The later thinning and retreat of these glaciers raised sea levels by about 395 feet, increasing the amount of pressure these critically stressed faults experienced across their entire length by an amount similar to that of the average human bite. This would be enough pressure to set off the faults, triggering underwater landslides, the models showed.

The scientists added that such underwater landslides could have helped release vast quantities of methane, a greenhouse gas, from the seabed. This could have, in turn, driven profound changes in the oceans and the atmosphere, such as the warming of the climate.

Brothers and his colleagues Karen Luttrell and Jason Chaytor detailed their findings online July 22 in the journal Geology.