"The evidence speaks for itself ... with all the science surrounding climate change, it's not a secret and certainly not a debate. It is, most importantly, a time for action. We've been stalling for too long," said Marcia McNutt, the incoming president of the National Academy of Sciences and the first woman to lead the nation's premiere science organization that provides advice to the Federal Government.

Dr. McNutt was speaking before a crowd of scientists and South Florida residents at the third "Sea Secrets" lecture in the 2016 series, held last week at the renowned Rosenstiel School of Marine and Atmospheric Science at the University of Miami.

"We have been recording the data for decades. The evidence we now see in our oceans makes the dangers very clear. The impact is right in front of our very eyes, front and center for everyone to see. There is no denying the evidence," she went on to explain. 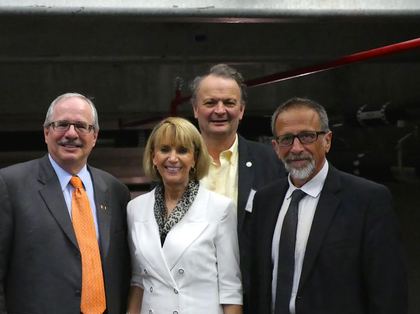 A geophysicist by training, Dr. McNutt knows her science. For the past three years, she has served as the 19th editor-in-chief of Science magazine, before that having been the head of the U.S. Geological Survey where she played a key role in the Federal government's response to the Deepwater Horizon oil spill in the Gulf of Mexico. Earlier, she was the head of the Monterey Bay Aquarium Research Institute and was the Griswold Professor of Geophysics at the Massachusetts Institute of Technology. She holds four honorary doctorates and, among other awards, is a recipient of the Maurice Ewing Medal (2007) for her contributions to deep-sea exploration.

In her remarks, Dr. McNutt noted five key factors underlying the dramatic changes we are seeing in the oceans:

The "bottom line," as Dr. McNutt sees it, is three-fold:

"First, regardless of where we live, our lives are affected by climate change. The evidence makes that clear and now helps us even better understand the impact.

"Second, we have been stalling climate change mitigation. In other words, we have been reluctant and slow to do anything about it.

"And third, we have not yet been serious about adaptation. In other words, we haven't taken action to change the ways we live, how we build homes and buildings along the ocean and how we get ready for the inevitable."

Dr. McNutt went on to make the point that extreme weather events pose a danger to homes and land, not simply during the event itself, but because of their longer term impact: the water does not always recede if shorelines erode from tidal surges and high water.

She punctuated her comments by saying that people need to accept that "organized retreat" may be essential and, in the future, people may just have to move out and live elsewhere. 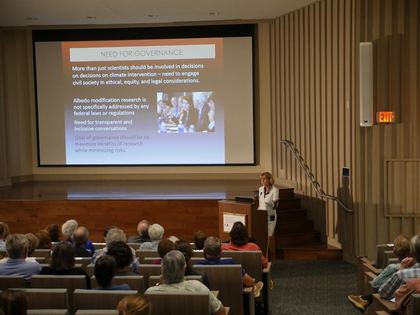 For many of those in the audience last week who are residents of Miami and South Florida, the impact of climate change is close to home and something they face every day.

"This is critical for us," notes Sheryl Gold, one of the sponsors of the "Sea Secrets" series and a tireless advocate of strong steps to address the impact of climate change:

"The threats are real. Climate change and its dangers are in our backyards, not only along our ocean beaches. Rising seas, coral destruction, street flooding and contamination of our waterways - lakes, bays, rivers, estuaries, of course the ocean - and ground water affect all of us. If we don't take personal and collective action, there will come a day when the water level rises and Miami is no longer. Even before then, there will be a day when fresh water is one of our scarcest resources."

The Rosenstiel School of Marine and Atmospheric Science hosts the "Sea Secrets" lecture series in order to bring critical scientific issues to the attention of interested individuals and the academic community.

In the finest tradition of leadership in academia and the sciences, this kind of outreach, as Dean Roni Avissar, Ph.D. explains, is a critical part of the Rosenstiel mission to help improve lives through education and research in the applied sciences.

The fifth lecture in the series is set for April 14, 2016, entitled "Climate Change: The Hand That Rocked the Civilizations!" With a different take on the impact of climate change, the upcoming lecture will look at the rise and fall of early civilizations. Arash Sharifi, Ph.D. candidate in marine geology and geosciences at Rosenstiel, will share research on how natural water sources and their availability may have been the critical element that changed the course of history.

With a goal to share scientific thinking well beyond the University, the lecture series is made possible by many whose passion is to protect the environment and preserve our oceans: The Shepard Broad Foundation, Sheryl Gold, William J. Gallwey, III, Southern Wine & Spirits and WPBT PBS Miami.