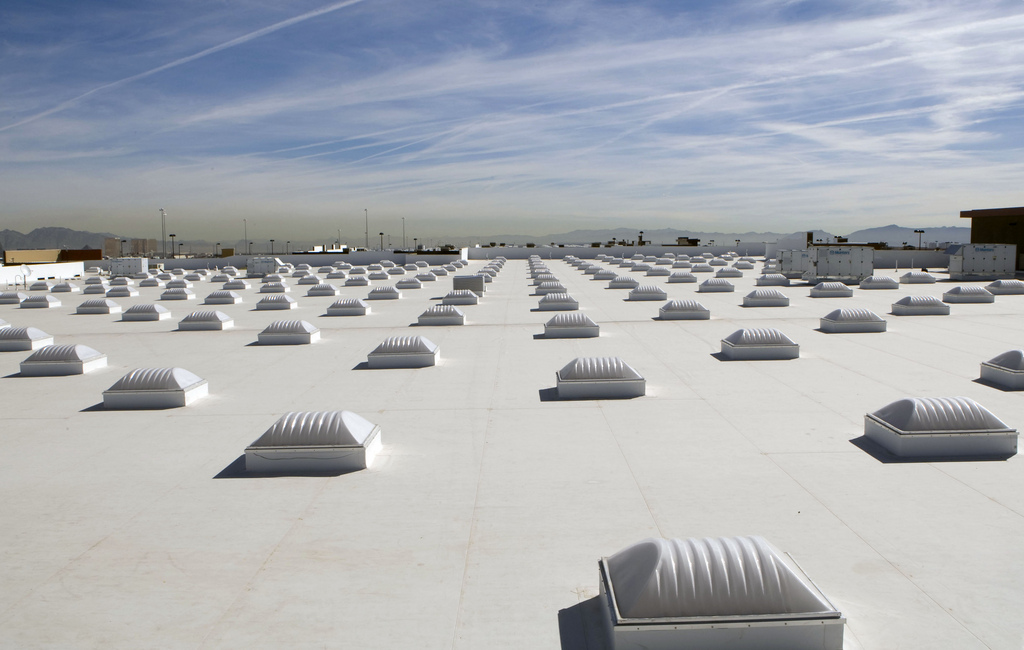 This Las Vegas Walmart's roof is white (and studded with skylights) to reduce energy use. But is it really a cool roof? (Photograph courtesy of Walmart/Flickr)

White roofs may not be so green.

Sometimes It Gets Complicated

Recently in these posts, I've argued that in some cases, as in discerning the long-term global temperature trend (or employing smart regulation when it comes to deepwater drilling), a little common sense will suffice.

But sometimes the climate system can surprise you -- what seems like common sense may prove to be not so commonsensical. In a paper published in the Journal of Climate authors Mark Z. Jacobson and John Ten Hoeve of Stanford University argue that the climate impact of white roofs is a case in point.

Be a Painter, Paint It White

When faced with a tough problem, it's often a good idea to start with the low-hanging fruit -- the simple, easy stuff that gets the ball rolling.

In the case of global warming, white roofs looked to be the low-hanging no-brainer. Things are getting too hot? Simple, paint the roofs white so that they reflect more sunlight, and presto chango, things cool down a bit.

I thought so, and so did our very own Nobel prize-winning secretary of energy, Steve Chu, who has publicly urged a grassroots paint-roofs-white movement. (See video.)

Easy, But Not Such a Good Idea, Say Authors Jacobson and Ten Hoeve

The net effect of making roofs white depends on which of these two competing processes dominates -- cooling by reflection or heating by cloud suppression? To find out which is more important, Jacobson and Ten Hoeve carried out a series of climate simulations using a model called GATOR-GCMOM, a global-regional "Gas, Aerosol, Transport, Radiation, General Circulation, Mesoscale, and Ocean Model that attempts to simulate climate, weather, and air pollution on all scales." Impressive. If I had my druthers I wouldn't call it GATOR-GCMOM, I'd call it OMOE -- Our Model of Everything.

One thing the authors didn't assess is the impact of white roofs on energy use and the concomitant fossil fuel emissions. By cooling temperatures in the summer, white roofs should lessen the need for air conditioning, which in turn reduces electricity use, greenhouse gas emissions, and warming. However, during the winter, white roofs increase the demand for heating, which in turn leads to more emissions and more warming.

While Jacobson and Ten Hoeve did not look at that aspect of the problem, Oleson et al did in a paper published in the journal Geophysical Research Letters in February last year. They found that on average over the globe, wintertime energy demand trumped warm weather cooling gains, implying that this aspect would only add to the net warming effect from white roofs. When I covered this paper last year, I noted that there was a way around this problem -- temperature-sensitive, color-changing roofing material. And wouldn't you know it, a team of students at MIT was already developing such a material. One could also only paint roofs white in warmer areas where heating needs are small.

Models of everything can be impressive things, and kudos to the scientists who have developed them, but they are in the end just models and models that are attempting to simulate a very complex array of processes. For that reason, I wouldn't take Jacobson and Ten Hoeve's result that white roofs cause warming to the bank just yet. And the authors agree and in fact recommend further work.

But their calculations do illustrate very nicely that using white roofs to cool the climate might actually turn out to be a "no-brainer" in a somewhat different sense. And there's another point. There are folks out there who are suggesting that we handle the global warming problem through geoengineering -- consciously altering the environment to counter warming rather than, or in addition to, lowering greenhouse gas emissions. The argument against this path is that one can never be sure what the actual effect of such actions might be -- because the climate is so complicated, geoengineering could have counterintuitive, even harmful effects. (See here, here, here, and here.)

Of all the geoengineering ideas, the one often cited as the simplest, most obvious one, the one we should get started on right away is painting roofs white -- after all how can that not help? How indeed.