After the second presidential debate, moderator Candy Crowley said, "Climate change -- I had that question, all you climate change people. We just -- you know, again, we knew that the economy was still the main thing, so you knew you kind of wanted to go with the economy." And the media's been talking about low information voters?

Now, along comes Sandy, who says to Candy, "Okay, then, take that!" See, Sandy doesn't get into debating these things, either. Now, let's see what Sandy's bill ends up being -- anyone taking bets? -- then let's sit down and talk some economy. In fact, there's an idea: Maybe a new American pastime could be organized 'disaster gambling,' with states collecting revenue as everyone bets on the tab for each new upcoming climate change disaster in their respective states?

Perhaps some still take issue with the suggestion that a superstorm like this is caused by our human-engendered climate change. But cigarette packages say things like, "cigarettes cause fatal lung disease." This, of course, is just shorthand, a monumental simplification, because in fact causation in complex systems is always a vastly complicated affair, and tobacco companies spent lots of money blowing smoke in the face of all that complexity: but the likelihood of getting lung disease is so greatly increased by smoking that eventually they gave up and we all agreed to go 'low-info' by just saying cigarettes cause fatal lung disease. As I'll demonstrate, in much the same way, we might as well keep it simple and just say this superstorm is caused by our human-made climate change.

I've been writing on the Arctic crisis, and in a recent long list of immediate physical changes from loss of summer Arctic sea ice, I listed (as #12) its potential impacts on weather at lower latitudes. It so happens that it is just at this time of year that this has the clearest line of causation, since lots of heat and moisture enter the atmosphere from the open waters that had been ice covered, and latent heat is released in the refreezing process, which progresses rapidly as the Arctic cools down right around now. Dr. Jennifer Francis of Rutgers University, whose work was featured on the front page of the New York Times earlier this year, wrote in a recent paper (with Stephen Vavrus), "This warming is clearly observable during autumn in near-surface air temperature anomalies in proximity to the areas of ice loss."

And this in turn becomes very important for large-scale atmospheric circulation. For example, Dr. Francis has used the metaphor of a river going down a steep incline, which runs straight, versus a river that runs along a flat plain, which tends to meander. Likewise the jet stream, since the normal energy gradient between Arctic air and that of lower latitudes has become more relaxed in tandem with ice extent drops, is tending to meander more, and hence move more slowly as well. As the Francis paper said, "Previous studies support this idea: weaker zonal-mean, upper-level wind* is associated with increased atmospheric blocking events in the northern hemisphere." [*she means high west-east moving winds]

Let's look back again at this superstorm, and you'll see that important features of what you're about to experience stem from the Arctic situation I've been discussing. First, Arctic air is coming down to hook up with Sandy from the dip of the jet stream. Francis writes (from personal communication),

"The huge ice loss this summer, and subsequent enhanced warming of the Arctic (see attached figure), may be playing an important role in the evolution of Sandy by enhancing the amplitude of waves in the jet stream." 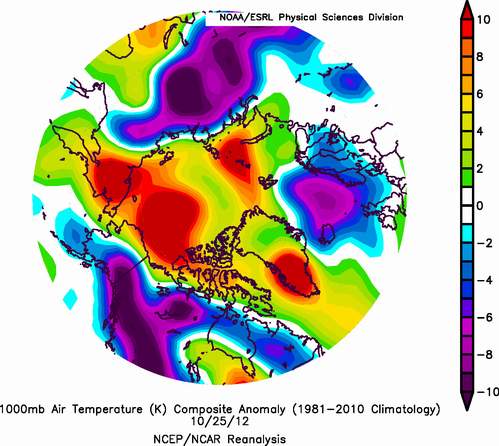 At the same time, high pressure over Greenland, and the extremely negative state of the North Atlantic Oscillation, is creating a blocking event that is impacting the path of Sandy herself, sending her back west over the U.S. Again, Dr. Francis (in personal communication):

"In this case, the effects could be causing strengthening of the block, elongating the block northward, and/or increasing its duration -- and this block is what's driving Sandy on such an unusual track westward into the mid-Atlantic coast."

Now, let's add to all that the underlying and obvious thing -- that Sandy is only surviving as a hurricane so far north, almost in November, because there are record high sea surface temperatures off the U.S. East coast right now. And while the third storm component, the one coming in from the west, might seem less remarkable, that is also something that generally becomes more probable with global warming, as our atmosphere can hold more water vapor as it warms and the evaporation rate is also increased by the warming. Thus, all major components of this superstorm show the signature of human-induced climate change to varying degrees, and without global warming the chance of the three occurring together like this would have a probability of about zero. So, let's make it simple, and just say climate change caused this storm.

I'm in New York City, just as much in the path of Sandy as so many others are, but come on, you do just have to sit back and love it, appreciate the full irony of it all, with Sandy striking right at those most sensitive loins of our American democracy, threatening to interrupt our sacred electoral process, after that process blocked climate change out, and now an atmospheric blocking pattern, created by that very climate change, pushes Sandy back on us. In a time when climate silence trumps climate science, when the candidates seem terrified to mention the 'C-word,' Candy, I hope you enjoy meeting Sandy. Maybe if the election gets as messed up as 2000, you three can even find time to meet up again, and go over a little issue you couldn't quite find time to fit in before?