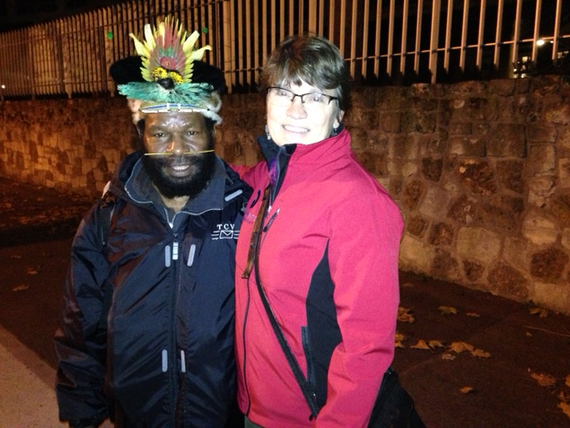 On Saturday I attended a workshop centered on Bangladesh, which included voices from the ground level, and information from a study that was done with farmers. Farmers are having great difficulties growing crops in Bangladesh today, because agriculture has already changed in many ways. A number of changes in the climate have reinforced each other in different ecosystems and development sectors to intensify the impacts that Bangladesh is already experiencing. These impacts include sea level rise, increased cyclones, increased salinity of the soil, floods, droughts, landslides, and erratic rainfall, to name a few. Farmers in Bangladesh don't necessarily know that increased CO2 levels are creating climate change, but they do know that it's becoming hard to grow the things they need to eat, and that weather, climate, soil, and rains are not what they used to be. They don't know that people on the other side of the world are living lifestyles that put lots of carbon into the air, at their expense.

Today I heard eyewitness accounts from Indigenous Peoples in the Marshall Islands, Papua New-Guinea, and Indonesia, who described similar situations in their homelands. The three panelists shared moving accounts of lands threatened by sea-level rise and loss of forests.

Mina Setra, Deputy Secretary General of AMAN (Indigenous Peoples' Alliance of the Archipelago) in Indonesia, has been coming to COPs since 2007 to have her voice heard.

Kathy Jetnil-Kijiner, a poet and activist from the Marshall Islands, shared her story of Marshall Islanders first being displaced due to nuclear testing, and now being threatened by sea level rise. This history of neglect and displacement has me afraid that these voices will not be valued on the global level. Kathy told us urgently that even the goal of limiting global warming to 2 degrees Celsius will put the Marshall Islands under water, and called for the COP21 negotiators to embrace a goal of 1.5 degrees of warming. She is also a spoken word poet; her words and video speak eloquently of the challenges facing the Marshall Islands, and courageously of how we can surmount obstacles by coming together as one global community.

Mundiya Kepenga, a Papuan traditional Leader from Papua New-Guinea, spoke through a translator: "I have come here to be a bridge between my world and your world. There is no more rain. Our springs are dry. Water and food are really a problem for us." He also spoke about the destruction of the forest, which is very important for his people. For them, trees are like family:

Minneapolis-based nonprofit, Climate Generation: A Will Steger Legacy, is leading a delegation of 10 Education Ambassadors to COP21 through their Window Into Paris program, December 5-11. These 10 teachers - representing diverse subject areas, grade levels, and school communities from Minnesota, Denver, Atlanta, upstate New York, and western North Carolina - are connecting their students to climate policy in action, helping to build both climate literacy and the relevance of this issue in their students' lives. Follow their stories via their blogs and daily digests.