"We are both guardians of the forest." -Mundiya Kepenga's statement to Robert Redford at today's UNESCO event entitled "An Afternoon with Robert Redford: Storytelling for Global Action." 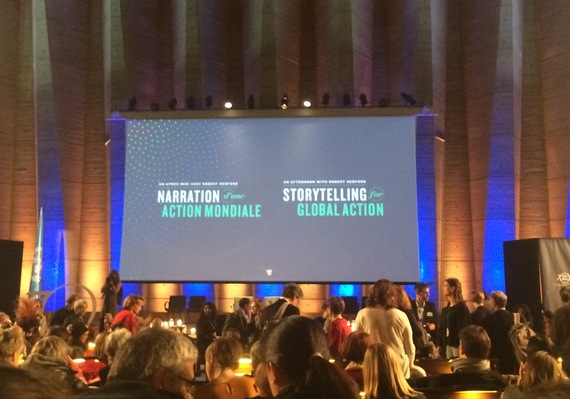 Today, I was privileged to listen to three guardians.

Mundiya Kepenga is a Papuan traditional Leader from Papua New Guinea who, as he states, testifies about climate change with his eyes. He is a witness to climate change, which he is experiencing through the loss of his people's drinking water and the disappearance of native species. He is working to preserve the forests of his area from loggers in the face of this broader threat. Mundiya is the guardian of his forests and thereby the guardian of his people, their history and their future.

Mina Setra is the guardian of the Indigenous People in Indonesia. Though small in stature, she is strong in conviction. Mina is the Deputy Secretary General of AMAN (Indigenous Peoples' Alliance of the Archipelago) in Indonesia. She is working to connect the Indigenous People of Indonesia through the use of text messaging and visuals on TV, which she uses to reach people across the Archipelago's 17,508 islands. By connecting these disperse communities, she believes there is power to preserve their heritage. Today, tomorrow, and the rest of the week, Mina is one of the guardians working to preserve the language that recognizes Indigenous rights in the COP21 agreement. It is no small feat to be a guardian.

Kathy Jetnil-Kijiner is the guardian of the Marshall Islands. She is a poet, a spoken work artist, and an activist. She spoke at the United Nations Climate Summit last year and performed a beautiful piece that personalizes her climate fears for the future. Please watch her video. It is spectacular.

Merriam-Webster defines "guardian" as: "someone or something that watches or protects something."

For whom or what are you a guardian? I am striving to be a guardian for my children and students by working for a secure climate future. By teaching about climate change and raising awareness, I hope to be instilling knowledge and a desire for action in the middle schoolers of today. I feel gratitude towards UNESCO and the Natural Resources Defense Council (NRDC), for organizing this panel of storytellers, who were introduced by Robert Redford. Bob, as he was referred to, states that "the most sacred thing we have is choice." Please make the choice to be a guardian of our climate future.

Minneapolis-based nonprofit, Climate Generation: A Will Steger Legacy, is leading a delegation of 10 Education Ambassadors to COP21 through their Window Into Paris program, December 5-11. These 10 teachers - representing diverse subject areas, grade levels, and school communities from Minnesota, Denver, Atlanta, upstate New York, and western North Carolina - are connecting their students to climate policy in action, helping to build both climate literacy and the relevance of this issue in their students' lives. Follow their stories via their blogs and daily digests.