The United Nations climate change convention is 20 years old this month. As we see from the just-completed climate talks in Bonn, Germany, we still haven't solved the problem nor even agreed how to solve it. Meanwhile, the impacts of climate change become more apparent, hitting the poorest and most vulnerable the hardest. 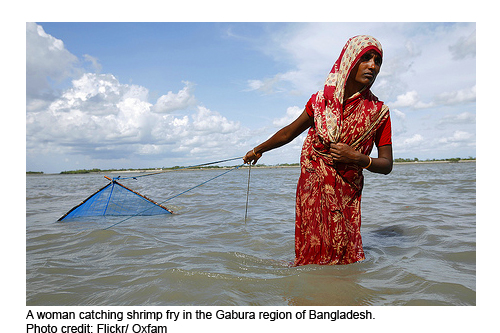 Within this statement lies a deep injustice: those most affected by climate change did least to cause the problem. We need to put a human face on climate change. In the Bay of Bengal, in Bangladesh, sea-level rise, the increased incidence of cyclones, and higher temperatures are causing freshwater ponds to become salty. These are major challenges for families who rely on water for drinking, washing, irrigation and aquaculture. The impacts are so serious that they threaten the very ability of families -- who produce virtually no greenhouse gases -- to continue to live there.

In the Andean mountains of Peru, climate change is contributing to melting glaciers and affecting seasonal precipitation patterns. This, in turn, is taking its toll on farmers, ranchers and communities, disrupting water supplies for crops, irrigation and household use. While some villagers are beginning to adapt to these changes, the stress is severe for already vulnerable communities, many of whom face water shortages even in the best of times.

These are just two of the many stories repeated in communities around the globe that should compel policymakers to act. But this urgency is not reflected in the negotiating rooms or in the seats of power around the world.

We need a new way of talking about climate change -- one that motivates people to act, to demand more of their political leaders, and to hold the international community accountable. The time has come for a new narrative, informed by human rights, ethics and values, to inject urgency and ambition into the climate change negotiations. This is a climate justice narrative: upholding human rights, safeguarding the most vulnerable, and shaping equitable responses to climate change.

Climate change is undermining internationally recognized human rights -- including rights to food, water, health and development -- and exacerbating existing inequalities and injustice. Climate change is one of the greatest threats to human development worldwide, and we need to create new opportunities that benefit all people, rich and poor, north and south, in cities and in rural communities.

Our two organizations -- the Mary Robinson Foundation - Climate Justice and the World Resources Institute -- are embarking on a "Climate Justice Dialogue" to bring the issues of equity and justice into the core of the climate conversation. We want to create a new narrative based on people's rights, their needs and their vision of the future, to create the momentum necessary to get the nations of the world to enter into a new climate change agreement in 2015.

Our goal is a climate deal that has the necessary ambition to safeguard people, planet and prosperity while sharing the responsibility of action equitably. We will include perspectives from around the world in this dialogue, ensuring that the voices of the vulnerable are heard in the corridors of power and reflected in a new climate agreement.

The time has come for a new approach to climate change -- one that reinforces scientific evidence with human stories. Until we collectively feel the grave injustice of climate change and create strong constituencies demanding an effective and equitable response to climate change, the urgency needed will continue to be lacking.

People around the globe -- from villages of Bangladesh to the mountains of the Andes and from the farms of Africa to the low-lying islands of the Pacific -- are already coping with the impacts of climate change. These vulnerable communities cannot afford to wait as others stall and bicker. Climate justice can help to unlock the stumbling blocks in the climate negations and facilitate an equitable outcome that will ultimately reduce the risks of climate change, protect the vulnerable, and share the benefits of a new low-carbon future.