Part I of II

The People's Climate March was an amazing and valuable achievement.

The People's Climate March was a powerful exercise in a nearly powerless strategy.

Who, among those with an inkling of the climate disaster already upon millions of beings on the planet, could not be heartened by the numbers, commitment, creativity, energy, joy, and diversity involved in Sunday's protests? The movement showed itself to be... a movement. 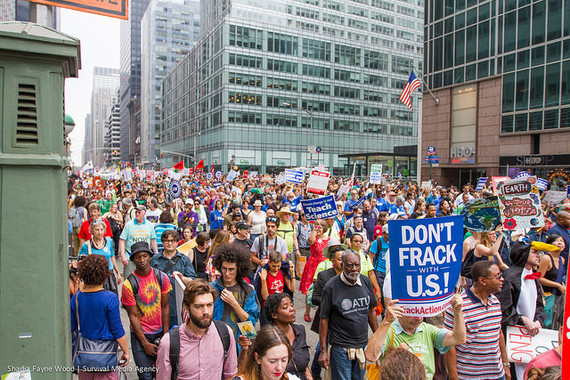 And yet which of these quotations rings more true?

350.org's emailed "Official reportback from the UN meeting and People's Climate March" outlines a strategy of continuing to let those who have run ours and the world's affairs for decades know how we feel, as if that matters:

The next important UN gatherings will be in Lima in December 2014 and in Paris in December 2015. Our hope is to use people-power to ratchet up the pressure on these talks, to channel the voices of millions around the world to increase the accountability and ambition of world leaders in these negotiations.

If they are serious at all about doing their democratic and moral duty, they will need to be ambitious indeed -- committing to transitioning from fossil fuels to clean energy which benefits everyone, and quickly.

And here is Chris Hedge's assessment, in a Truthdig piece preceding the march:

One statement accepts the myth that our wishes have real weight against the power of the fossil fuel industry, and one faces the truth. Here are a few signposts, from different historical periods.

The fossil-fuel industry's dominance over politics is not new. In 1961 Columbia Professor Robert Engler's The Politics of Oil came out. As The Washington Post wrote of that and his followup work in a 2007 obituary, "Combing through government and company records, his work illuminated the special tax, pricing and political requests of oil companies and their effect on national and foreign policy... Dr. Engler assailed what he called the lack of public accountability among the petroleum giants, which he likened to a 'private government.'" "Government policy on oil," Engler wrote, "has become indistinguishable from the private policies of oil." (Politics of Oil, p. 419.) A contemporary reviewer complained that many of Engler's facts were nothing new.

In 1962 Little, Brown published Harry Caudill's Night Comes to the Cumberlands. It was a devastating portrait of what the coal industry had done and was doing to the land, people, and politics of Appalachia.

Together, these books made clear that, at the state and federal levels, fossil fuel companies had for decades used government for their own purposes.

Al Gore's Silence as the U.S. Sought to Torpedo Kyoto

Fast forward to 1996-1997. Bill Clinton was in the White House. Al Gore had been known as an environmentalist before becoming V.P. Talks were being held to establish the Kyoto Protocol on global warming, because in 1985 "scientists at [the] Villach conference in Austria reach[ed] consensus that global warming is happening" and action on emissions was needed. (Andy Kroll, "The Long and Warming Road," Mother Jones, Nov./Dec., 2009.) Those of us who were following media such as Mother Jones and Democracy Now! knew that the U.S. role was obstructionist, trying to water down every proposal and using tactics that seemed aimed at derailing the talks altogether.

Rather than rally domestic support for the treaty eventually created, Clinton never submitted it to the Senate, saying it would not be ratified. (An allusion to this history is in a 2012 CommonDreams article on the Doha climate talks, "Kyoto all Over Again? US Obstructive Force at Climate Talks.") In a stark demonstration of the limits of what holders of high office in corporate-owned government can do, Al Gore was silent during the entire episode. When he ran for President in 2000, his party's platform finally mentioned climate change, but it has never called for the U.S. to join the treaty group.

"Democracy" in Action: "Change We Can Believe In"

Fast-forward again. As I and others wrote in 2012, after four years in office, our "Change-We-Can-Believe-In" President had broken nearly every promise that had mobilized his supporters. This was predictable. While he had been elected in 2008 after receiving the record amounts of small donations he publicized, the campaign also broke the records for corporate contributions. It publicly rejected donations from lobbyists while quietly taking them from their spouses and attorneys.

Amy Goodman recently played a clip of Obama speaking in 2012 "in Cushing, Oklahoma, to announce his support for TransCanada to build the southern leg of its Keystone oil pipeline."

Over the last three years, I've directed my administration to open up millions of acres for gas and oil exploration across 23 different states. We're opening up more than 75 percent of our potential oil resources offshore. We've quadrupled the number of operating rigs to a record high. We've added enough new oil and gas pipeline to encircle the Earth and then some. So, we are drilling all over the place, right now. . . . [W]e're actually producing so much oil and gas . . . that we don't have enough pipeline capacity to transport all of it to where it needs to go.

Thus, as Naomi Klein cogently explained on the same broadcast, "Governments started negotiating towards emission reduction in 1990. . . . And since that time, emissions have gone up by 61 percent globally. So, it's not just that we're not solving the problem, it's that we're making it a lot worse." Her interviewer played a clip of a high-profile climate denier, lauding the President at a 2011 U.N. conference: "[A]s skeptics, we tip our hat to President Obama in helping crush and continue to defeat the United Nations process. Obama has been a great friend of global warming skeptics at these conferences." And today the Administration is promoting fracking, the polluting, geological, and carbon-emissions-producing effects we hear more about every day, as a clean-energy solution. He still will not pull the plug on Keystone XL.

Playing on a Field Where We Lose

In virtually every policy area, Obama has abandoned the 99%. This is because corporate control of government is by no means limited to energy policy. As a recent, peer-reviewed Princeton study of 1,779 policy decisions made between 1981 and 2002 concludes, "economic elites and organized groups representing business interests have substantial independent impacts on U.S. government policy while mass-based interest groups and average citizens have little or no independent influence." Translation: the 0.01 percent get what they want; we don't.

The corporate media are in the same game. Network television nearly ignored Sunday's and Monday's events. Outside New York, newspapers were not much better: The Boston Globe covered the march on page two, and The Washington Post gave it a buried paragraph in another climate-related story.

We are dealing with a systemic problem, one that displays historical continuity and is but one manifestation of a government bought and paid for with corporate money. Historically, major concessions to the majority have come only when elite control was threatened with serious social unrest and loss of legitimacy. As labor, peace, and anti-poverty activists know well, the gains erode terribly when the pressure lessens. Even the victories of the Civil Right/Black Power movements have been partially offset by The New Jim Crow and other developments.

In Part II we will look at what all this means for an effective strategy to reverse the emissions-promoting momentum of our economy and politics, and, in particular, whether the answer is to "keep the pressure on" to get these folks to do the right thing, despite their being beholden to those who want them to do what they've always done.