Most of the commentary on the May 21st 'Rapture Fail' consisted of gleeful mockery, with a dose of sympathy for the poor misguided, fools who quit their jobs and spent their life savings in anticipation of Judgment Day.

But for some reason, I just I couldn't bring myself to participate in the feeding frenzy.

I couldn't quite put my finger on why until I read this comment by @SteveSilberman of Wired magazine:

I suddenly realized it all sounded a bit too familiar, like a B movie caricature of what could, in fact, be a real Armageddon in the making -- climate change. The parallels were obvious.

The worst case climate scenarios could certainly spell the end of human civilization as we know it. Granted, the climate version will be gradual in comparison with the sudden-doom biblical version, and climate impacts will be equally devastating for believers and nonbelievers alike. But you've got to hand it to the rapture crowd -- they do a great job of articulating a happy ending for those who see the light and change their ways.

At the TckTckTck website, we try to paint a future vision for a "climate rapture" of sorts by demonstrating how a renewable energy future will create jobs, improve health, stave off the worst impacts of climate change and pave the way for sustainable development around the world. Though our version of the rapture is slightly less cinematic, it's a whole lot more democratic. The climate rapture has a win-win ending. Everyone benefits, not just the chosen ones.

The climate community also engages in apocalyptic prophecy, though in our case it's foretold by scientists who carefully follow the scientific method and are bound to its exacting standards through a large community of peer reviewers. In this form of prophecy, hyperbole is all but abolished. Still, many worry that toe-curling predictions (like those found in a new forecast by NOAA on the 2011 Atlantic hurricane season) will come back to bite us should they not pan out precisely as anticipated. While it would not make a whit of difference to the validity of the scientific consensus on climate change, it would play right into the hands of the denial machine's campaign to sow doubt in the public mind. 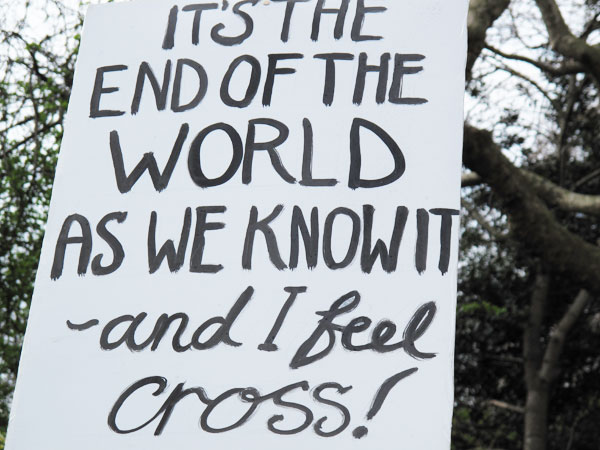 I do have some sympathy for the much-ridiculed rapturists because I (and every climate activist worth his or her salt) have born the brunt of skeptic attacks. It's not fun being called an "alarmist nutball," and often we are accused of pursuing something akin to religious zealotry. It's easy to laugh it off, but we should remember that just because the climate case is based on overwhelming scientific evidence doesn't mean our beliefs are any more powerful than the beliefs born of religious (or other) conviction.

Belief -- not only in the frightening parts, but also in our ability to turn things around -- is key to the future of the climate change movement. There's a big difference between knowing that a bunch of facts and figures are true, and having a true inner conviction that motivates you to take radical action. I experienced this in my own personal life, battling a life-threatening illness through unorthodox means. I won that battle, much to the amazement of my fact-bound doctors, who had doubted such a thing was possible. Belief is a powerful motivator. In my case, it literally saved my life. And my belief that there is still time to save the climate is what drives my passion to fight for it.

Fortunately, there's no reason anyone needs to choose between science and faith when it comes to climate change. Many religious communities have embraced the scientific consensus on climate and are working for climate justice. No less an authority than the Vatican is on board.

We seem to be at a turning point. Climate change is happening, despite remaining uncertainties about the exact timing and nature of those impacts. Now is the time to take that leap of faith, to believe not only in our heads, but in our hearts, that catastrophe can be avoided if we act now.

So the next time you find yourself talking to a "nutball," remember that he probably thinks the same about you. You'll be far more likely to convince him to think again if you listen to what he's saying, consider the beliefs and values which underlie his convictions and look for areas of commonality. Try speaking to him on his own terms.

In the meantime, does anyone have suggestions for a word as seductive as "rapture" to describe the vision of a sustainable, heavenly future here on earth?