Despite the apparent inability of many of our current policy makers to accept the scientific reality of climate change, the science is not new. Fifty-nine years ago, on October 28, 1956, the New York Times ran a story in their Science in Review section entitled "Warmer climate on the earth may be due to more carbon dioxide in the air." The full text of that article is reprinted below and is available from the New York Times archive, here.

A regular false claim made by some politicians and climate deniers is that most climate scientists used to say that carbon pollution would lead to an ice age. This myth has been regularly debunked, including here, but it continues to surface. Indeed, Senator Ted Cruz repeated it yesterday in an NPR interview, along with many other fundamental scientific errors. But as this old article shows, it has long been understood that the real threat was global warming or the greenhouse effect, together with broader fundamental climatic changes. As the 1956 story notes: "As the amount of carbon dioxide increases, the earth's heat is more effectively trapped, so that the temperature rises." And in a somewhat more poetic and colorful summary, "a rise in the average temperature of only 4° C would convert the polar regions into tropical deserts and jungles, with tigers roaming about and gaudy parrots squawking in the trees."

Today, climate science is far advanced from these early days. Our understanding of the complexities of climate dynamics, human interference with the atmosphere and the risks of human-caused climate change is more complete, sophisticated and accurate than six decades ago when this article was written. But even then, the fundamental science was correct: our emissions of carbon dioxide and other heat-trapping gases will warm the planet and change the climate, and the closing observation of this article is as true today as it was then:

"Coal and oil are still plentiful and cheap in many parts of the world, and there's every reason to believe that both will be consumed by industry as long as it pays to do so." 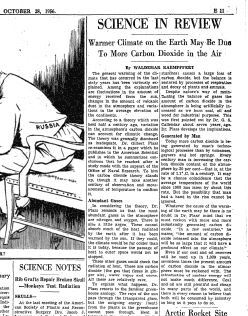 The New York Times, October 28, 1956
Science in review
Warmer climate on the earth may be due to more
carbon dioxide in the air
By Waldemar Kaempffert

According to a theory which was held half a century ago, variations in the atmosphere's carbon dioxide can account for climatic change. The theory was generally dismissed as inadequate. Dr. Gilbert Plass re-examines it in a paper which he publishes in the American Scientist and in which he summarizes conclusions that he reached after a study made with the support of the Office of Naval Research. To him the carbon dioxide theory stands up, though it may take another century of observation and measurement of temperature to confirm it.

In considering the theory, Dr. Plass reminds us that the most abundant gases in the atmosphere are nitrogen and oxygen. There is also a little argon. These cannot absorb much of the heat radiated by the earth after it has been warmed by the sun. If they could, the climate would be far colder than it is today, because the passage of heat to outer space would not be stopped.

Three other gases could check the radiation of heat. These are carbon dioxide (the gas that fizzes in ginger ale), water vapor and ozone. All these are relatively rare.

The atmosphere acts like the glass of a greenhouse. Solar radiation passes through to the earth readily enough, but the heat radiated by the earth is at least partly held back. That is why the earth's surface is relatively warm. Carbon dioxide, water vapor and ozone all check radiation of heat.

Of the three gases that check radiation, carbon dioxide is especially important even though the atmosphere contains only 0.03 percent of it by volume. As the amount of carbon dioxide increases, the earth's heat is more effectively trapped, so that the temperature rises.

Such a comparatively small fluctuation seems of no importance. Nevertheless it can bring about striking changes in climate. If the average temperature should fall only a few degrees centigrade, glaciers would cover a large part of the earth's surface. Similarly a rise in the average temperature of only 4° C would convert the polar regions into tropical deserts and jungles, with tigers roaming about and gaudy parrots squawking in the trees.

Dr. Plass examines the various factors that enter into what is called the "carbon dioxide balance," including the exchange of carbon dioxide between the oceans and the atmosphere. That balance must be preserved. Photosynthesis (the process whereby plants with the aid of sunlight assimilate carbon dioxide to produce sugars and starches) causes a large loss of carbon dioxide, but the balance is restored by processes of respiration and decay of plants and animals.

Despite nature's way of maintaining the balance of gases the amount of carbon dioxide in the atmosphere is being artificially increased as we burn coal, oil and wood for industrial purposes. This was first pointed out by Dr. G. S. Callendar about seven years ago. Dr. Plass develops the implications.

Today more carbon dioxide is being generated by man's technological processes than by volcanoes, geysers and hot springs. Every century man is increasing the carbon dioxide content of the atmosphere by 30 percent -- that is, at the rate of 1.1° C in a century. It may be chance coincidence that the average temperature of the world since 1900 has risen by about this rate. But the possibility that man had a hand in the rise cannot be ignored.

Whenever the cause of the warming of the earth may be there is no doubt in Dr. Plass' mind that we must reckon with more and more industrially generated carbon dioxide. "In a few centuries," he warns, "the amount of carbon dioxide released into the atmosphere will be so large that it will have a profound effect on our climate."

Even if our coal and oil reserves will be used up in 1,000 years, seventeen times the present amount of carbon dioxide in the atmosphere must be reckoned with. The introduction of nuclear energy will not make much difference. Coal and oil are still plentiful and cheap in many parts of the world, and there's every reason to believe that both will be consumed by industry as long as it pays to do so.