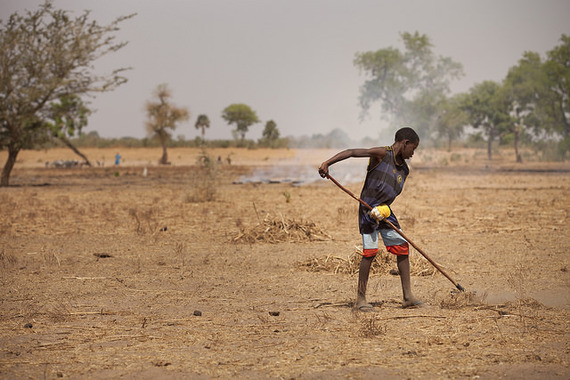 I grew up on a small farm in southeastern China in the 1960s. A scene out of The Good Earth, my family and I raised chickens and pigs and eked out rice and wheat on a small plot about half the size of a football field. Some years we were able to feed ourselves, but mostly we were poor and hungry.

Hunger, we now know, results not from food shortages but from policy failures. As people look to climate talks in Paris, my hope is that the negotiators will consider policy changes to the world's agricultural system to help us deal with rapidly changing climate as well as unacceptably high rates of hunger.

Every day, 800 million people, mostly in Africa and Asia, still go to bed hungry. And even more people lack adequate vitamins and minerals - a situation that takes a $2 trillion bite out of global GDP every year. At the same time, the projected impacts of climate change on future food supplies are alarming. Extreme droughts and rising temperatures are expected to cause global crop yields to continuously drop. For poor countries, losses could be as high as 50 percent by 2050. This means poor people will be forced to cut back on quantity and quality of their food, leading to severe health damages, spike in food prices and political instability.

The Green Revolution technologies in the 1950s and 1960s saved billions of lives, as they multiplied crop yields through irrigation, fertilizers, pesticides and high-yielding crop varieties. But they also prevented people from growing nutritious food like fruits and vegetables and degraded the environment. They forced women to work in slave-like conditions. My mother had to get up at four o'clock every morning to harvest multiple times a year.

So we need a new green revolution that can reduce agriculture's carbon footprint, empower women and generate a productive agricultural sector that can nourish everybody in the world. Building this kind of climate-smart agriculture requires smart policies by governments.

Climate change is already affecting food production, and farmers need help to anticipate the changes in temperature and precipitation that are certain to come. They need programs to help them choose crops and adopt farming technologies, making them more resilient to weather extremes. Dozens of these technologies - no-till farming, drought-resistant and heat-tolerant seeds, drip irrigation and water harvesting - already exist.

Agriculture is responsible for 30 percent of the greenhouse gases that are emitted, so it has a significant role to play in getting us closer to a carbon-neutral world. Unfortunately, many developing countries have done little to promote these technologies that can help reduce agriculture's contribution to greenhouse gas emissions.

Governments also continue to subsidize farmers to overuse valuable resources like water and energy. Most of these subsidies are used to produce more grains at the expense of nutritious crops like pulses, fruits and vegetables, which have grown progressively expensive. Such policies also contribute to the rise of obesity and overweight, afflicting one third of the world population. We need to reform policies so that they encourage farmers to produce as much nutrition as possible with the resources available.

Many countries are still wedded to backward trade policies that emphasize food self-sufficiency over nutrition. As farming conditions change, countries need to focus on what they grow best and import the rest. They need to reform trade policies to move food freely. National food self-sufficiency is not worthy of the name when it doesn't feed everyone adequately. And it may simply not be possible in the climate of the future.

Skeptics will argue that it's impossible to eliminate hunger. I know it's possible because I've seen countries make rapid gains on a massive scale with the right policies. For example, if China and Vietnam continue at their current rates of cutting hunger by enabling small farmers to produce and purchase nutritious food, they can eradicate hunger and boost nutrition in the next ten years.

By 2050, we can expect to have 9.6 billion mouths. We will be fortunate if we can keep global temperatures below the 2 degree Celsius threshold we have set for ourselves. But we won't be able to end hunger and cope with climate change if we cling to ineffective and outdated agricultural practices and policies.

Today, my family and I are well fed and prosperous. It was thanks to innovative policies that allowed small farmers to own land and pursue rural enterprises that I was able to escape hunger. Now let's do the same for humanity.