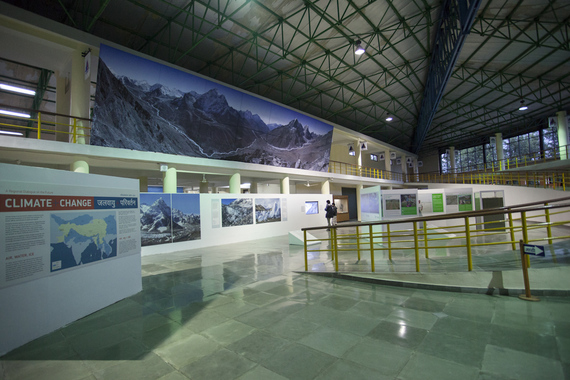 After a successful run in Kathmandu's Nepal Art Council between December 2013 and April 2014, the Climate+Change exhibition opened its second edition in Pokhara's International Mountain Museum on Saturday, September 27, World Tourism Day. The scenic lake-city is a major tourist destination and a starting point of several high-profile treks. Pokhara also attracts migrants and students from all over Nepal.

The exhibition is organized by ICIMOD and GlacierWorks. While most of the scientific and visual content comes from ICIMOD's research and knowledge bank, stunning high resolution photographs of glaciers and mountains are provided by David Breashears from GlacierWorks. The US Embassy in Nepal is one of the major sponsors. The exhibit was designed in partnership with New-York based Thinc Design. 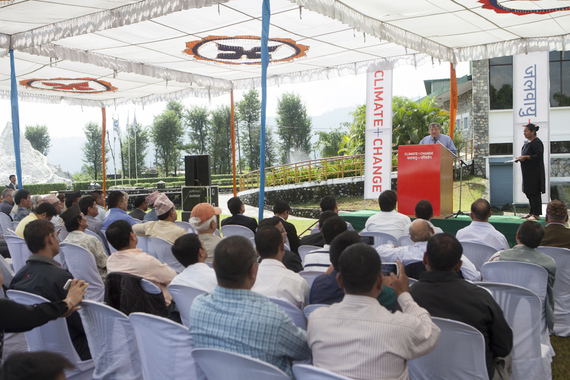 Several special guests jointly inaugurated the exhibition on Saturday. Education Secretary Mr. Bishwa Prakash Pandit, recognizing that the arts is an important medium for learning, encouraged school principals and teachers to take this opportunity for professional growth. American ambassador H.E. Mr. Peter W. Bodde closed his remarks with two points. He said that the Climate+Change exhibition will provide tools to students and teachers to engage in issues more deeply. And he quoted President Obama who spoke about Climate Change at the United Nations summit last week: "There's one issue that will define the contours of this century more dramatically than any other." 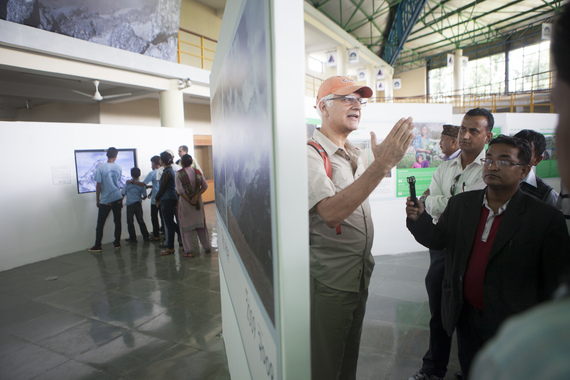 Nepali Times editor Mr. Kunda Dixit gave a guided tour to the local media. Later, he tweeted that the exhibit is "world class" and is a "new must-visit" in Pokhara. Sharareh Bajracharya from Srijanalaya, who leads the exhibition's educational program, gave a brief presentation to local artists and representatives from Pokhara's education sector. A talk program followed in the afternoon, which discussed interactions between tourism and climate change. The opening program also featured slam poetry from Word Warriors.

The diverse landscapes and community structures of the Hindu Kush Himalayan region are fragile and undergoing rapid changes due to global and local impacts. A major goal of the exhibition is to "start a regional dialogue on the future." Along with educational programs, regular panel discussions and issue-based public events are priorities for Program Coordinator Nayantara Gurung Kakshapati, who leads Photo.Circle, a local partner of the exhibition. 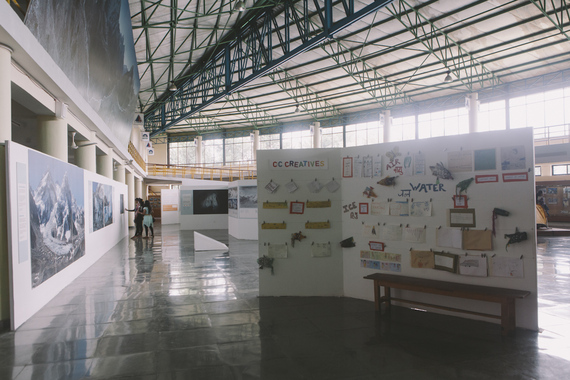 Srijanalaya, an organization that promotes arts education, has designed a four-part component for this year-long exhibition: In-depth explorations with schools, teacher/student seminars, art workshops and art residencies. The mission of the educational program is "to inspire teachers, administrators, students, museum educators, and arts educators to engage in project-based learning around Climate Change." Srijanalaya coordinated with the government's Curriculum Development Center while designing the educational program. Since the seventh grade science curriculum was revised this year in order to include units on environmental sustainability and degradation, the in-depth exploration component will work with seventh grade students in Pokhara Valley and the surrounding region.

Pokhara's Amar Singh school, which has four seventh grade sections with a class size of about sixty students each, will participate in the in-depth exploration during the initial phase. Educational guides will be trained to conduct the exploration, which is a multi-step program. During a pre-visit to the school, students will be given background information on the issues featured in the exhibition. A guided tour of the exhibition will follow; then a post-visit to the school in order to support teachers and administrators who will help students design hands-on projects based on local issues related to climate change.

The exhibition is curated around three thematic elements: Air, Water and Ice. Some of the topics covered are Black Carbon, Floods, Droughts, Glaciers and Rapid Urbanization.