Lately, my friends have been telling me that, when I'm dealing with something hard, I retreat into a little world of my own. I'm hard to reach there, they tell me. I'm not my usual self, they say; I'm broody instead of energetic, sad instead of smiley. I perceive the world as dull and gray.

They encourage me to get out, to explore beyond my house and office, to choose to see the world around me in all its glory, colorful and bright and full of possibility. Look out the window, they say. See the world blooming around you.

I listen, and I nod, and I go along. My friends mean well. They love me. They care. But inside? If I weren't Jewish and a mother of two teen girls, I think, I would gladly join a convent.

This week, as I moved slowly through my gray and isolated world - divorce, no matter how clear and correct a decision, is still a difficult one - I decided to give in to my friends' enthusiasm, to try to venture out, just once, just for one evening. Spring in Philadelphia waffles: One day it's cloudy, gloomy, spitting rain and sending freezing snow down onto the daffodils. The next it's sunny, warm, full of the smell of the budding magnolia trees. And Tuesday? It was one of those flowery days, when everyone who isn't getting divorced and isn't in her little cave of self-pity is out drinking iced coffee and walking her dog and laughing with friends.

So I compromised. As much as my French bulldog begged, I just couldn't slog through the park. The sun was too bright, I thought. The birds were too chirpy. But if I went to the theater, I could accomplish both what my friends wanted me to and what my soul craved: I'd get out, and I'd sit in the dark. Perfect.

Except that the national tour of The Sound of Music, on a brief stop at Philadelphia's Academy of Music as it worked its way across the country, wasn't in on the plan. Or, if it were - did my best friend call the house manager? - it was having none of it. Sit in the dark and mope? Nope, the conductor seemed to answer, with every wave of his baton. Sing along to classic music and skip and walk (albeit metaphorically) through the blooming hills? Yep. Required. You in Row D - get with the program. Start clapping while these here kids yodel. Now. 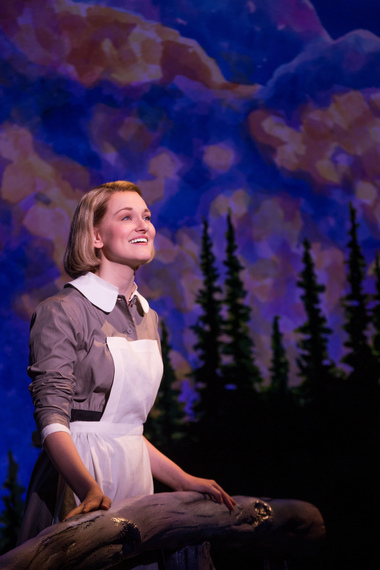 If you know the musical - and how is it possible that you don't? - you know that Maria starts out in a convent, a place she's sure she belongs. In this production, the convent is gray, and made of stone, and probably cold. The nuns wear the traditional black and white. And Maria begs the Mother Superior to let her stay inside the nunnery's walls, away from her beloved mountains, there where Maria is convinced she belongs.

But even in the convent, there's a window. It's reflected on the back of the stage, made of light, "constructed" from stained glass. And there's music, in the beautiful voices of the perfectly cast nuns, nuns who can see the beauty in the gray world they inhabit.

When Maria leaves the convent to be a governess to the Von Trapp children, she's apprehensive. She's leaving the safe, quiet place she knows for a world full of children, and color (remember the clothes she sews from the curtains?), and song. And thunder, and lightning, and games. And dancing. And laughing.

Love that's terrifying, and enrapturing, and exciting, and awesome all at once.

So awesome, in fact, that Maria runs when Brigitta (played by Svea Elizabeth Johnson, probably the most charming of the seven brilliant child actors who make this show such a joy) tells her that Captain Von Trapp has fallen for the governess. And, even scarier, that, she, Maria the governess, is falling in love with him.

What does Maria do? She runs back to the convent. Because, safe. Because, familiar. Because, not colorful, but not terrifying either.

And the Mother Superior sends her right back. My friends and she would hit it off, I tell you.

And Maria is able to embrace the light.

It isn't easy, for Maria or for the children, either. She has to teach them - and perhaps learn alongside them - that we have to start at the very beginning. We have to learn the notes. And then, when we put them together, we can sing 'most anything.

In the program, Kerstin Anderson's bio tells us that she was a college sophomore when she was discovered and cast in the iconic role to sing about how the hills are alive. On Tuesday night, by the time she was through the first verse of "The Hills are Alive," it was clear to me and everyone else in the Academy of Music audience that she will become a superstar - it's just a matter of time. But, I wondered, when will it happen that Ms. Anderson, whose world is currently so full of color, turns gray? It will be temporary, I hope, and it's hard to imagine dimness in her future, so talented and alive is she. But when trouble strikes, as it inevitably does, perhaps she, like the rest of us in that audience, will take away The Sound of Music's key message: that outside in the hills live color and music, that we can escape the Nazis or an invading regime or even the sadness that is lost love, that we don't have to live in a convent to find peace.

The mountain may be high and treacherous and hard to summit. Our job? Just to keep climbing. The views from the top are pretty amazing. Just like this national tour of The Sound of Music.