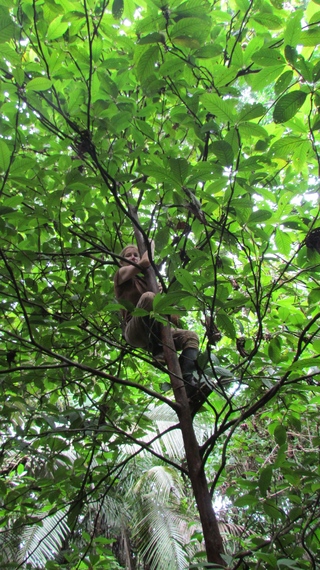 As I sat in a tree in the Amazon, I wondered whether I would live or die. My life rested in the hands of two guides that I barely knew, and who were only about 27 years old. I only met my "official guide", Jose, four days prior but the other guide had just paddled us in a canoe from the riverboat to the jungle. He hadn't even introduced himself. Now my life was dependent on both of them.

We started our adventure following what we thought were two wild boars through the dense vegetation of the Amazon jungle. We were following closely and hoping they had tusks which would make a more interesting photograph. But suddenly, we heard a loud noise. The guide who paddled up the canoe darted up the tree. He raced down as fast as he scurried up. The two guides communicated in a language that was unfamiliar but it didn't matter. The sheer look of panic on his face communicated to me that this was not an ordinary problem.

Jose rapidly explained to me that we had actually been tracking a herd of about 100 boars with babies. We came too close and the boars thought we were going to attack their children. The loud noise we heard was a charging call. Boars are quite savage despite Disney's cute portrayal of Timon in The Lion King. Jose calmly but firmly stated that we needed to immediately climb up the tree.

Surely he was joking. I was 50 years old and lived in New York City. We barely have trees and the ones we have, are lanky with iron tree guards surrounding them.

Jose explained my choices to me; I either climb the tree or die. To him it was no big deal. He didn't understand my concern since he had demonstrated yesterday how to scale a tree. I thought he was explaining Amazon life rather than teaching me a new skill set. I clearly would have paid closer attention.

He further explained, that climbing the tree would not necessarily prevent my death. The boars could use their heads to shake me free. Therefore, I should hold the trunk tight if they began to knock their heads into the tree; as if I couldn't figure that out on my own.

Jose took my backpack and camera so it would be easier for me to clamber up the tree. The irony was that my bag was from the luxury resort Amangani in Jackson Hole, Wyo. What I wouldn't have done to swap locations. In fact, all I could think about besides dying was: what was wrong with Paris and why couldn't I visit "normal" destinations?

Jose hoisted me up and I stepped onto his shoulders to reach the first accessible limb. I quickly learned the pro-tip to step lightly to ensure the branch could withstand my weight. I quickly scrambled up seven branches. It is amazing what a person can accomplish when faced with imminent death.

The two guides each ascended and sat in their own trees. Looking at three people sitting in individual trees was so scary but yet there was something oddly funny about the situation. I knew that this was nervous laughter and I was now in panic mode. But, we need to be silent to avoid detection and not alarm the boars which might encourage them to charge.

The guide whose name I never learned was on boar watch while Jose's job was to watch me and ensure I was quiet. The guide from the canoe would periodically descend, climb another tree further down the path to track the boar's movements and then shinny down to ascend his primary tree. The ease which he scaled the trees was fascinating to me and became a distraction to my panic and giggles.

Jose seemed unfazed. He had previously been in this position and it was no big deal. But for a New York City girl, this was overwhelming. His reassurance and both guides' act of kindness as they repeatedly took charge of the situation helped keep me calm.

Death was definitely on my mind. As I sat in the tree with leaves flapping in my face, my thoughts alternated from planning my funeral to wondering how I found myself in this insane position? I motioned to my guide to take photos. The coroner would surely need them to understand my injuries similar to on the television show NCIS.

My children would also never believe that their mother was capable of climbing a tree. The snapshot would provide uncontroversial proof of what I accomplished. The photo could also be enlarged and placed in front of my casket since my bones and body would be disfigured. I imagined my daughter relaying the story of my demise but saying, at least she was killed doing what she loved, traveling.

While I was planning my memorial service, the boars apparently turned the other direction. We thankfully could leave. Going down was much harder than climbing up the tree. We quickly rushed through the marshes and bumped into the search team that had been sent to find us.

For my guides, this was just another ordinary day in the Amazon. For me, the adventure quickly began to shift from a harrowing tale to a funny travel story. But just in case, I do now register with the State Department's STEP program whenever I travel lest, I end up in a tree again.