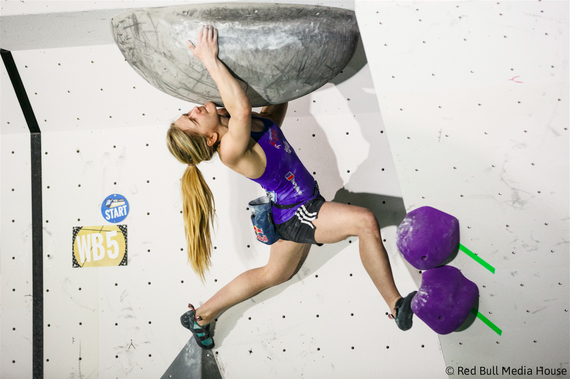 As the decision on climbing's inclusion in the 2020 Tokyo Olympic Games is approaching fast, the sport is attracting more and more attention from outside of its community.

Meanwhile, the climbing world itself is split between those who support making the lifestyle pursuit an Olympic sport, and those who oppose it. Many wonder what the limelight will mean for a discipline which originated in the wilderness, far from the mainstream lifestyle.

Since those days much has changed, and now the competitive side of climbing is growing fast, on artificial walls and in front of the cameras.

Marketing, money, and social media are affecting the discipline much in the same way that they affected skateboarding and surfing.

From the fringes of society to the centre stage of the Olympics, I wonder what this change will mean for the women who climb.

Like most other communities, climbing has a wealth of its own, dedicated media. Two decades ago, it used to be print magazines, eagerly awaited every month, and every blue moon a videotape documenting the most coveted ascents. Now, everything is different.

Social media has brought about an era where the line between the audience and the creatives is blurred. Whatever the flaws of the media we consume, we've got the power to change it through producing our own. And the obvious flaw of lifestyle sports media used to be the absence of women.

Three years ago I researched female climbers' attitudes towards this issue. One of my first informants was Vanessa, an instructor at my local climbing gym in London. We sat under a campus board, a ladder of wooden rungs to hang off and train finger strength. Vanessa was apprehensive, and I couldn't put her at ease.

I switched off the recorder, knowing that interviewees tend to say the best things when theoretically done. Vanessa didn't disappoint. "If you go to the shop and look at the magazines," she suddenly said, "there will always be -- I don't know why -- seventy-five percent of covers featuring a female. But there are fewer girls climbing. Have a look. If you have a nice cover, it's always a girl."

So we got up and walked outside to the gear shop located on the other side of the climbing centre's yard. There was a big pile of magazines by the entrance, and we flicked through the covers. Quickly it turned out that more than half of the random sample indeed portrayed women.

The shop owner peered at us from behind the till, intrigued to know what we were doing. I explained, and he leaned over the counter and said: "Well, it will sound horribly sexist, but it depends on what kind of a cover it is. If it's decorative, it's usually a woman. The route doesn't even need to be hard."

And that's how to sell a climbing magazine.

It's been three years since that interview, and they were three poignant years for the women in climbing. Not only is the performance gap between the genders rapidly closing, but also, as with many other lifestyle sports, women took to keyboards and cameras to produce their own media.

"We're on the cusp of a shift, a cultural and gender swing, if you will. Soon, the men's world tour will be the support act," starts an interview last year with surfer Coco Ho for Stab Magazine.

But if indeed surfing is on a cusp of a gender revolution, then I fear it's the revolution of 16-year-old chicks, clad in scanty bikinis. Yet again, empowerment gets confused with sexualization.

Taking into account the history of women's objectification in sport-related media, should this really come as a surprise?

The dominant discourse goes something like this: Girls are pretty, but they can't really do sports, so let's put a token girl in here and there. Make sure she looks really hot. After all, it's not about her skills, it's about her cute face. She will make men buy the magazine and make other women want to be like her, because men find her attractive. What other things could a woman possibly want from doing sports apart from finding a guy?

It may sound grim, but this is the truth of mainstream media. And apparently, the marketing tactics kick around in lifestyle sports media too; as open-minded men and women fight the bias, it punches back with an influx of big sponsors wanting to make big money. And you can't go bigger than the Olympics.

Huge money, huge audiences, huge stakes. Climbing -- originally a domain of the white, upper class and heterosexual men -- is an increasingly egalitarian community, but outside pressures are likely to obliterate the push.

While the interest that comes with the Olympic bid might bring more women into the sport, it will also bring the same sexist currents that characterize mainstream sport and the celebrity culture around it. I fear that, as with surfing, the climbing community won't be able to fight it off.

Competing for sponsorship deals and the attention of cameras, top female athletes will go out of their way to please the male gaze. Something intangible, but pure and beautiful about our discipline will likely be lost.

Organizations such as Outdoor Women's Alliance in the US, or Women Climb in the UK, as well as a wealth of independent websites and bloggers do their utmost to empower women and promote fair representation in climbing and adventure sports media, but if climbing becomes an Olympic discipline, coveted by the mainstream outlets, our efforts might just become a drop in the ocean.

As climbers, media consumers, creatives and simply decent human beings, we must remember that in the long run, sex sells you short.

The only thing we can do as the audience of great sporting events, is maintain a critical eye. Although I don't feel like we had a say when London 2012 was sponsored by sugary drinks, beer, and fast food brands, I want to believe that we can still stop the objectification of the climbing athlete, before it's too late.

The original article was written for Outdoor Women's Alliance and can be found here.

The full text of my MA thesis on climbing women and media can be found here.