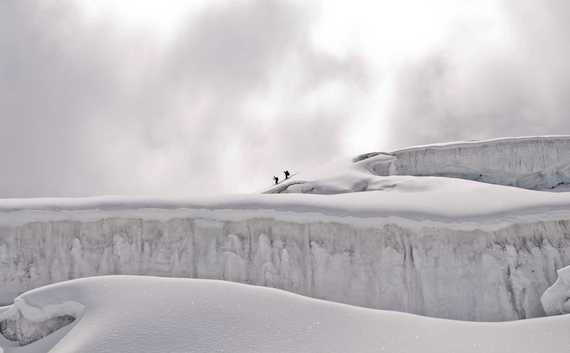 When I left off with my story of summiting Mt. Manaslu, I was just being woken up by my Sherpa guides.

But, before I go into the details of summit day, I want to preface my story by recounting an eerie feeling that I experienced for the first time in my mountaineering career. At some point during the expedition -- I don't know for sure when -- I had this realization that death is a real concern when you get up on these big mountains. Death, as in a full stop to life. End. No more mountains. No more family. Poof, all gone in matter of seconds.

Had the death of an experienced mountaineer frightened me? Did hearing news about climbers suffering from frostbite set my stomach churning? Was the news of deaths on a different mountain that soon hit our base camp send terror through my body? Or was this feeling completely unrelated to mountaineering? I'm not sure. This had become an unusual feeling plaguing me throughout this specific climb, except for one day, the most important day: summit day.

Dorjee Sherpa was the name of the guide accompanying me on summit day. As he helped me get ready, he setup the mask on my face, put the tank in my backpack, and finally turned on the oxygen flow. I was immediately met with a sudden increase in energy and adrenaline levels.

My first thought was, "This is great! I feel great!" Our Sherpa team leader, Mingma Tenji, had told me that the effect of oxygen would take about 20 minutes to kick in, which had me questioning whether the rush was psychosomatic or not.

Dorjee and I finally started walking. It was happening. It was real. In few hours I would breach the 8,000 meters boundary and enter the "Death Zone."

Just as we began walking, my Sherpa asked me to go ahead, telling me that he would rejoin me soon. I was a bit hesitant as it was dark and there were no safety ropes through the entire summit route, but I moved ahead anyway. I started increasing my pace, filled with energy from an unknown place. During the initial portions of the climb, the trail was visible, which I used to guide me, in addition to the light from the headlamps of the other climbers ahead of me.

Soon I passed one of my teammates and her Sherpa guide. And then, after another half an hour of climbing, I passed another teammate and his Sherpa guide. I was moving aggressively through the terrain without any breaks. And then suddenly I was alone on a plateau. Only one teammate was ahead of me, but I couldn't see him or his headlamp as he had moved on top of another hill about 20 minutes away. For just a minute, I turned off my headlamp and stood in the freezing cold, pitch black of the mountain.

I felt like I was the only person in solitude on Mt. Manaslu. I felt spectacular.

At this point, there could have been so many things that went wrong. My oxygen could have stopped working. I could have missed the trail. I could have gotten altitude sickness. And yet, here I was all alone feeling euphoric. I could hear the eerie howling sound of oxygen coming through from the bottle, the pipe, and into my mask.

I had been walking alone for two and a half hours, when suddenly the headlamps ahead of me began moving very slowly. I tried maintaining my pace but, as I got closer, I realized that I should slow down, as the route could be dangerous (thus explaining the deliberate movements of climbers ahead). I turned around and saw no headlamps coming toward me.

I made a decision to forgo my solitude in favor of safety and wait for Dorjee. Almost 15 minutes passed and there were no signs of headlamps yet. After a half an hour of waiting and moving to keep warm, I finally saw my Sherpa! Eventually he had caught up to me.

I asked Dorjee to lead and pace up to the summit. I had realized the mistake I had made of charging ahead by myself, and wasn't looking to do more of the same. Dorjee's pace was very measured and both of us soon found a harmonious rhythm. Shortly thereafter, the first light of dawn hit the entire mountain and we could clearly see the summit route ahead of us. We were about an hour and a half away from the summit.

Slowly, we got to the base of the final steep climb towards the summit. Just as we were in the middle of this final section, I saw the most beautiful scene of the entire climb: the triangular shadow of Mt. Manaslu covering the entire expanse of the Himalayan peaks below. I had always heard about this phenomenon, but never seen it. And, there it was, Manaslu and its shadow across the Himalayas in all its glory.

That's when I got the answer to one of my most asked questions -- "Why do you climb?"

After soaking in the beauty of the scenery, we kept climbing until we reached a small plateau-like section just about 30 meters below the Manaslu summit. I was standing at 8,130 meters, or 26,500 feet, the highest I had been in my entire life. The sun was shining across the entire Himalayas. The clouds were all down below in the valley. The 360 degree Himalayan vista has by far been the most spectacular vista I've ever experienced. 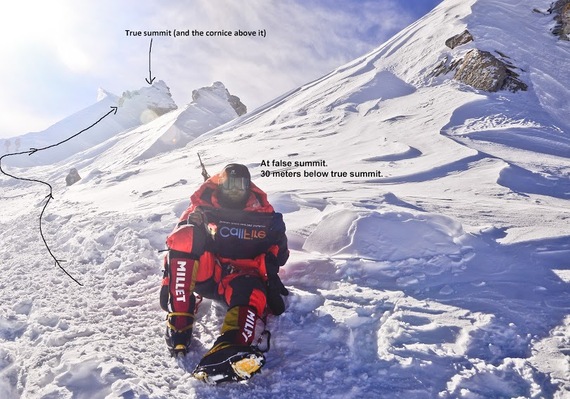 Dorjee and I started the final climb towards Manaslu summit. As soon as we got on the final section, there was a steep drop of more than 3,000 feet on all sides. However, I wasn't scared. My mind contained only one thought: the summit of Manaslu. All I could see were prayer flags fluttering on the summit. I wanted to get there. I reached the final stretch where only one person could make the climb.

Contrary to everything, I felt utterly emotionless on the summit. No joy. No tears. No happiness. Only one thought was in my mind: take a photo and then get the heck out of there as soon as possible. Sometimes achieving your goals doesn't feel the way you imagine it will, and that's ok; the experience carries no more or less weight in relation to emotion shared.

I wasn't able to feel the joy until we got down to the safety of the false summit plateau 30 meters below. It was then that I was finally able to reflect on what I had just accomplished and I smiled. I exchanged a high five with my teammates, took some pictures, drank some water, and started my journey home. I had done what I came there to do.