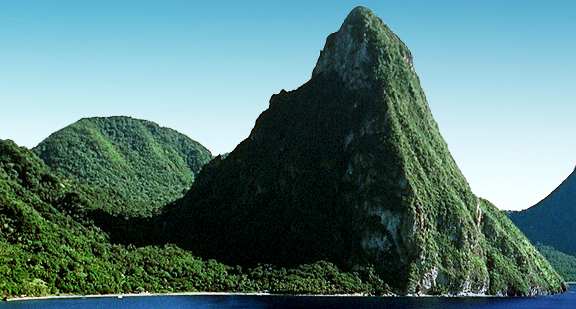 Photo of the Pitons courtesy of Saint Lucia Tourist Board

I look for a toehold, plant my hands on a boulder, and push myself up a few feet only to look for another toehold, then handhold, and repeat the process. I am climbing Gros Piton, a twin mountain along with Petit Piton on the western coast of St. Lucia. When I first looked up at the mountain on the way to my resort from the airport, it didn't look much higher than Bear Mountain in the Hudson Valley; but now that I'm huffing and puffing and sweating so much that even my knees are dripping, I feel every one of its 2,619 feet above sea level -- God only knows how much is below the sea. When I surveyed it from the ground, it looked like an upside-down lopsided lush green ice cream cone coming right out of that bathtub-warm sapphire blue Mediterranean water -- exactly where I wish I were right now.

Because the first half of the mountain is mostly exposed to the sun, we've started early -- seven am. There's no one on the mountain except us, and that's really nice. My guide, Morye Chernas, who is 61 years old, has been leading private and group tours up this mountain for the last 20 years. He's sweating like me -- but maybe just because it's hot -- he's not huffing and puffing. Often Morye leads two hikes a day here and sometimes even three. "And then the next day I have to go to the beach," he laughs.

When we started out, I took the lead so I could set the pace. I plan to book it to the top and get back down even faster so it won't turn into the four to seven hours it takes most people to do it. The trail started out easy -- a few gentle rises and lots of loose rock, and then it got steeper, but I didn't mind that -- hey, I'm a New Yorker -- so we smoked up. At the halfway point, there was a bench made of tree trunks. When most people arrive at this point, they think they've reached the summit because of the bench and the endless view of sparking water. But I did some research before I came, and in every story, hikers arrived at this halfway mark and thought it was the summit. They were miserable to learn they were only halfway. My philosophy in life is never do anything to make yourself disappointed. Knowing in advance it was only the halfway point didn't bother me. Besides, when I sat on the bench, I felt special because Morye not only built it, he also built all the trails, and has been maintaining them for the last twenty years.

So now we're on the trail for the final half, and I'm silently praying to the Mountain Gods that I don't pass out before I reach the summit. This half is twice as steep, the boulders are bigger, and sometimes I have to pull myself up holding onto tree trunks. My legs have turned into glue. My quads are screaming, reminding me of what a big shot I thought I was, thinking I could charge up an almost 3,000 foot mountain with no training and under an hour. The last time I hiked was more than six months at the Grand Hotel Villa Serbelloni in Italy; and those peaks above Lake Como were anthills compared to this. 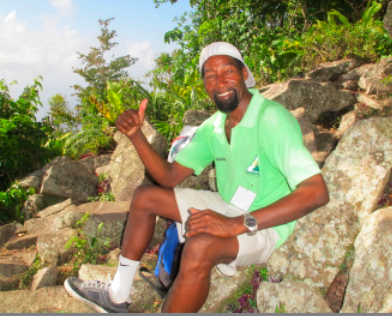 We arrive at some wooden steps which Morye long ago cut into the trail. He also built a railing made of branches, and I use it like a rope to pull me along. This is endless. We arrive at a huge Mango tree, which he says is the three-quarter point. I grab some water and we start out again on another steep section of boulders. This isn't hiking -- this is rock climbing! I'm so winded I'm almost wheezing, and I don't know if it's because of the altitude or the heat or maybe I've just gotten old and my body doesn't respond the way it used to.

The last part feels longer than the entire climb, but finally, we arrive at the top and I slap Morye a high five. He points down across the Atlantic to St. Vincent, 26 miles away. Below, the houses in Soufriere look no bigger than Monopoly pieces. But where's Petit Piton? To see it, he says, you have to decend a little and then continue back up a spur trail. More uphill? I do it. The new trail makes me think I'm somewhere in the Amazon. There are three points where we have to ascend on wooden ladders, which I know are safe because Morye made them. Every now and then he reaches down and scoops up a large stone or tree branch to remove it from the trail. We finally arrive at the top for a spectacular view of Petit Piton, which I think is even better than the view we just saw. 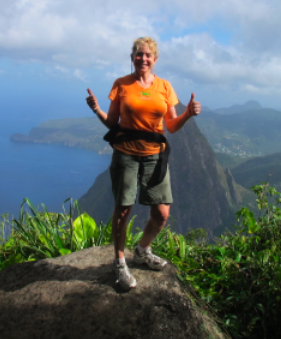 Margie Goldsmith atop Gros Piton looking down on Petit Piton

Most accidents in mountain climbing occur on the way down because climbers have used up all their energy summitting. I am absolutely exhausted and can only think about the massage I've booked for later at the Jalousie Plantation where I am staying -- that is, if I get down. Everyone said I could do it in running shoes, but if I were wearing my hiking boots, I wouldn't worry so much about an accident. "What would happen if I twisted my ankle?" I ask Morye as a loose rock slides out from under me and I grab at a branch to prevent a fall.

"I would have to carry you down," he answers.

That would be nice, I think to myself.

Later, I am lying on the lounge of my terrace, staring at the views of Petit Piton on one side and Gros Piton on the other. I look up and grin, and then order room service because I don't want to move my legs, which have not yet recovered.

Voting Made Easy
Register to vote and apply for an absentee ballot today
Register now
More:
mediterraneanbeachsunst. luciamountains
Newsletter Sign Up
An essential daily guide to achieving the good life
Subscribe to our lifestyle email.
Successfully Subscribed!
Realness delivered to your inbox