This is the third installment in a three-part series of dispatches from Mount Merapi in Indonesia. Read Part 1 here and Part 2 here. 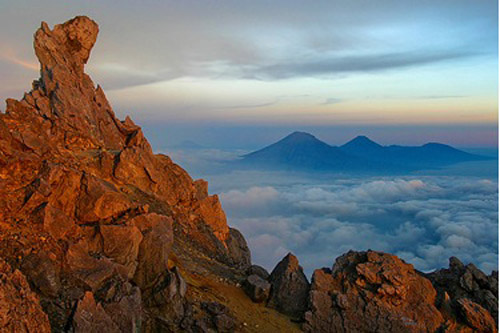 The last possibility appeared to the south with another cloud diffusion. One side of the canyon tapered from our level upward for about a thousand meters to a tree-lined rim that looked like a saddle between two minor peaks. If we could whack up the side through the jungle to the rim, we might find a passage out of the canyon.

By now it was getting late. We were several hours behind schedule already and were certain Daddy was worried, perhaps even organizing a search party. George suggested we quit for the day -- we'd been hiking for 17 hours straight and were exhausted. But I was afraid of bivouacking; we were soaking wet, had no sleeping bags, nothing dry or warm to change into and we were still at a high elevation. I was afraid if we stopped we'd freeze to death.

So, we continued, bulldozing through the vines, slowly working our way up the cliff face. It was getting dark, and we were mucking upwards to higher elevations, where conditions would be worse if we had to crash for the night. And the going was painfully slow -- only a few meters in a good minute. At this rate it would take days to cross over the ridge and make it down to the rice paddies.

By default I was the trailblazer in this latest exercise, trying to thrash a semblance of a path through the snarled, daedal jungle. It was grueling work for an already drained body, and I felt about to drop when I stepped onto a piece of packed earth and stopped. Wait a minute, I thought, this doesn't belong here. It was a path -- a faint but very real trail. Not an animal trail, either. Looking closer I could see fresh machete marks, tiny swaths of white skin under the broken bark of overhanging twigs and branches. I even found the indentations of fresh footprints. At that moment, this hint of a trail looked to me like a turnpike, a superhighway headed off Merapi.

It turned out we had stumbled across a wood-collecting trail for a middle-elevation village. As we traced it up to the ridge we had no idea of its purpose, or destination, but we felt it could only lead us out of our predicament. The dark came with equatorial suddenness, and we were slogging along with just two flashlights between us. I regretted not having gone back to find mine earlier in the day. At times we tripped off the path and slid down muddy slopes to canyon edges, only to crawl back up seeking the tell-tale machete marks.

We decided to break for a dinner of soggy bread and peach jam, with a few slugs of water. Sandra refused the food. His eyes glazed -- he looked on the verge of collapse. I asked him if he wanted to call it a day, but he shook his head no; he wanted to keep going. I took the pack off his back to lighten his load, and we continued.

We kept trekking until ten, when, with the flashlights draining light, we lost the trail again. We were mashing around a muddy slope looking for machete marks when a wave of exhaustion washed over me. "We gotta stop," I called out, and George didn't protest. We'd been on the road nonstop for 22 hours. We had to rest.

I gestured to Sandra that, even though we were on a mean slope, we were going to stop and sleep. I thought he would be thankful, but he launched into a tirade. His English improved a multiple -- he started screaming in full sentences that we couldn't stop. That his friend was waiting for him. That it was our fault we had led him down this canyon. That if he fell asleep we would abandon him. He seemed to be running amok.

He rambled about how many times he had climbed Merapi, and nothing like this had ever happened. At first I tried to assure him things would be okay if we just caught some sleep, and that we would not abandon him, but as he continued his rantings I became too tired to argue, and lay down in the mud at his feet and slept.

At first light I jumped up and slapped myself for warmth. I climbed back uphill to look for the trail we'd lost last night. I found a path, fetched George and Sandra, and we followed this route to the verge of another cliff. Apologizing, I turned and headed further up the hill. Legendary for their emotional reserve, the Javanese are said to have a smile for every emotion. But Sandra's long, smooth face was, at that moment, frowning.

An hour later George found the lost trail, which maddeningly scratched back up the volcano. But it was a clear trail, and seemed the only course to take. It was the correct course. The trail snaked up a series of interstitial canyons to points on the volcano where they could be crossed, then wound down the other side, always moving in a southerly direction. We traversed a half-dozen small canyons in this fashion, sometimes intersecting with washes that invitingly poured straight downhill, and which enticed Sandra. When we said no to his appeals, Sandra would sneer and shake his head in disgust, then fall into line behind us.

Then, at around 8: 00 am, we rounded a bend and met a family of four, including a man with a machete along with his wife carrying a wood-collecting basket. As we continued the jungle gave way to wils grass, and planted groves of sibilant pines and acacias, part of a government sponsored program to reforest the devastated sections of the mountain's flanks with trees that might better resist the liquid fire of lava flow.

Two and a half hours later I tripped over a rise and looked down on the characteristic nipah-thatched huts and red and brown terra-cotta roofs of Javanese village homes. We were on the road to Kinahrejo. At 3:00 pm we staggered up to a van that contained a shocked and relieved Daddy, and the rest of our original climbing party, including a recovered Taufik. A corps of 27 search-and-rescuers swarmed around us, pumping our hands. They had spent the last 20 hours combing the volcano, and had just returned with the conclusion that we were dead, poison-gas victims who fell into Merapi's maw.

There was cheer all around, and offerings of wedges of white bread and pasteurized cheese, which we stuffed into our mouths in a burlesque of a Pantagruelian feast. Sandra smiled for the first time in a day and a half, and even stole a few seconds from the celebration to give me a hug.

As we boarded Daddy's van to head down to Yogya for a long rest we turned and looked up to Merapi's summit. It was still wrapped in a shroud of shifting gray silk-like clouds, looking as vaporous and serene as a Japanese watercolor.


More:
travelIndonesiavolcano
Newsletter Sign Up
An essential daily guide to achieving the good life
Subscribe to our lifestyle email.
Successfully Subscribed!
Realness delivered to your inbox