In Hillary Clinton, the Democrats seem determined to nominate the most disliked Presidential candidate in polling history, unless, that is, the Republican establishment fails to stop Donald Trump, who's even more disliked.

The latest NBC/Wall Street Journal poll shows 56% of voters holding a negative view of Hillary and only 32% holding a positive view, a record-breaking minus 24% rating.

Meanwhile, 65% of voters view The Donald negatively and only 24% view him positively, an even more record-breaking minus 41% rating. (The numbers for Ted Cruz are 26% positive, 49% negative, a minus 23% rating which is actually 1% better than Hillary's.)

The only candidates viewed positively by the voters are being rejected by their party's respective nominating process in favor of candidates whom a majority of voters generally hate.

If that's the end result, the American political system is even more broken, and the process more rigged than even Bernie and The Donald are claiming.

There are many factors leading America down the road to becoming a failed state. But first among them is a corrupt campaign finance system which has led to a massive transfer of wealth from the bottom 90% to the top 0.1%.

This chart tells a big part of the story: 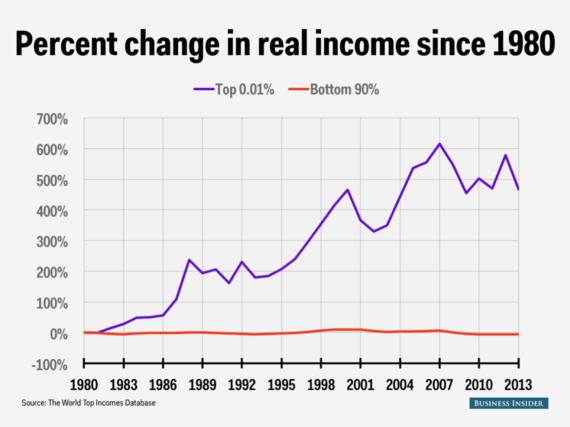 Since 1980, when Ronald Reagan became President, the real income of the to 0.1% has risen nearly 500% while the real income of the bottom 90% has been stagnant. This has been the trend under both Republican and Democratic Presidents. For the first time in American history, many Americans no longer believe their children will have a better life than they've had.

This trend is largely the result of both parties following neoliberal policies of deregulation and tax cuts favored by the donor class. It began under Reagan, but it was Bill Clinton who deregulated the financial system by abolishing Glass Steagall and prohibiting the Federal government from regulating derivatives. And while, under Obama, unemployment has been cut in half from post-crash levels, incomes have remained stagnant.

With the elites of both parties more concerned about raising money from the billionaire donor class than serving the interests of the majority of Americans, is it any wonder that voters in both parties are rebelling against the elites?

The national Republican party is cracking up the fastest, with Donald Trump the presumptive nominee and the much-hated Ted Cruz the only alternative. Meanwhile, the Democratic elites seem to be holding onto Party power by their fingernails, with Hillary Clinton likely to squeak out a victory over Bernie Sanders, who's a less than perfect vehicle for his compelling message that a political revolution is necessary to overcome a corrupt economic and political system. (If Elizabeth Warren had run, my guess is that she'd have won the Democratic nomination in a landslide.)

If America were a parliamentary democracy, it's likely that both the Democrats and Republicans would each split into at least two separate parties -- On the Democratic side, the Sanders/Warren wing would form a new progressive populist party like Podemos in Spain or Syriza in Greece, leaving a rump Democratic Party of the corporate center. On the Republican side, the Trump wing would form a right-wing nationalist party like The National Front in France or the Party for Freedom in Holland, leaving a rump Republican Party of the corporate right.

But America's winner-take-all political system makes it almost impossible for new political parties to gain traction. It's been over 150 years since the last time a successful new political party emerged when, in 1860, the Republican Party replaced the crumbling Whig Party at the outset of a Civil War in which over 600,000 Americans were killed.

So in America, the growing rift between the elites and the people is fought out within the Democratic and Republican Parties, rather than by supplanting them. But the elites have grown so complacent and arthritic that the existing parties are having difficulty containing the conflict and both parties seem on the verge of nervous breakdowns.

Whoever wins the 2016 election, the conflict between the elites and the donor class, on the one hand, and an increasing percentage of the people on the other, isn't going away. The long-term results could be dire for America and the world.

In the meantime, get ready for a Presidential elections between the two most hated candidates in modern American history.

The only thing that might retard that outcome would be for New York Democrats to give Bernie Sanders a come-from-behind victory. But "liberal" New York has restrictive voter eligibility rules which slant the results towards an establishment candidate like Clinton--Independents (and members of the progressive Working Peoples Party) can't vote in the NY Democratic primary and, unless an independent or WPP voter changed registration to Democratic by last October, before Bernie caught fire, the still can't vote on Tuesday.

So the much hated Hillary Clinton vs. the even-more hated Donald Trump, here we come. Break out the bubbly!