Thirty years ago we had an October surprise when President Ronald Reagan and Soviet president Mikhail Gorbachev talked about eliminating all nuclear weapons. It was the Reykjavik, Iceland summit where the two leaders made getting rid of nukes a "cool" idea.

Reagan and Gorbachev, encouraged by public support, started the movement toward nuclear disarmament. We want our next president to share their bold vision. That person is Hillary Clinton. 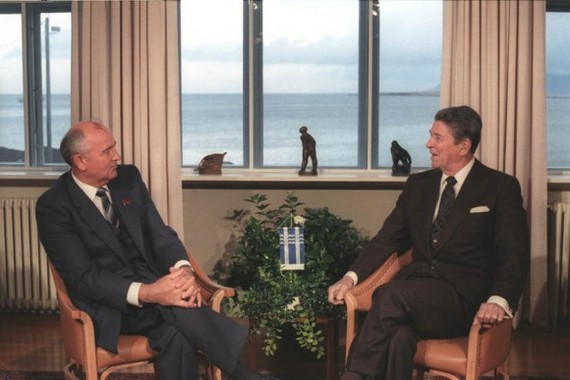 President Reagan and President Obama both called for the elimination of all nuclear weapons. Hillary Clinton is the best choice for president to continue the road toward nuclear disarmament. (top photo from National Archives and bottom photo from hillaryclinton.com)

As Secretary of State for President Obama, Clinton negotiated with Russia on nuclear arms reductions including the 2010 START treaty.

Clinton, earlier this year, told the disarmament group Global Zero, "I will continue to do much of what I did as Secretary of State working with President Obama [to make sure we're on a path toward eliminating nuclear weapons]. We worked hard to reduce the stockpiles of weapons between Russia and the United States. [...] One of my goals as president will be to get China involved." This will be crucial for helping stop North Korea's nuclear program.

Obama, like Reagan, called for the elimination of all nuclear weapons. Some have labeled that idea unrealistic.

Reagan himself heard those doubters. After the historic Reykjavik summit Reagan said, "I can't help remembering being told just a few years ago that radical arms reduction was an impossible dream, but now it's on the agenda for both sides." Within a few years treaties were signed reducing American and Russian nuclear weapons, starting major progress toward their elimination.

But we still have far to go to rid the world of nukes.

There are still tens of thousands of nuclear weapons in the world today, most owned by the United States and Russia. China, India, and Pakistan are among the other nations with nuclear weapons stockpiles. North Korea has alarmed the entire world with its recent nuclear test explosions.

As long as these weapons exist, there is risk of terrorist theft or accidental launch. Estimates of the cost are frightening too.

Global Zero says the United States could spend up to 1 trillion dollars over the next 3 decades on the nuclear stockpile. That is money that would be better spent fighting hunger and disease, educating children, or creating jobs.

So where does Clinton start if elected president? She can cut the nuclear spending budget. She can pursue deeper nuclear reductions with Russia, down to at least 1,000 strategic nukes each. And we hope further.

But she must also work with the Senate to ratify an initiative started by President Dwight Eisenhower, ending nuclear weapons testing. Ike started the decades long road to the Comprehensive Nuclear Test Ban Treaty (CTBT), which bans all nuclear test explosions.

Hillary Clinton, who knows her history, is indeed an admirer of President Dwight Eisenhower. This bodes well for her potential administration, especially if she listens carefully to the lessons Ike can offer.

Eisenhower considered disarmament as essential for taking the burden off the backs of mankind of paying for expensive nukes.

Eisenhower told Walter Cronkite that not achieving disarmament, including a ban on nuclear weapons testing, would "have to be classed as the greatest disappointment of any administration -- of any decade -- of any time and of any party." Democrats and Republicans have to work together to achieve peace in the nuclear age.

It's vital for our national security that we follow through on ending nuke testing.

The alternative of returning to nuke testing would be extremely dangerous. If the United States were to resume test explosions Russia and China would do the same. Do we want to see a Cold War replay? An escalated, costly arms race would be next.

Clinton, while Secretary of State, warned "as long as we are confronted with the prospect of nuclear testing by others, we will face the potential threat of newer, more powerful, and more sophisticated weapons that could cause damage beyond our imagination."

Instead we must show leadership in ratifying the treaty and reject barbaric nuke explosions. The Senate unfortunately voted against the CTBT in 1999 during Bill Clinton's last term. There has not been a vote since because Republicans and Democrats have not been unified on the issue.

There are seven other nations (China, India, Pakistan, North Korea, Iran, Israel, Egypt) who have also yet to ratify the treaty. If China were to approve the treaty, they might convince their neighbor and ally North Korea to do the same. Ending nuke testing will help lead to disarmament.

We must keep moving toward a world free of nuclear weapons. As President Obama said, it will take years to achieve this goal. So naturally we are better off electing someone will keep the dream alive of zero nukes.

Hillary Clinton is the best choice for president to lead America in this noble quest.