Despite some erosion, Hillary Clinton's favorable rating still bests those of the other 2016 contenders. Polls show challenges for Jeb Bush but may not hold back endorsements. And positive feelings about vaccinations are on the rise. This is HuffPollster for Friday, March 13, 2015.

CLINTON'S FAVORABLE RATINGS AHEAD OF OTHER 2016 CANDIDATES - Jeffrey M. Jones: "Hillary Clinton is one of a few potential 2016 presidential candidates to have a significantly higher favorable (50%) than unfavorable (39%) rating among the American public. And the 89% of Americans who are familiar enough with Clinton to have an opinion of her is more than any other potential 2016 presidential candidate. Clinton's relatively high scores on both dimensions give her a better starting position regarding her image than other competitors would have in the 2016 U.S. presidential election. These results are based on a March 2-4 Gallup poll of 1,522 U.S. adults, conducted just as revelations about the private email account Clinton used to conduct business while secretary of state became a major news story, but before her Tuesday press conference addressing questions about the issue." [Gallup] 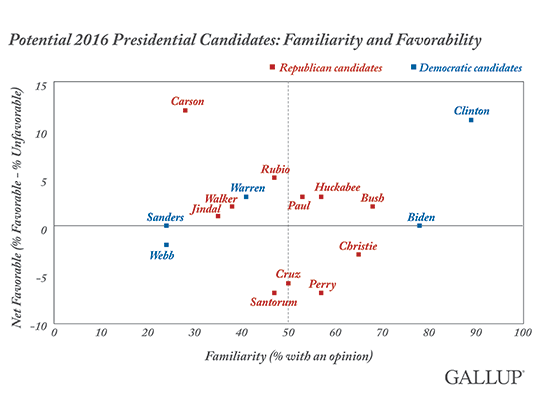 Bush's Clinton's position weaker since July - More from Jones: "Gallup conducted a similar analysis of the images of potential 2016 presidential candidates last July. Even as several of these individuals have attracted regular media attention in anticipation of a possible presidential bid, none of these would-be candidates has made significant gains in familiarity. But Perry, Cruz and Christie have moved from net positive favorable ratings to net negative, while Bush has moved in the other direction. Then, as now, Clinton was the best-known potential candidate among those rated, but her favorability rating is lower today. Last July, 55% of Americans had a favorable opinion of her and 36% an unfavorable one, for a net favorability score of +19, compared with the current +11 score."

JEB BUSH A 'FRAGILE FRONTRUNNER' - Amy Walter: "Ask anyone on the Acela corridor who the frontrunner and/or likely nominee for the GOP is/will be and you are most likely to hear the name Jeb Bush...[But take] a look at the polling and you see a very weak frontrunner. Despite (or because of) his famous last name, he does not have a statistically significant lead in any national or state poll. A whopping 42 percent of Republicans said they could not see themselves supporting Bush in a primary, reported the WSJ/NBC poll this week. A recent Quinnipiac poll in Iowa finds opinions of Bush among likely Republican caucus goers to be mediocre at best, with 41 percent saying they view him favorably and 40 percent viewing him unfavorably. Bush is tied with Scott Walker in McClatchy-Marist’s most recent polling, but he gets just 7 percent of the vote among very conservative voters (compared to 24 percent for Walker) and trails Walker among those who identify themselves as Tea Party by 8 points. However, if history is a guide, early polling – especially on the ballot test – is an unreliable predictor of future success in a primary. And, his overall favorable/unfavorable ratings among GOP voters are in-line with the other two successful GOP primary winners." [Cook Political]

EARLY POLLS DON'T PREDICT OUTCOMES...OR ENDORSEMENTS - John Sides: "You’re better off ignoring the early primary polls. Here’s why. Let’s start with the obvious. We already know that, this early in the campaign, presidential general election polls have essentially no relationship to the outcome....[W]inning the support of party leaders — not voters — is the key to winning the invisible primary....But what are these party leader endorsements based on? In The Party Decides, a team of political scientists...studied the primaries from 1980-2004 and found that endorsements were not correlated with early polls — or on early fundraising or media attention. They write: 'Thus, party insiders go their own way, regardless of polls, media, and fund-raising.' Moreover, they found that once endorsements were taken into account, there was only a small and statistically insignificant relationship between early polls and how many delegates the candidates won. Endorsements appeared to matter much more." [WashPost]

POLLSTER CHART FOR CHICAGO MAYORAL RUNOFF - Pollster now has a poll chart tracking the Chicago runoff election on April 7 between incumbent Mayor Rahm Emanuel and Cook County Commissioner Jesús "Chuy" García. All of the surveys give Emanuel narrow, single-digit leads but all but one show his support falling below the 50 percent needed for victory. Note, however, that all of the polls have been conducted either by partisans backing one of the candidates or by firms conducting automated interviewing that is barred by federal law from dialing mobile phones. [Pollster] 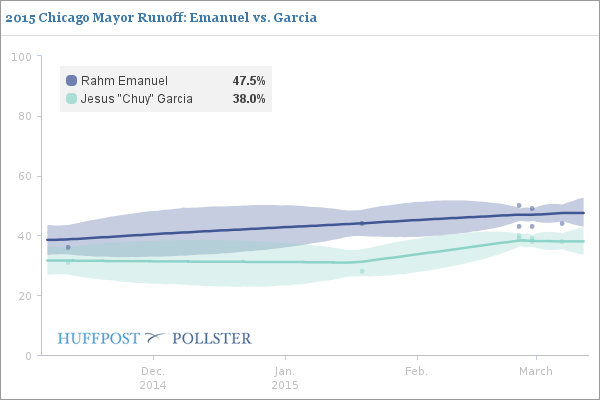 AMERICANS SAY IRAN LETTER WAS INAPPROPRIATE - HuffPollster: "Americans are more likely than not to say it was inappropriate for GOP senators to send an open letter to Iranian leaders, a new HuffPost/YouGov poll finds… Nearly 60 percent of Americans have heard at least something about the open letter, and 42 percent say it was inappropriate, while 28 percent find it appropriate and the remainder aren't sure -- a divide similar to views on the invitation for Israeli Prime Minister Benjamin Netanyahu to speak to Congress, which 47 percent of Americans said was inappropriate… As in the case of the Netanyahu speech, opinions split along party lines. About half of Republicans, compared to just over a quarter of independents and 11 percent of Democrats, find the letter appropriate. Overall, Americans are also divided on who they trust more to take the lead in dealing with Iran. Thirty-six percent say they would put their trust in Obama to negotiate a nuclear agreement with Iran, while 31 percent trust congressional Republicans, and the remaining 33 percent are unsure. [HuffPost]

MORE AMERICANS EMBRACING VACCINES - Amy Norton: "In the wake of the measles outbreak that has generated headlines for months, more Americans now say they have positive feelings toward childhood vaccinations, according to a new HealthDay/Harris Poll. Of more than 2,000 adults surveyed, 87 percent said they thought that the vaccines routinely given to young children are safe. That's up from 77 percent from a similar poll last July… 82 percent of respondents say childhood vaccinations should be mandatory for all children, up from 77 percent in the July poll... The new poll also revealed that 77 percent of adults believe that parents who don't want their children vaccinated should be required to get a doctor's certificate showing why they chose not to have them vaccinated. And 72 percent think that if a child is not vaccinated, he or she should not be allowed to attend school." [Harris]

-Nancy Cook explains why Americans look to local businesses, non-profits and volunteers rather than the federal government for solutions. [National Journal]

-George Gao illustrates how Americans stand out from the rest of the world. [Pew]

-Contrary to survey findings, Conservatives may not be happier with their lives than liberals. [NYT]

-Connecticut prefers the Yankees over the Red Sox by the biggest margin since 2006. [Quinnipiac]