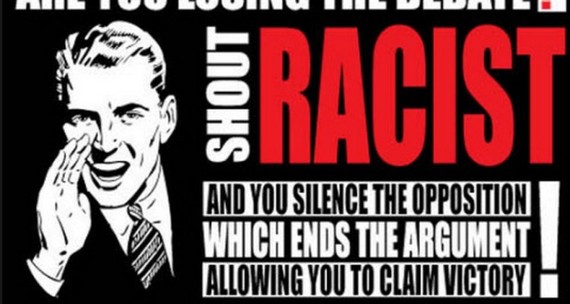 It's August of a Presidential election year. Must be time for Democrats to play the race card.

To be fair, Democrats play the race card every day, on every network, every single year. They have to. Their record of achievement with African-American voters - on poverty, on black-on-black crime, on education, on wages, on the unprecedented number of African-Americans on Food Stamps - is abysmal. As liberal black TV host Tavis Smiley said on HuffPost Live, "Sadly -- and it pains me to say this -- over the last decade, black folk, in the era of Obama, have lost ground in every major economic category."

Anytime this record of non-accomplishment is raised, Democrats have a predictable response: the GOP blocked us. Their favorite line of late has been that "Obama inherited the Great Recession from George W. Bush." This is known as The Bush Card, which is also used to explain ISIS, the growing debt and deficit, and more. 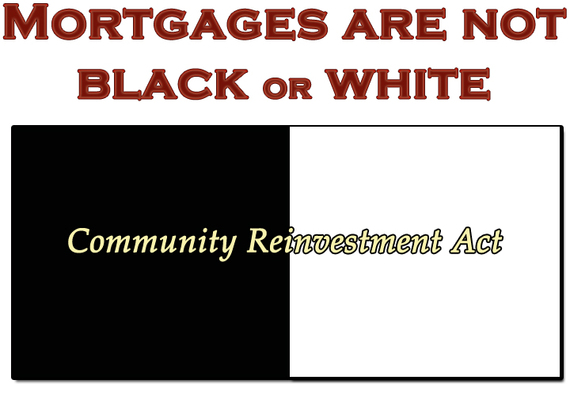 Never mind that the Great Recession was caused by the largely Democrat-engendered housing-for-all push embodied in the Community Reinvestment Act (CRA). Forget that liar loans, no-collateral loans, no-downpayment loans, bad credit loans and the collateralized debt obligations (CDOs) used to cover banks for being forced to take such socioeconomically sensitive, if irresponsible, underwriting risks (or risk a CRA rating downgrade) were enabled by the Democrat-backed CRA and Democrat-backed GSEs (Government-Sponsored-Enterprises) Fannie Mae and Freddie Mac. 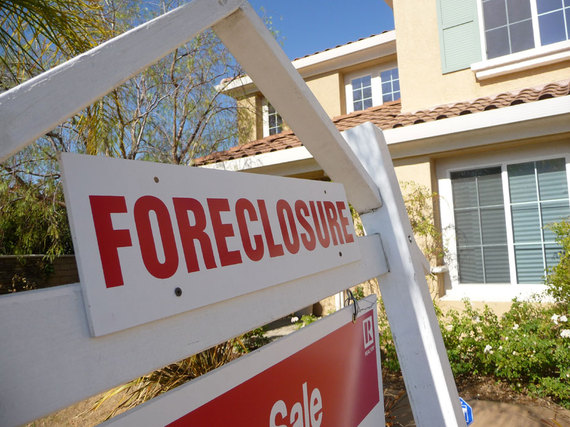 Naturally, the Democrats want us to forget all that. They also want us to forget that almost every other racial and ethnic group has risen out of the Great Recession - largely thanks to the wealth effect of Federal Reserve and European Central Bank quantitative easing, not so much anything done by Mr. Obama or other Democrats - except for black Americans. But, of course, for Democrats, It does not matter that the long and sordid history of Democratic plantation-style paternalism - from Jim Crow to the welfare state - has not only failed black communities, but kept them dependent on Democratic party elites for morsels of beneficence, instead of on their prodigious homegrown wits and resources.

None of that sad track record matters to Democrats, whose singular job, straight outta Robert Michels' Iron Law of Oligarchy, is to keep the votes rolling in and the party in power. So, every four years the Democrats gin up the black vote all over again by cynically pressing a deep PTSD wound through tall tales of phantom bogeymen waiting in the wings to lynch people of color.

Unfortunately for the Democrats this cycle, their failure to empirically improve African-American safety - the chief social good from which all other social goods flow - is too obvious to ignore. According to government data analyzed by the Wall Street Journal, violent crime has skyrocketed in the last year in Democratic-run cities like Baltimore (gun violence up 60%), Milwaukee (homicides up 180%), St. Louis (shootings up 39%), Atlanta (murders up 32%), and, that poster child for liberal law and order dysfunction, Chicago (where shootings are up 24%). 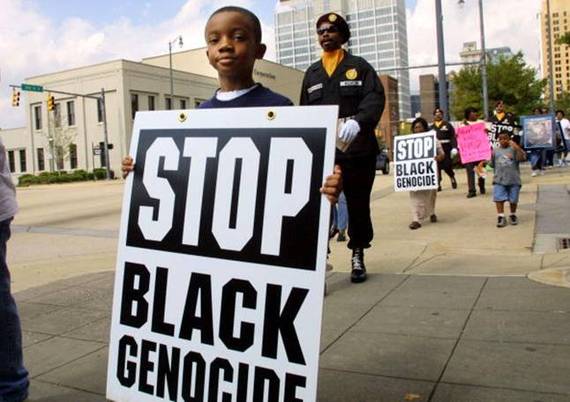 As these stark reminders of Democratic incompetence become widely circulated, Democratic use of the race card becomes more desperate and necessary. As liberal black commentator Juan Williams notes, buttressed by FBI and CDC data, the number one killer of young black men between the ages of 15 and 34 is not the KKK or rogue cops (however much these evils must be reined it), it's other black men.

Democrats and their "party panels" on mainstream media deem even the mention of these murder rates as "racist." Even though, in a beautiful bit of hypocrisy, should anyone, say Donald J. Trump, have the chutzpah to mention those rates, liberal black commentators will rail that "Most black people don't feel threatened with violence when they walk down the street!"

That this refrain contravenes the Black Lives Matter narrative of omnipresent threats of violence from white cops is conveniently ignored. There is good reason for this. Democratic jackboots want it both ways, and will viciously castigate anyone other than themselves who dares to talk about "black issues," including black conservatives, who are promptly labeled "traitors" and "Uncle Toms" in order to silence even a whiff of objectivity. 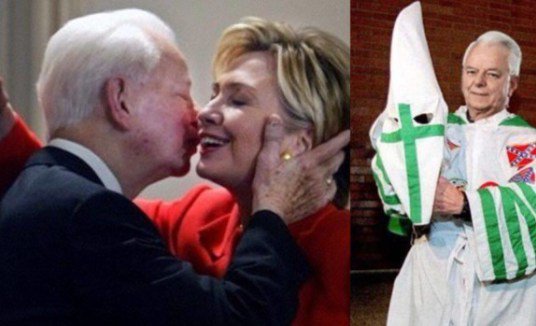 This year Hillary Clinton - who has befriended her fair share of Democratic racists in her time (hello Senator Robert Byrd) - has doubled down on this race card strategy. Her August 25 speech in Reno Nevada, and corresponding advertisement reprising the same outrageous slander, audaciously claimed that Donald J. Trump is not only a racist, but also a de facto member of the Ku Klux Klan.

Moreover, she goes further in outrageously claiming that anyone who dares to support Mr. Trump or work for Mr. Trump is a de facto white supremacist. The ad literally ends with the deranged claim that if Mr. Trump wins the Presidency, the KKK "could be running the country." Gosh, Mrs. Clinton, that Clinton Foundation scandal must be really hitting home. 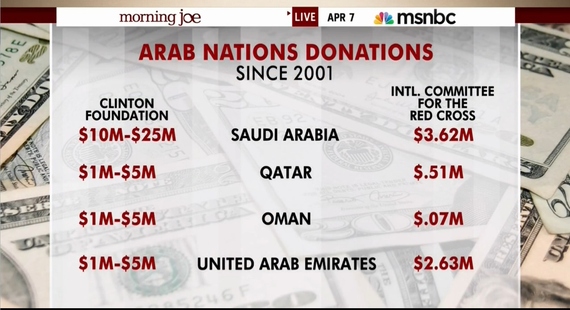 However, if Mr. Trump is such an incorrigible racist, shouldn't the Clintons return his $100,000 donation to the Clinton Foundation? And if he was and is a KKK member by default, why did you attend his wedding? Aren't you and Bill guilty by profitable association? 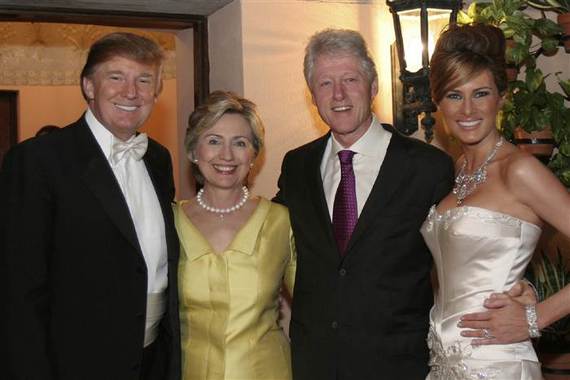 This "she stoops to conquer" strategy does not befit a public servant of Hillary Clinton's long standing. Secretary Clinton is far more educated in public policy, far more experienced on the global political stage, far more nuanced in her robust policy prescriptions, and far more conversant in complex governmental minutiae than the largely incurious and policy lite Donald J. Trump ever will be.

I backed Mrs. Clinton in 2008. When she plays the measured, learned stateswoman, she is at her best and most persuasive. When she engages in wild and heated hyperbole, as she did against then Senator Obama in 2008 and as she is doing now, she loses her prime selling point. 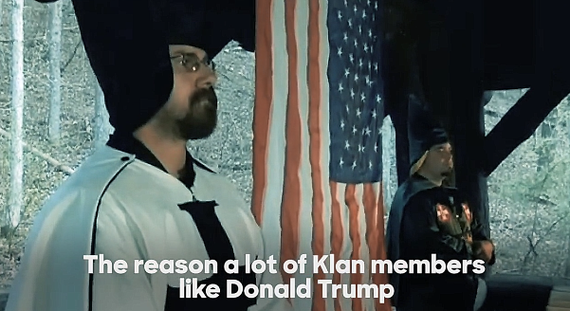 Secretary Clinton doesn't need to engage so intemperately with Mr. Trump. Yet it's no surprise that she has. You see, unlike 2012 GOP Presidential nominee, Mitt Romney, who was easily gamed by the Democratic race hustlers into shutting up and cowering back in fear, Donald J. Trump is fighting back. Not only that, he's literally asking for the black vote.

"How dare he? What gall!" the Democrats exclaim, loosely linking Trump to housing discrimination suits filed by the Justice Department against his father Fred back in the 1970s.

It's a courageous act by Trump that Mrs. Clinton treats like a grotesque violation of Tammany Hall quid pro quo. And as revelations about the commingling of staff and operations between the Clinton Foundation and the Hillary Clinton State Department suggest (thank you Politifact), Mrs. Clinton knows a whole lot about quid pro quo.

So far, Trump has spoken to mostly white audiences about the failures of Democratic policies to dramatically improve the lives, let alone the souls, of black folk. However, plans are afoot for him to speak before predominantly black audiences. This is good for our national discourse, even if, in his rhetorically clumsy way, Trump will find a way to step on the moment. Calling the socially progressive Mrs. Clinton a "bigot" - her policies are another matter - was one example of many that Trump needs to clean up.

Nevertheless, expect even more unhinged outrage by Mrs. Clinton as she and her supporters in mainstream media seek to conflate the Klan with Trump-style Republicanism. Alas, they need act quickly because Trump has stumbled upon a meme with staying power. That is, the divide in America is not between blacks and whites, but between insiders and outsiders. If Team Trump can connect the dots between the technocratic, government-knows-best, Ivy League arrogance of Hillary Clinton (poster child of the bloated and greedy political Establishment) and her corporate media enablers versus the unconnected and dispossessed in the inner cities, small towns and rural areas of America, watch out. 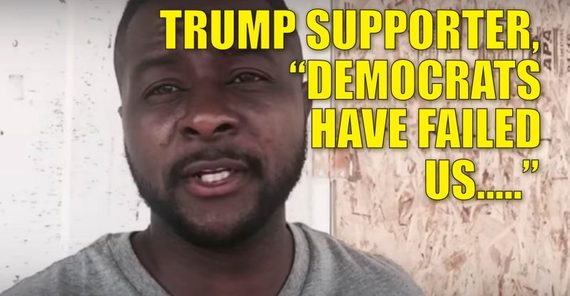 Meanwhile, at least one black voter, who might be a belwether of hidden black support for Mr. Trump, isn't buying what Clinton is selling. African-American writer Aaron Manaigo notes, "Hillary Clinton hopes that the media will chase this phony story so that they will cease from covering the real story which is the corruption, cronyism and 'pay to play' environment she allowed while she was America's top diplomat. She also wants to mislead African-American voters into believing that Trump's sincere and heartfelt outreach to minority communities is not real. In all honesty, the real bigots are the people who cynically take our votes for granted and pay lip service to the challenging issues that face our communities every day. For years, African-Americans have been told to vote for Democrats and things would get better. They haven't and in some cases things have gotten worse. Trump has challenged African-American voters to question their unfaltering allegiance to the Democratic Party. We should accept his challenge. After all, the definition of insanity is doing the same thing over and over and expecting a different outcome. The African American community deserves better than the failed Democrat policies of the last 50 years." 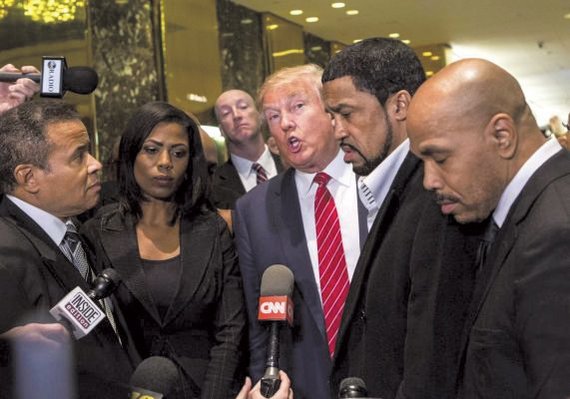 You already know black liberals' response to Mr. Manaigo. He's just another "Uncle Tom," a "traitor" to the race. However, if just 10% of black voters end up agreeing with Mr. Manaigo, Hillary Clinton is toast. No wonder she's freaking out.