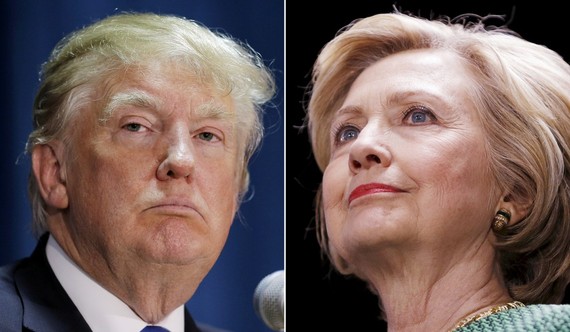 A day after the first Presidential Debate, here's my fundamental conclusion:

Clinton may have reassured undecided moderate voters -- especially suburban women and some remaining Republican moderates -- that Trump is dangerous and she's the stable, safer choice (with a big assist from Trump's bombastic statements and ugly facial gestures.)

But Clinton didn't do nearly enough to energize the base -- particularly the parts of the "Obama Coalition" consisting of millennials, African-Americans, and Latinos -- to ensure that they turn out for her in large enough numbers to guarantee a victory over Trump.

It's true that polls show most of the Obama coalition is backing Clinton in almost the same -percentages as backed Obama (although to date this is less true of millenials, who, in a recent McClatchy Marist poll logged 41% for Clinton, 23% for Johnson, 16% for Stein and 9% for Trump. In 2012 Obama won the youth vote 67%-30% Obama with young voters proving the decisive difference in Florida, Virginia, Pennsylvania and Ohio according to a Tufts University analysis which concluded that if Romney achieved a 50-50 split of the youth vote, he would have flipped those states to his column.)

But the real question isn't polling percentages but the raw number of Obama coalition voters who will actually turn out to vote for Clinton, particularly in swing states. A significant fall-off from 2008 and 2012 could still lead to a Trump victory.

And while the debate certainly gave Obama coalition voters ample reason to be against Trump, I'm not sure it gave them enough reason to be for Clinton with enough enthusiasm to drive the level of turnout necessary to ensure victory.

Yes, Clinton mentioned debt-free college. That helps with some millennials. But it would be a mistake to simply treat millennials as another interest group whom you win by offering them goodies -- They care about the future of the planet and need to be inspired with the hope of meaningful change.

For the next debate, and for the remainder of the campaign, Clinton needs to push aggressively on a handful of major talking points that the Obama coalition cares passionately about and that can convince them to turn out in large numbers to vote for her, some of which she mentioned in passing and much of which she ignored. Here's what Clinton needs say repeatedly with laser-like intensity:

• Climate change is the existential crisis of our times and, how we handle it, will determine whether life as we know it will be viable on this planet for our children and grandchildren. I will implement the Paris Climate Accord, reduce greenhouse gases, and invest in green technology that will create millions of good paying jobs. My opponent says climate change is a hoax perpetrated by the Chinese, that he will tear up the Paris Climate accord on day one, and will cancel environmental regulations. Four years of a President Trump may set the climate back so far that the planet will never recover.

• I will create millions of good paying jobs by investing in infrastructure, raising the minimum wage to a living wage, increasing social security benefits, and providing for debt free college. I'll pay for it my asking corporations and the wealthiest Americas to pay their fair share of taxes. My opponent will give the biggest tax cuts to the corporations and the top 1% in history and destroy millions of jobs (while enriching himself and his family.)

• I will fight for comprehensive immigration reform with a path to citizenship for long-time immigrants who work hard, pay taxes, and obey the law. My opponent will threaten millions of hard working people--like Dreamers and parents of children born in America--with their families being torn apart and being deported to countries that they hardly even know anymore.

• My opponent will deal with long-standing racial divides by making "stop and frisk," which falls largely on people of color, a national policy. I will bring communities and police together, support community policing, and end mass incarceration.

Is that wonky? Maybe a little, but not too much if it's a short list of fundamental issues that can be summed up in brief, punchy descriptions.

Repeated loudly and proudly, such positions could inspire the Obama coalition and give them positive reasons to come out to vote for Clinton in the large numbers that will be needed to defeat Trump.

If Clinton stays in her traditional comfort zone where her main goal is not to offend anyone, then she risks that the Obama coalition will remain uninspired, will turn out in substantially fewer numbers than in 2008 and 2012, and could hand the election to Donald Trump.