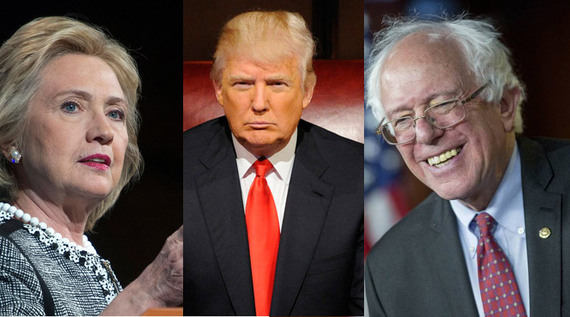 The final decision in this cage-wrestling match could go to the candidate who can convince a majority voters that the other candidate is more vile and dangerous, not to the candidate that credibly promises hope for a brighter future.

It could also reshape the electoral map and give a Trump-led Republican Presidential campaign the potential to flip the historically Democratic industrial Midwestern states like Ohio, Michigan, Indiana, Wisconsin, and Pennsylvania into the Republican column, thus possibly delivering the White House to Trump.

On trade, Trump would run to the left of the historically pro-"free" trade Hillary Clinton in those states and put them in danger for the Democrats. It's hard to imagine Hillary winning the presidency while losing more than one or two of those states, if that.

That's one of the reasons why those Democratic primary voters who are choosing Clinton over Sanders because they believe she's more "electable" may be fooling themselves.

Whatever one thinks of Bernie's politics, his honesty and character are unassailable and about the only personal line of attack for Trump would be to call him a communist.

Those are some of the reasons why Bernie consistently polls higher than Hillary in one-on-one matchups with Trump. And in terms of the electoral college, Bernie would likely have a better chance of retaining the industrial Midwest for Democrats than Hillary.

It may be too late in the process for the remaining Democratic voters and super-delegates to rethink the electability issue and vote for Bernie in sufficient numbers to give him the nomination, although Sanders supporters can still hope for a semi-miraculous upset. It would probably improve the Democrats' chances of defeating Trump.

And it's probably too late in the process for "establishment" Republicans to stop Trump, except in a brokered convention that would likely split the Republican Party.

So it looks like a nasty fear and loathing fall campaign between Clinton and Trump.

The Washington Post reports that Hillary and her allies are preparing a campaign playbook to show that Trump's business dealings and impolitic statements make him unfit to be commander in chief. People who suffered from Trump's business dealings will be featured in testimonial ads and media campaigns. The Post quotes one Democrat with longtime ties to the Clintons saying, "it's kind of mutually assured destruction. Both sides line up their nukes. It's going to be jus ugly and nasty and icky."

She lies so much. Everything she says is a lie. I've never seen someone who lies so much in my life. Let me tell you three lies she's told. She made up a story about how she was ducking sniper fire! There was no sniper fire. She made it up! How do you forget a thing like that? She said she was named after Sir Edmund Hillary, the guy who climbed Mount Everest. He hadn't even climbed it when she was born! Total lie! She lied about the emails, of course, as we all know, and is probably going to be indicted. You know she said there were weapons of mass destruction in Iraq! It was a lie! Thousands of American soldiers are dead because of her. Not only does she lie, her lies kill people. That's four lies, I said I'd give you three. You can't even count them. You want to go on PolitiFact, see how many lies she has? It takes you an hour to read them all! In fact, they ask her, she doesn't even say she hasn't lied. They asked her straight up, she says she usually tries to tell the truth! Ooooh, she tries! Come on! This is a person, every single word out of her mouth is a lie. Nobody trusts her. Check the polls, nobody trusts her. Yuge liar.

The problem is that in a race to the bottom, Trump could well be the winner.

Many of the accusations against Hillary are themselves lies and distortions.

But enough of them have the ring of truth to stick. She did make up a story about her plane landing under sniper fire. She claimed to have voted for George Bush's Iraq War resolution in the belief that he would just use it as leverage to allow weapons inspectors to do their job, when virtually everyone in the world knew that Bush and Cheney planned to invade Iraq. She's switched her political views innumerable times to suit the political climate. She supported NAFTA and called TPP the "gold standard" until she changed positions for her 2016 presidential run.

The ugly and negative race will likely sour even more Americans on the political process. With promises of hope and change turned as rotten as a week old banana, and both Clinton and Trump viewed negatively by a majority of voters, they may stay home in large numbers.

And a low turnout election tends to favor the Republican candidate. More Republicans in key battleground states may be determined to stop Hillary than Democrats are determined to stop Trump. Moreover, there are big questions whether parts of the Obama coalition, including African-Americans and young people, would turn out for Hillary in the same numbers with which they turned out for Obama.

Meanwhile, Bernie Sanders should resist calls from establishment Democrats to get out of the race, even if his path to the nomination has narrowed. There's still an outside chance Democrats could realize, that as polls indicate, he has the better chance of defeating Trump than does Clinton.

In any case, his campaign was never just about winning the nomination but about changing the political dialogue. He deserves the chance to take his message the 50% of primary voters who haven't voted yet.

And he's about the future: He wins overwhelmingly among young voters who are the future. Whether or not he wins the Democratic nomination, he's likely to be the only voice for hope and change in this election year in which both major parties are starting to crack up.

If there's a candidate of hope and change in this election season of fear and loathing, it's Bernie Sanders. And if we're going to keep hope alive when it's all over, it will be through the movement that he helped mobilize.