After Trump's asinine quip about a 2nd amendment "solution" to stopping Clinton's presidential run, her campaign manager, Robby Mook, had this to say:

"What Trump is saying is dangerous. A person seeking to be the President of the United States should not suggest violence in any way."

A presidential candidate should not suggest violence in any way?!? Really?

This coming from a high-level supporter of a candidate who...

...has supported every war during her political career?

...supported the use of civilian-butchering cluster bombs by Israel in Gaza?

...supported the brutal invasions by the Saudi dictatorship of Bahrain and Yemen?

...enthusiastically pushed for the bombing of Libya that turned it into a failed state?

...threatened use of nuclear weapons vs. Iran?

...supported the military coups against the elected governments in Honduras and Egypt, turning both into violence-ridden basket cases?

...adores as her mentor the arch war criminal Henry Kissinger, orchestrator of the tortures and killings of 10s of thousands?

So tell me, please, Clinton supporters, how is this not "suggest[ing] violence in any way."

Is it because threats of violence don't count when they're promoted against people who aren't Americans? Go ahead, probe the deeply caustic, Trump-like racism behind that assumption.

Last Friday, four days before Trump issued his violent threat and a few weeks after the constitution-waiving stunt at the Democratic convention, the ACLU and a federal court finally forced the release of the Obama administration's patently unconstitutional guidelines [2] for killing people with drones (nearly 90% of whom were not the intended targets).

And yesterday, while the Republican sociopath was issuing his threat, the Obama State Department approved the sale of more than $1 billion in arms to Saudi Arabia, no doubt to continue its bloody invasion of Yemen, where the UN recently estimated that two-thirds of the civilian casualties are caused by Saudi air strikes.

Where was the Democratic or Republican outrage against those very real, violent threats?

When Clinton wins the November election, will we stoop ever farther into an Orwellian world as our first "feminist" president continues to shovel billions in arms to arguably the most anti-feminist dictatorship on the planet? Where violence against people doesn't count as violence due to their nationality and/or the color of their skin?

If you're outraged about Trump's barbarous suggestion of 2nd Amendment "solutions" to elections, please don't stop there. Get your blood boiling and then also, and just as forcefully, challenge Clinton's own barbarous "solutions."

A third of the members of the United Nations have felt Washington's boot, overturning governments, subverting democracy, imposing blockades and boycotts. Most of the presidents responsible have been liberal - Truman, Kennedy, Johnson, Carter, Clinton, Obama...

One of the more violent presidents, Obama gave full reign to the Pentagon war-making apparatus of his discredited predecessor. He prosecuted more whistleblowers - truth-tellers - than any president. He pronounced Chelsea Manning guilty before she was tried. Today, Obama runs an unprecedented worldwide campaign of terrorism and murder by drone.

In 2009, Obama promised to help "rid the world of nuclear weapons" and was awarded the Nobel Peace Prize. No American president has built more nuclear warheads than Obama.

So please, no more sermonizing about stopping violence while taking a pass on condemning our government, then and now, "the greatest purveyor of violence in the world today." 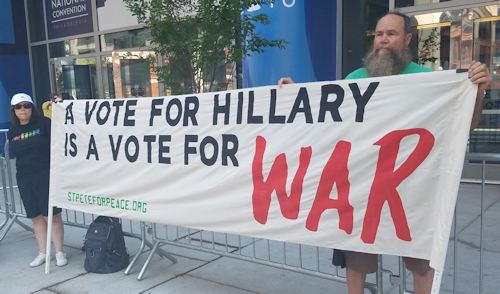