"There wasn't an unseemly amount of cleavage showing, but there it was. Undeniable," Givhan wrote. She said it was "startling" to see that small acknowledgment of sexuality and femininity peeking out of the conservative -- aesthetically speaking-environment of Congress.''

The existence of this story has already started some buzzing on a feminist listserve I am on about whether this sets back the cause of women. Don't worry. Others things may. This won't. But it's not news that Clinton shows a bit of chest. And I've got the photo to prove it.

Givhan routinely writes about the fashion lives of famous men and women, so I cut her a lot of slack; this is her beat after all. In an attempt to provide full coverage, I've asked presidential candidate Sen. Barack Obama (D-Ill.) where he buys his suits (Nordstrom and Bloomingdale's) and I asked him after a Sun-Times editorial board meeting last December if it he could confirm a tip I got that he took manicures from an upscale salon on Michigan Ave. in Chicago. After shooting me a look of irritated disgust, he said he did not.

But I've got something to add to the discussion: I see Clinton fairly often and she does not dress in an unfeminine way. Sure she wears pants suits all the time in the Senate -- most of the Senate women prefer pants suits to dresses and skirts (and most of the Democratic Senate women, I've noticed, wear pants more than GOP female senators).

On a hot Des Moines, Iowa night on July 3, Clinton, accompanied for the first time on the campaign trail with husband former President Bill Clinton, wore a bright deep salmon jacket, top, necklace and earrings. He wore a bright yellow shirt. The sherbet colored coordinated couple even cuddled up a few times. And guess what, take a look at the photo, she is distinctly showing cleavage. She's showing her feminine side. 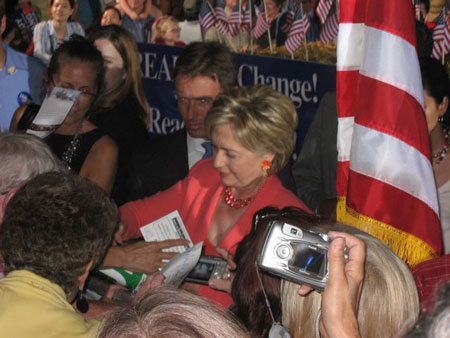 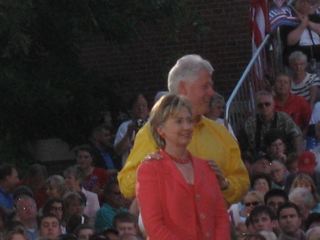 All presidential candidates are under the personal microscope. And since we are on the personal side, Obama -- he turns 46 on Aug. 4 -- the youngest candidate from either party running for president -- said recently on the campaign trail that's he's gotten a few gray hairs. Checked it out and it's true. 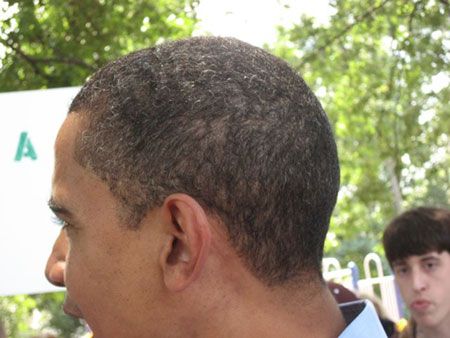