I choose drivers in India as I would a potential boyfriend: the man I would feel most comfortable with on a long trip together; after all, we may be spending hours on the road together, stopping to eat, or perhaps taking a swim in a river along the way. I always sit in the front seat, rather than go behind, which makes a difference.

This driver appealed to me immediately: calm, quiet, and yet offering ever so often a thoughtful comment--about his children, about deforestation (a big problem in India), about the spice industry--as we drove together to the Periyar nature reserve, both of us tranquil and quiet in the front seats, except when he would stop to pick a pepper plant for me, so I could taste a peppercorn, or slowed the car to smell the eucalyptus and teak trees. Once he pointed out his home, with clothes hanging to dry from the stoop. Another time, the dams making electrical power. And at lunch, he pulled into a roadside restaurant, filled with foresters, dressed in fatigue, and we shared a dosa, a big crispy temple of bread over a smattering of coconut curries.

When we pulled into the Periyar Nature reserve, my destination, the driver parked his car and joined me--with a grin--on my sudden impulse to see a tiger. We found a rickshaw driver to drive us deep into the wood--where I convinced the one sanctuary hotel--Aranyanivas--run by a kindly manager, to swim in his pool. No tigers, however, not even an elephant, except those on the cardboard posters that the rickshaw driver laughingly pointed out on the road.

If anyone is coming to Periyar, it should not be for the animals (unless deer excite you), but for the curious colony of Kashmir merchants, each selling jewels and pashmina scarfs along the road in town, dozens and dozens of cousins, brothers, uncles fighting to get the tourists' attention with: "My shop try!" One man told me how horrible it was now in Kashmir, how just yesterday, the Indian army had slaughtered 30 people in the street. A tricky situation, said another, for if India gave Kashmir its independence, there would be 26 states in India wanting independence as well. But we hate the Indians, said another, who mentioned that even with his studies, he could not get a job, as the prejudice against Muslims was high. It was why he ran a shop.

Another reason to visit Periyar: the graciousness. The owner of my 8 dollar hotel--spotlessly clean, with wide balconies over the lush jungle--shared a meal with me in her kitchen when she noticed I was hungry. Wordlessly (we spoke no common language), she ladled beans and curries for me from her stove, and then prepared a tray of tea in a silver pot. Her son later knocked on my door excitedly. "Come!" he said, leading me to the rooftop, so I could spot, hidden in the bushes....a deer.

The next morning I continued westward, towards the Kerala coast, after a lively breakfast conversation with a Spanish couple, who told me first about good beaches in Kerala and then that a girl in the neighboring village had been murdered that week by her cousins for eloping with her lover (they injected her).

The newspaper, "The Hindu", is filled with such stories.

The landscape of Kerala is exhilarating: the bus soars past sunny hills of tea plantations and eucalyptus trees, the sweet smell wafting through the open windows.
Indeed, India changes drastically from east to west: the dusty villages with rubbish in the streets, chai stands, dirty Ganesh altars and begging street-women, typical of Tamil Nadu, gives way to a deep green landscape, with large spiffy towns along the way, each sporting internet cafes, banks and hotels. The closer to the Keralan coast, the more cottages and new homes one sees along the road, including stucco churches and an occasional turreted mansion. Kerala, due to its privilege of water and heavy monsoons, is one of the richest states in India.

At Kottayam, a small inland city, home of Arundhati Roy, I took a rickshaw to the ferry, hoping to catch the last one through the backwaters to the famed town of Alleppey. Guidebooks tell you that a highlight in Kerala is to take a houseboat through these backwaters, at about 200 dollars a night.

What they do not mention is that a private cabin boat will take you for 5 dollars along the same way.

And what a boatride! I--the only passenger--put my head out the port and saw, alongside the river, the villagers tending to their tasks, independently and eagerly, nonetheless waving up to me with a big smile. The boat moved slowly through the canal as an old man washed himself with a white rag at the bank; a woman stood with her baby against her chest; a man husked a coconut with a big spear; a father and son fished with thick sticks and strings--there, the boy caught one! a tiny silver fish flipped into the grass; an adolescent wrung and whipped his black trousers in a stone basin; two fat goats tore at leaves; a girl in brown dingham came out of her house to wash a metal pot and gave me a beautiful smile; a boy biked his little brother on a rusty bike; two others ran down the road, wearing yellow-checkered trousers, one gaily touching the other's shoulders; a fat white-brown hen squatted on a rock; a bare-chested man moved towards the water, followed by a small white kitten; a boy splashed water at me as he jumped in the river.

The canal widened, opening into a wide lagoon, the white blue sky enormous, the isles lined with palm trees, tall in a semi-circle like a welcoming committee, the water and sky as far as one could see, with just a white stork standing along the lily pads and a small cobra snake squiggling under the water, as we broke through the pads ourselves, and in the distance a man in a yellow shirt rowed a wooden canoe.

A huge cormorant perched on a stick, shaking out two black fan-feathered wings.

The captain invited me to come out and sit on the top of the ship--so I stood up on the roof, alone in the sky and water, listening to the chirps of birds at dusk--there, a flock of small white sparrows flew off in a tree!--and then I lay on my back, watching a stork fly over me, its thin long legs as apparent as a wishbone against the whitened sky.

A ferry passed: many men cheered, one holding a small yellow lemon. He gestured; I lifted my arms! The lemon landed in my palms, still warm from the man's hands. I peeled it and ate the tangy pulp, letting the skin slip into the water.

Suddenly, through the lily pods, scary brown dark houseboats appeared, enormous brooding log cabins, seeming remnants of Mark Twain's Louisiana or a Disney ride through pirate-land. They eased to an evening rest by the isles, and I saw the men leaning in the cockpit, cooking.

By the time I reached Alleppey, it was pitch-night, and the water of the lake--the largest lake in South India, my captain told me--moved in dark swirls below the boat. The captain lifted all my luggage to the shore, and helped me find a small tree house for the night: a bamboo hotel room, where the owner climbed a ladder to bring me two buckets of hot water, to shower for the night. 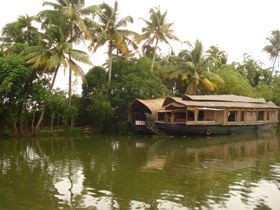 "I feel guilty about staying here," the young British social worker told me the next morning, as we both sunbathed at the pool, shaded by an apple tree, of the exquisite Raheem Residency hotel on the Alleppey beach. She had worked teaching handicapped adults in the Himmalayas, and the contrast--the luxury--did make her wonder. After all, we are sitting on Planter's Chairs, nineteenth century lounge chairs with wooden leg holders--once for the tea plantation owners to lie in while watching their workers in the fields.

Yet, how could one not cherish such a hotel? Formerly the 1860 mansion of a cloth merchant, it was bought just five years ago by two local Keralan businessmen and an Irish partner, and then refurbished--from ramshackle ruins to this--by a Cochin architect. Each room has antique rosewood furniture and thick bolts on the doors, topped with stained fan windows, as well as dark statues--tastefully placed--of Ganesh and Buddha, on hand-carved thalusi tables, originally used for prayer. The corridors to the pool and reception are lined with hibiscus trees, with marigolds and lotuses floating in bowls of water, and shelves and shelves of books.

I justify the hotel myself as I spent the time reading about the poor of India in the book, "India Untouched". The social worker--bookless--says she has a hard time admitting she just loves the chance to relax. 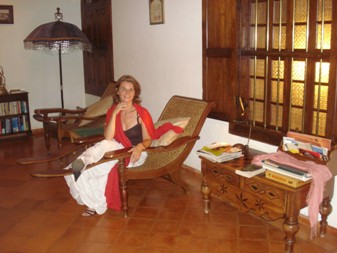 The dinner on the terrace over a milk moon-lit sea is romantic: at each table, a European couple speaks low over plates of fresh fish marsala and wine. One--an Italian couple--invites me to join them, he the pleasant owner of a family business nursery in Sicily, she, in a sparkling blue robes, hair pulled back in a glittering kerchief, the daughter of a biochemical fortune, both exuberant about the "India-ness" of India. We wave over another Italian couple, graphic designers, who later, in the rickshaw, confess to me they are intimidated by their compatriot rich. "But it will be the end of the world soon anyway," says the bald Neopolitan designer, very cheerfully. "Don't you realize this is the Kaliyuga age? The age of selfishness and war! Isn't that right, sir?" he taps our rickshaw driver on the back, who is gaily waving a small white flag (it is Independence Day in India).

"Yes, the Kaliyuga Age---this is what we are in," the rickshaw driver agrees and laughs.

Voting Made Easy
Register to vote and apply for an absentee ballot today
Register now
More:
healthy livingTravel TipsIndiaKeralaspirituality
Newsletter Sign Up
The essential guide to taking care of your mind and body
Subscribe to HuffPost’s wellness email
Successfully Subscribed!
Wellness delivered to your inbox