Rameswaram is a far eastern sliver of south India---a peninsula stretching out to Sri Lanka, which once could be reached with a boat, before the conflicts in the latter. It is one of the holiest sites in India, supposedly where Rama (of the Ramayana) thanked Shiva for helping him defeat the demon Ravana, king of Lanka, and later skipped across the rocks to rescue Sita, his wife. Today you can see families of pilgrims at the border of the sea, joyfully stepping in with their colorful clothes, to do pooja, a purification ritual, after having visited the temple. 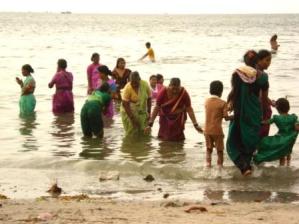 I rickshawed---with all my luggage---around this active tiny town, searching for a hotel, and wondering how it is that most people do not use the Lonely Planet in the correct way. It seems the majority actually go to the hotels listed in the book, rather than use these hotels as meeting points to ask passersby where the better, more interesting hotels are to be found. After all, even the best Lonely Planet hotel is often run-down, visited as it is by thousands of Lonely Planet tourists.

I stopped an elder Indian woman roaming in the street, her forehead smeared in white dust, and asked where she would suggest, and she directed my driver to the left of the temple, down a deserted thin road along the beach, where a clean white building offered balconies to the sea, far from the tourist peddling in the center.

"It's a bit isolated," I said to the owner, appreciating the sudden silence, the sound of wind in the palm trees, the boats quiet in the distance. "Where could I have coffee in the morning?"

A village woman--"very poor", the owner noted--was kneeling on the front steps with a big silver jar, and she ladled out milk coffees for us. Then she wrapped her turban on her head, in thick loops, placed the heavy jar on her head and strolled off.

"Tonight, if you like, she can bring us broiled fish, to eat on the terrace," the owner smiled. "Better than the restaurants."

I don't know why the Lonely Planet also always has a section on special problems for women traveling alone. I think it should be re-named "Advantages for Women Traveling Alone." I found out later I was the only guest in this hotel to be invited to the broiled fish dinner. Similarly, that afternoon when I searched rather late for a place for a lunch, and the restaurant owners of the Tamil Nadul lodge said the kitchen was closed, a man with a grin emerged from the kitchen and waved his hand. "Let her eat," he said. And brought me a thali of beans and rice.

And as I had problems with my bike kickstand--while stopped to watch a group of women chanting in a circle before the sea--a couple boys came immediately to my side to kick it up.

A few wild boars suddenly ran out in the road, the smallest baby boar looking like a giant rat.

I biked along the road to the north--far from the temple and village--passing a boy chasing three black goats and another rolling a tire with a stick, and then, after a few kilometers of breezy silence, I came upon a plastic altar, raised in the forest, where a nearly naked old man was praying. The statue behind the glass was of a winged man with a sword and sharp pointy shoes.

"Rama fighting the demon?" I asked three village women at the crossing.

"Michael the arch angel?" I said. "Are you Christian?"

"Yes, the whole village is," said one woman, waving her hand at the huts spottily located in the desert, over the spread of sand and brush.

Another point not mentioned in the guidebook.

I parked my bike at a tree, took off my sandals and walked along the softest sand through the trees, aiming for the red checkered lighthouse. There, behind the lighthouse, was the sea, empty of people, just boats and the sound of the wind in the ferns.

I lay back on a small boat, made of roped logs, the size exact for one human being lying, and looked at an immense blue concave sky. In the water, plastic bottles tied to ropes floated quietly: the buoys for the fishing boats located in the distance. I tread into the water, warm and thick, stepping on algae, until I could swim between the ropes. The breeze moved the sea in ripples.

When I came out, I found three young men sitting in the sand, weaving green stalks together, with a sharp knife.

"It's this," one boy said, bare-chested----gesturing to some finished green fishing nets sitting under some palms.

"Tomorrow," said another. "We take you out on the boat to swim."

"Thanks!" I said. It was true, swimming by the ropes was a bit clumsy, as I could only walk up to my knees.

My bike was where I had parked it, still in the sandy desert, and I biked on, looping along the thin tar road in the forest, passing men with fire-sticks piled on their bikes and women washing clothes in tin buckets who called out big hellos. The only gesture that marred the sense of peace were the children who greeted me each time with "pen", "pen." Ah tourists had also come to this village and ruined the children--turning them into beggars--with what seems like a generous offer of a bic.

So far it is my favorite temple in India, perhaps not for sacred reasons, but for the pleasure of walking barefoot along the long 800 year old corridors, the cement smoothened by thousands of pilgrim footsteps, to stop at each of 22 wells, to receive a blessing of a pail of water, dumped on my head. In the heat, the splash of water drenching my hair and clothes is a blessing in itself. The Brahmin sometimes dips the silver pail--extended by a long rope--into the deep theertham twice, and asks me to drink. It tastes salty, and comes right from the sea.

Running along the high ceilings of the solemn four corridors of this Dravidian temple are 1200 colored lotus kamalans, each a bright original surprise in the cool gray silence. 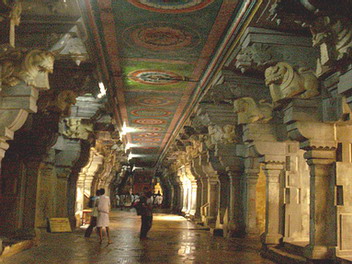 It is in the inner sanctum of the temple that the noise level is higher, as my fellow wet temple-goers--half-naked men with long grey braids, families with children, groups of women in pink saris--line up to ask for luck at stations of the gods. One young woman smiles at me and gestures that I am to place my hands over the fire coming from the flaming oil, and then press orange powder to my forehead. I follow her as well when she beckons me to lean on the concrete floor, before a piece of wood, and she nods with approval when I cup my hands over the flames before one of seven statues of the Lakshmi sisters.

The lingam (Shiva's 'phallus") that most impresses me is a thick hunk of bronze metal, misshapen, a "jodir lingam", I am told, that I should pray to to get rid of my worries.

As for success in work, I pray to Mahahakishna behind a cage, and then toss the flower-garland around my neck into a small lake in the temple, where lilies float. For my dream desire, I am told I am to line up in front of a statue of Parvati, Shiva's wife, where a man bears a torch of flames.

The temple--despite the hundreds and hundreds of pilgrims--has a very relaxed feel. Indeed one family of four sleeps between two pillars, while another takes their lunch on banana leaves. The elephant in the middle of the temple also seems relaxed, his thick legs firm on the cement, and eyes still under the white line of paint on his forehead, which signifies "Shiva."

The rickshaw got stuck in a pile of sand on the road to Adam's Bridge, the chain of reefs that form stepping stones to Sri Lanka, which Rama supposedly skipped across to rescue his wife Sita.

"This is better," the rickshaw driver said, pointing. "You swim here."

He was right. Through a forest of thin trees, I spied a wide spread of the most pristine beach, the waves high in blue-white foam.

I walked alone on the beach, deserted except for a few straw huts near the sea, and two canoes fixed in the sand.

The waves were a strong rush of current--warm and fast--which tossed me round and round like a washing machine. I happily choked in the salt.

When I got out, I found a great white decaying carcass on the beach before me.

Could it be a former cow? The slivery flesh stuck on highly arched ribs, and where the head was, I touched two polished bones--perhaps horns. But there was also a long tail, with thick giant vertebrae, flopping back and forth with the outtake of the waves.

"No," said an elderly fisherman, who walked up to join me. "This is dolphin. Ten days lying here."

He invited me to his gathering of huts--where three little girls jumped up and down excitedly--their faces shivering with smiles--and a mother sat on the sand floor . "Would you like some tea?" the fisherman said with a wide welcoming wave. He went to boil milk tea in the "kitchen" area in the hut, while I looked at a photo album of the family, taken by an Italian tourist who had stayed in the adjoining hut one Christmas, a hut like the others woven out of palm grass, with a bumpy sand floor. There were six children, all very thin, gathering next to me to peer at the photos. They went to school, the grandfather explained to me, every day, at a school down the road.

The little girls and boys skipped after me as I swam back in the sea, and then joined me running to my clothes at the canoe, picking up tiny shells and giving them to me as gifts to bring home. 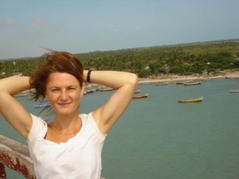